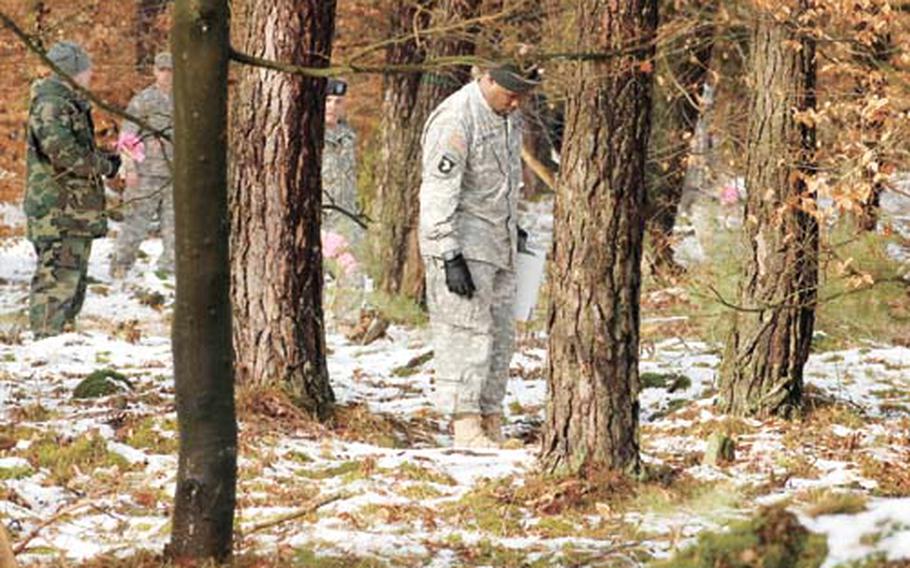 In this February photo, soldiers search the site where a U.S. Army Black Hawk helicopter crashed. The helicopter was on its way to Coleman Army Air Field in Mannheim when it went down in a thick patch of woods. Three soldiers were killed in the crash. (Michael Abrams/S&S )

Read an Editor&rsquo;s Notes blog post about mistakes in this storyhere.

Clarification: This story implied that excess fuel in the external tanks contributed to the accident. Stars and Stripes failed to include in the story that the lead investigator stated in the report: &ldquo;... Due to the small difference in actual weight, and additional available weight capability, I cannot identify that the excess fuel caused or contributed to the incident.&rdquo; In addition, because of incomplete information received from the U.S. Army, the story should have said that one of the three victims of the crash, Gary M. Farwell, was posthumously promoted to Chief Warrant Officer 4.

Correction: The original story has been changed. Due to incorrect information provided by U.S. Army Europe, the story stated no helicopters in USAREUR are equipped with flight data recorders. In fact, USAREUR officials said they were only referring to the command's Black Hawk helicopter fleet.

WIESBADEN, Germany &mdash; Investigators were unable to determine the cause of the Feb. 3 Army helicopter crash that killed three U.S. soldiers near Mannheim, Germany, but revealed several miscues made by the unit and the flight crew before takeoff.

The purpose of the ill-fated UH-60 flight, dubbed Duke 27, was to conduct pilot proficiency training, according to V Corps&rsquo; 15-6 investigation report, released Nov. 2.

The flight left Stuttgart Army Airfield and crashed during its final approach to Coleman Army Airfield into a forested area with pine and oak trees averaging more than 100 feet tall. The helicopter hit the trees at more than 160 miles per hour.

According to the 15-6, the crew did not receive proper authorization for the flight, flew with an expired weather brief, and loaded the aircraft with more fuel than was authorized.

The report said the degree of destruction to the aircraft and its components, along with not having a flight data recorder or cockpit voice recorder on board, prevented investigators from determining the cause of the crash.

&ldquo;The Army should equip all helicopters with flight data recorders, given the invaluable function and information they can provide in identifying the cause of future accidents,&rdquo; said the lead investigator in the report, whose name was redacted before the report was released. USAREUR officials refused to grant an interview with the investigator or unit leadership.

Joe Garvey, USAREUR deputy chief of Public Affairs, said in an e-mail that the names were omitted from the 15-6 to protect the privacy interests of the individuals and would not authorize interviews for that reason.

Killed in the crash were Warrant Officer 3 Gary M. Farwell, 39; Chief Warrant Officer 2 Clayton M. Hickman, 32; and Cpl. Matthew E. Clark, 25. Farwell was the pilot in command for the mission, Hickman was the pilot and Clark was the crew chief. All three were assigned to the Stuttgart-based Company G, 52nd Regiment, 1st Battalion, 214th Aviation Regiment, 12th Combat Aviation Brigade.

The crew&rsquo;s weather brief from the 21st Operational Weather Squadron at Sembach Air Base indicated the weather was sufficient for the mission. Weather briefings remain valid for 90 minutes and the crew departed 103 minutes after receiving their brief, according to the investigation.

The report said there is no evidence that the aircraft&rsquo;s violation of the weather brief expiration contributed to the incident, although at the time of the crash, it was raining heavily and visibility below the clouds was about one mile, according to a German weather service spokesman.

Shortly after takeoff, the crew radioed in that they were encountering icing and were authorized to lower their altitude. A German commercial pilot also reported moderate icing conditions in the area around the same time as the crash.

The 15-6 also noted things that were not done according to policy, but didn&rsquo;t have a direct link to the crash.

According to the report, the flight&rsquo;s company commander sent a text message to Farwell approving the mission. Army regulation requires initials from the approving authority on an Army form, known as DA Form 5484, or oral approval if necessary.USAREUR officials said no legal disciplinary action was taken.

A former U.S. Army helicopter test pilot, contacted by Stars and Stripes to comment on the report&rsquo;s findings, said the combination of errors might have stemmed from the crew&rsquo;s apparent urgency to make the training flight.

&ldquo;One&rsquo;s gotta ask, what&rsquo;s the urgency that causes these types of mistakes &hellip; when you violate these rules, you wonder what else is going on,&rdquo; said James T. Crouse, now a Raleigh, N.C., aviation accident lawyer.

The flight crew also loaded each external tank with 200 gallons of fuel when the briefing officer only authorized 100 gallons for each tank.

First responders arrived at the scene 32 minutes after the crash alarm sounded and the accident caused a fire that burned for approximately two hours, according to the report.Investigators were unable to determine why extra fuel was loaded, because fuel had been requested on the flight plan and was available at Coleman.

The commander, whose name also was redacted from the report, told the investigator that the amount of fuel was &ldquo;excessive for the flight&rdquo; and he would not have approved the flight if he had known about it.

&ldquo;Those procedures are there for a reason. Anytime you violate those procedures, you have to look at that as a way that could have caused the crash, directly or indirectly,&rdquo; Crouse said.

The U.S. Army Combat Readiness/Safety Center at Fort Rucker, Ala. also is preparing an accident investigation report, but it won&rsquo;t be complete for two to four months, according to strategic communication director Mike Whetston. Whetston would not discuss the results of the toxicology report or comment whether drugs or alcohol were a factor in the accident.