Acting U.S. ambassador to Ukraine Joseph Pennington speaks in the port of Odessa during a ceremony at which two retired U.S. Coast Guard Island-class patrol boats were officially transferred to the Ukrainian navy on Wednesday, Nov.13, 2019. (U.S. Embassy in Ukraine)

Acting U.S. ambassador to Ukraine Joseph Pennington speaks in the port of Odessa during a ceremony at which two retired U.S. Coast Guard Island-class patrol boats were officially transferred to the Ukrainian navy on Wednesday, Nov.13, 2019. (U.S. Embassy in Ukraine) 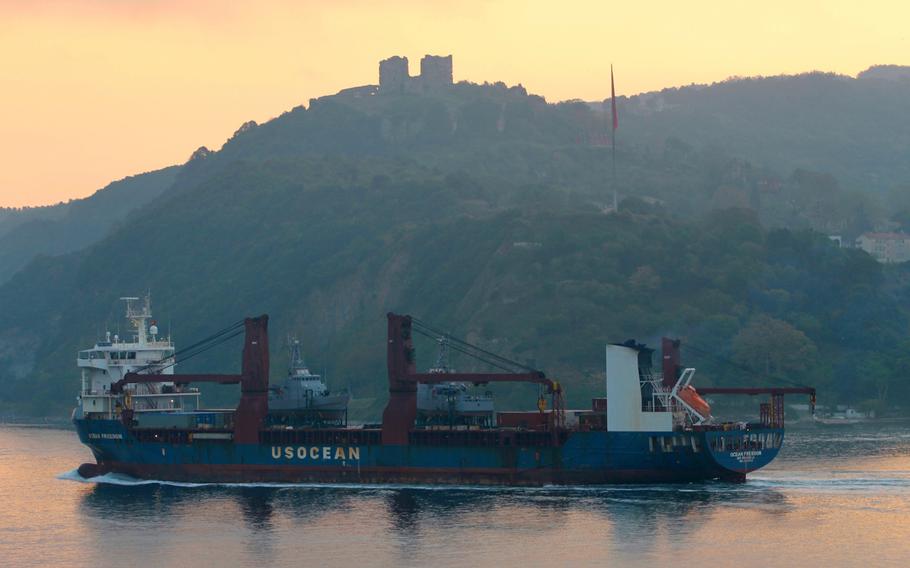 STUTTGART, Germany — The U.S. has transferred two Island-class patrol boats to Ukraine and plans to send three more to help boost the country’s navy, which is heavily outgunned by Russian forces.

The two retired Coast Guard vessels were formally handed over to Ukraine at a ceremony in the port of Odessa on Wednesday — the same day that U.S. diplomats testifying in an impeachment hearing in Washington said delays in American military aid have raised doubts about the Trump administration’s commitment to Ukraine.

The boats represent a portion of the $1.6 billion in security assistance provided to Ukraine since 2014. While Ukraine didn’t pay for the former Coast Guard cutters, which it received under the Excess Defense Articles program, it did pay for the boats’ transfer and for Ukrainian crews to be trained, the U.S. Embassy in Kyiv said.

Three additional Island-class patrol boats will be handed over in the near future, the embassy said.

Joseph Pennington, acting U.S. ambassador in Ukraine, said during the ceremony in Odessa that the high-speed vessels will bolster the Ukrainian navy’s ability to “defend the nation’s sovereignty and territorial integrity,” according to a statement Wednesday.

“The boats will also provide greater situational awareness in the Black Sea, increasing the security of Ukraine’s coastline and shipping lanes, and they will help Ukraine to prevent smuggling through its waters,” Pennington said.

But as Pennington talked up America’s solidarity with Ukraine, the top U.S. envoy in the country blasted a Trump administration decision to withhold security assistance during the summer in the hope of getting Ukraine to investigate political rival Joe Biden and his son, Hunter.

“To withhold that assistance for no good reason other than help with a political campaign made no sense,” William B. Taylor, Jr. told the House Intelligence Committee during Wednesday’s impeachment hearing. “It was counterproductive to all of what we had been trying to do. It was illogical. It could not be explained. It was crazy.”

“I think the signal that there is controversy and question about the U.S. support of Ukraine sends the signal to (Russian President) Vladimir Putin that he can leverage that as he seeks to negotiate with not only Ukraine but other countries,” Kent said.

The House impeachment hearings center on an allegation by Democrats that President Donald Trump withheld $391 million in military aid to Ukraine, and used the funds as leverage to try to persuade the government in Kyiv to investigate Biden. The funds were released after the issue came to light last summer.

House Republicans have denounced the proceedings as politically motivated.

Ukraine has pushed for more U.S. military support as it fights Russian-backed separatists in the east of the country. Moscow’s 2014 military intervention in Ukraine culminated in the annexation of the Crimean Peninsula, which Russia now regards as part of its territory.

“We do not and will not recognize Russia’s purported annexation of Crimea,” Pennington said during the ceremony in Odessa, adding that Washington will continue to provide security assistance to Ukraine “in the face of Russian aggression.”