US to add 500 new Wiesbaden-area soldiers in Germany, Austin says 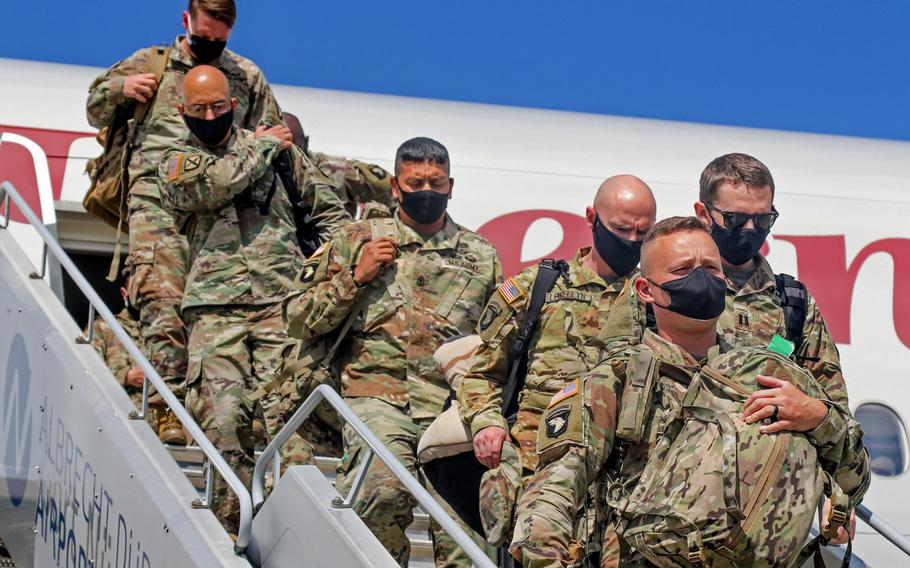 Soldiers of the 101st Airborne Division arrive at Albrecht Duerer Airport in Nuremberg, Germany in support of Operation Atlantic Resolve in June 2020. Defense Secretary Lloyd Austin announced during a visit to Berlin on April 13, 2021, that the U.S. will base an additional 500 troops in Germany. ( Alleea Oliver/U.S. Army)

Soldiers of the 101st Airborne Division arrive at Albrecht Duerer Airport in Nuremberg, Germany in support of Operation Atlantic Resolve in June 2020. Defense Secretary Lloyd Austin announced during a visit to Berlin on April 13, 2021, that the U.S. will base an additional 500 troops in Germany. ( Alleea Oliver/U.S. Army) 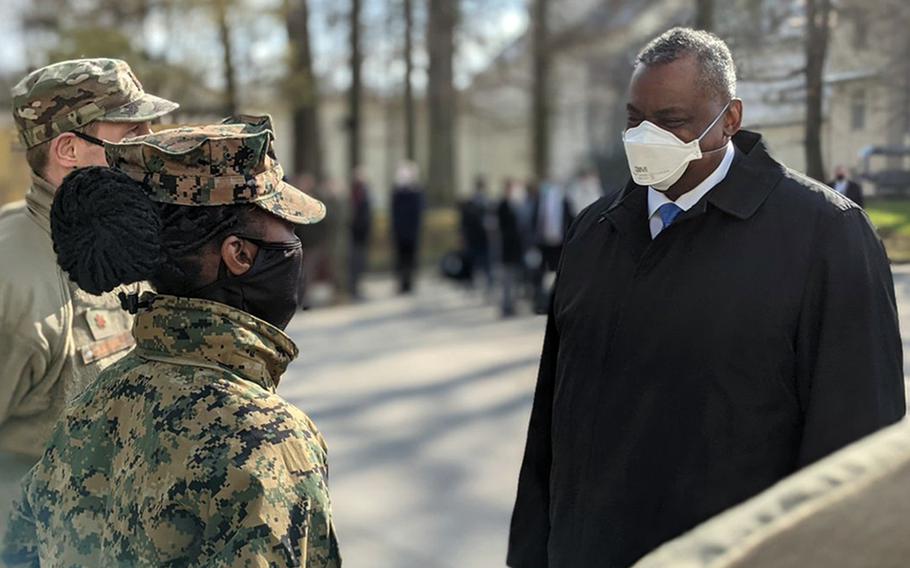 “These forces will strengthen deterrence and defense in Europe. They will augment our existing abilities to prevent conflict, and, if necessary, fight and win,” Austin told reporters in Berlin, following his meeting with German Defense Minister Annegret Kramp-Karrenbauer.

About 500 more troops will be based in the Wiesbaden area, home to U.S. Army Europe and Africa headquarters, Austin said. The deployments could begin as early as the fall, the U.S. defense chief said.

“This move will also create more space, more cyber and more electronic warfare capabilities in Europe,” said Austin, who is traveling on his first trip through Europe as defense secretary.

The added troops will “greatly improve our ability to surge forces at a moment’s notice to defend our allies,” he said.

The units include a wide range of sophisticated weaponry, such as field artillery, air and missile defense, electronic warfare, space and aviation elements, USAREUR-AF said.

The Army also said it will hold on to Mainz-Kastel Station, Mainz-Kastel Housing and Dagger Complex in Darmstadt, all of which had been slated for turnover to Germany.

“New strategies and a continuously changing operations environment requires more capacity to ensure we have the necessary infrastructure for increased capabilities to support our Allies and partners,” Maj. Gen. Chris Mohan, commander of the 21st Theater Sustainment Command, said in a statement. “We’ve worked closely with German officials to come to an agreement on retaining these sites and are very appreciative of their continued support.”

In February, the U.S. halted plans to move troops out of Germany while the Pentagon reviews how its forces are positioned worldwide. That assessment is expected to be completed in the summer.

When asked at a joint press conference whether the additional 500 troops means Washington won’t carry out Trump’s proposal, Austin said the Pentagon has “ceased planning” for troop reductions, in line with what was announced in February.

Kramp-Karrenbauer said she had President Joe Biden’s word that “there will be no troop reduction as was previously planned,” The Associated Press reported.

“Today I received the pleasing announcement and assurance from Secretary Austin that, instead, 500 more will be stationed here,” she said. “That’s how it should be among good friends and partners -– you give each other your word and keep to it.”

There are about 35,000 troops stationed in Germany, along with tens of thousands of family members and civilian workers.

The plan for reducing the military mission in Germany called for relocating U.S. European Command from Stuttgart to Belgium, returning the Vilseck-based 2nd Cavalry Regiment to the U.S. and other moves that would have culminated in the largest realignment of Europe-based forces in decades.

Retired Lt. Gen. Ben Hodges, who commanded the Army in Europe until 2018, said the announcement was a sign that the Biden administration intends to reverse course on the Trump proposal.

“It definitely is reassuring to know that the administration values having a forward-based military capability and headquarters in Germany,” Hodges said. “This is much better than hearing we are pulling out.”

Kramp-Karrenbauer said German and U.S. soldiers “stand side-by-side in a number of operations" and that the bilateral military partnership is growing.

Austin added that the planned troop increase underscores the U.S. commitment to both Germany and the NATO alliance, which was repeatedly criticized during the previous administration.

Later Tuesday, Austin was scheduled to meet with U.S. troops in Stuttgart before heading to NATO headquarters in Brussels, where he will also meet with Secretary of State Antony Blinken.

Austin and Blinken are expected to discuss the future of the U.S. mission in Afghanistan with allies as well as concerns about Russia’s military buildup around Ukraine in recent weeks.