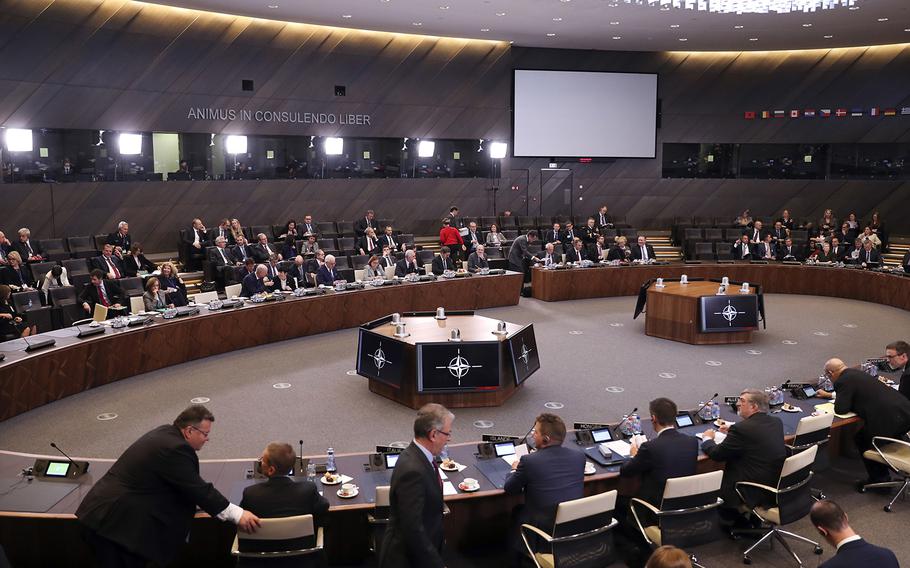 A general view of a meeting of the North Atlantic Council at NATO headquarters in Brussels, Tuesday, Dec. 4, 2018. (Francisco Seco/AP)

Russia has 60 days to come into compliance with a key nuclear treaty or else Washington will begin the process of quitting the landmark accord, U.S. Secretary of State Mike Pompeo said Tuesday.

“We either bury our head in the sand or we take common sense action,” Pompeo said after talks at NATO headquarters in Brussels.

Pompeo issued the ultimatum after discussions with NATO foreign ministers over Moscow’s alleged violations of the 31-year-old nuclear treaty.

The Trump administration has been warning for months that it was prepared to cease compliance with the 1987 Intermediate-Range Nuclear Forces Treaty between Washington and Moscow.

The U.S., going back the administration of former President Barack Obama, has accused Russia of developing a new missile system that violates the terms of the pact.

NATO members formally agreed Tuesday that Russia’s new 9M729 missile was in breach of the decades-old deal between Washington and Moscow that bans missiles with a range between 310 and 3,400 miles, and that it poses a new threat to Europe. NATO’s top official has warned that the new missile system could hit European capitals with only minutes notice.

NATO Secretary General Jens Stoltenberg said Tuesday that time was running out to save a treaty that has been a cornerstone of European security policy.

“Russia now has a last chance to come back into compliance with the INF treaty, but we must also start to prepare for a world without the treaty,” Stoltenberg said.

Pompeo’s ultimatum was not unexpected.

German media has reported that the U.S. was poised to terminate the deal in Brussels this week, but a last-minute agreement between President Donald Trump and German Chancellor Angela Merkel resulted in a plan to delay the decision in hopes of a breakthrough with Moscow.

Stoltenberg said abolishing the treaty would be a “big setback” for European security.

Russia, meanwhile, has denied that it is in violation of the missile agreement.

Moscow says it will consider military countermeasures should Washington follow through with its plan to quit the treaty.