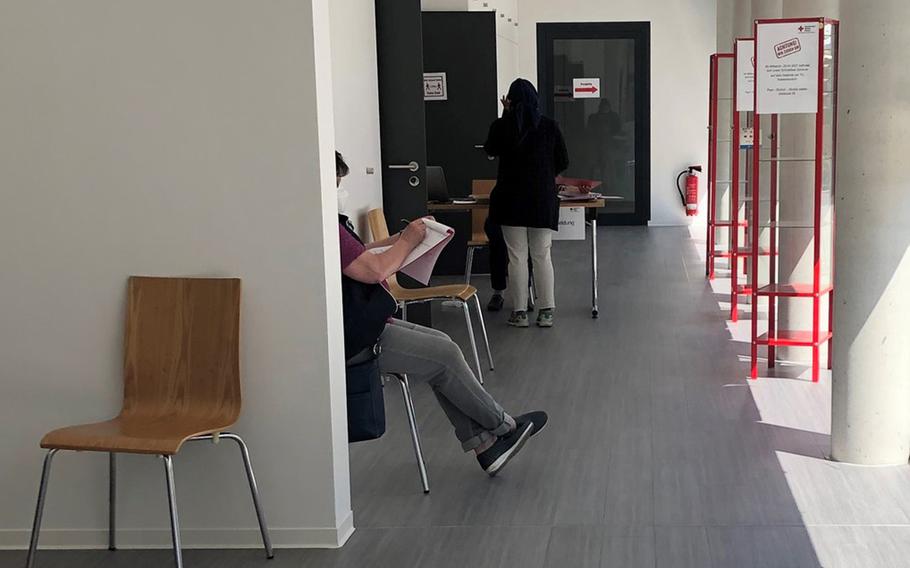 Buy Photo
A woman fills in a form as another checks in for a coronavirus test at the German Red Cross in Kaiserslautern, Germany, April 26, 2021. Symptomless Americans living in Germany, including service members, are eligible for one free antigen test per week, including at the Red Cross, an official there said May 17, 2021. (Karin Zeitvogel/Stars and Stripes)

Buy Photo
A woman fills in a form as another checks in for a coronavirus test at the German Red Cross in Kaiserslautern, Germany, April 26, 2021. Symptomless Americans living in Germany, including service members, are eligible for one free antigen test per week, including at the Red Cross, an official there said May 17, 2021. (Karin Zeitvogel/Stars and Stripes) 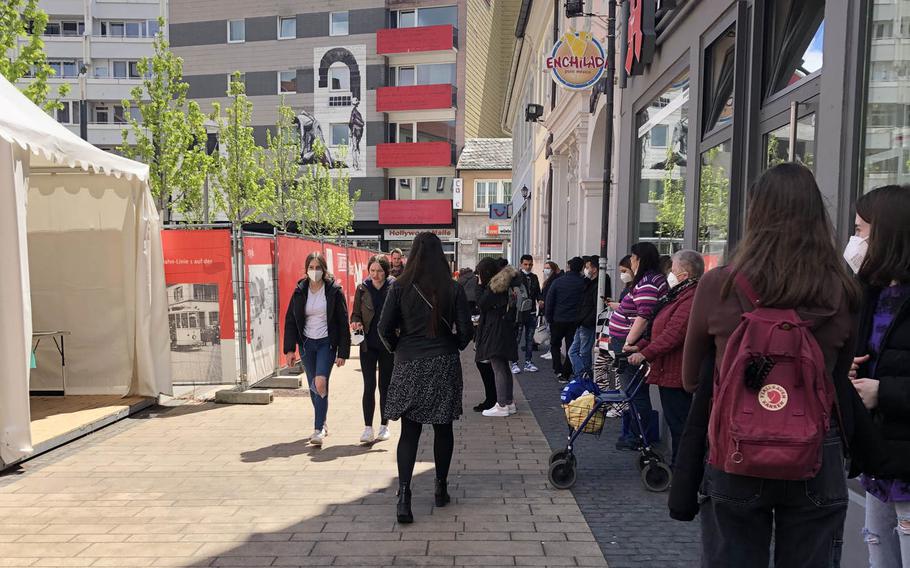 Buy Photo
People wait in line for a free coronavirus antigen test in Schillerplatz, downtown Kaiserslautern, Germany, on May 17, 2021. U.S. service members, contractors and their families, who previously paid for the tests, can access them free-of-charge once a week, German health officials said. (Karin Zeitvogel/Stars and Stripes)

KAISERSLAUTERN, Germany — Coronavirus antigen tests are free for U.S. service members and other Americans living in Germany, including at the Red Cross, where some in the large U.S. military community have been charged nearly $50 to be tested, health officials said.

The change took effect early this month after the federal health ministry quietly removed a clause from its rules, said Marco Woltermann, director of the German Red Cross’ Kaiserslautern operations.

“We had a spoken agreement about this, but now the clause has been dropped, meaning members of the U.S. military have the right to a so-called citizen’s test once a week,” he said by email.

Any legal resident of Germany “has the right to a free test,” a spokesman for the health ministry in Berlin confirmed by phone Monday. American service members, Defense Department contractors and others covered by the Status of Forces Agreement are considered legal residents of Germany.

Antigen tests are valid for travel to the U.S. if they are conducted within three days of the scheduled departure from Germany, the U.S. Centers for Disease Control and Prevention says on its website.

U.S. citizens, residents, travelers who will be passing through the U.S. and those who are fully vaccinated have to show a negative test result, in either electronic or print form, when they check in for their flight, American Airlines said in an email sent to Stars and Stripes last week.

The only exceptions are children under the age of 2 and people who have had COVID-19 and recovered within the three months preceding travel, the CDC and American Airlines said.

Those who have had the virus must show proof of recovery and a letter from their health care provider or a public health official, saying they are allowed to be out of isolation and have been cleared to travel, the CDC says on its website.

Air passengers are also required to attest that the information they are presenting is true, it says. The attestation form is available on the CDC’s website or via the Verifly app. Airlines will provide a hard copy of the form to passengers who haven’t filled one in prior to arriving at the airport.

The attestation must be completed before arrival in the U.S.

In Germany, rapid antigen tests are available to people without symptoms at centers outside many businesses. The German Red Cross in Kaiserslautern has moved its test center from its headquarters building on Augustastrasse to the Technical University’s sports area, on Paul Ehrlich Strasse.

The Kaiserslautern center is open seven days a week, Woltermann said. Like many other test centers, it requires an appointment, which can be made online at https://drk-kl-uni.probatix.de/de/pick-slot.

“The test takes about 90 seconds,” Woltermann said. The results are emailed to the person who was tested, usually within 15 minutes, he said.

The Red Cross also offers tests in the surrounding region, including in Ramstein, Landstuhl and many villages where Americans live, and at centers around Bavaria, in Stuttgart and Wiesbaden.

Antigen or PCR tests are also required for Americans traveling to Germany from the U.S., the German Health Ministry said last week. Antigen tests must be no more than 48 hours old and PCR tests no more than 72 hours old on arrival in Germany, a ministry spokesman said. Passengers arriving from the U.S. also have to complete an online registration form before entering Germany.

Fully vaccinated Americans who live in Germany or are visiting on official business no longer have to quarantine on arrival in the country, the health ministry said.

But just as the U.S. remains closed to most Europeans, Germany has not yet reopened to U.S. leisure travelers.