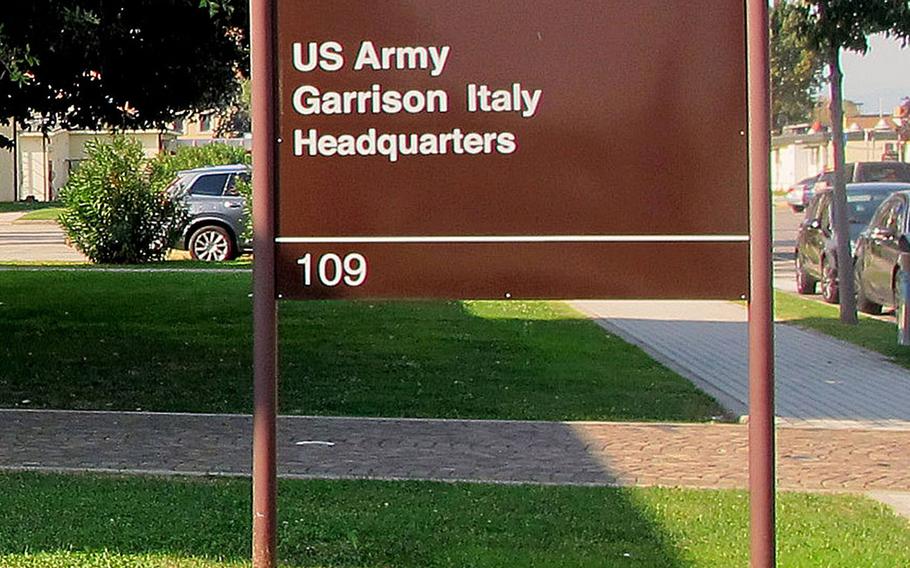 A Vicenza soldier was hospitalized with the disease caused by the coronavirus Wednesday after being taken by ambulance from his barracks on Caserma Ederle at U.S. Army Garrison Italy. (Nancy Montgomery/Stars and Stripes)

VICENZA, Italy — A U.S. soldier in Vicenza was hospitalized earlier this week with the disease caused by the coronavirus after being taken by ambulance from his barracks on Caserma Ederle, U.S. Army Garrison Italy officials said Friday.

He is the first U.S. soldier to test positive for the coronavirus in a garrison of some 7,000 soldiers, as Italy’s climbing death rate for the first time surpassed that of China, where the virus first began circulating widely in December.

The soldier, a sergeant with the 207th Military Intelligence Brigade, was expected to be released from Italy’s San Bortolo Hospital and recuperate at an isolation barracks on Caserma Ederle, base officials said Friday.

He had been in quarantine in his barracks with “flu-like symptoms,” the garrison said, prior to his hospital admission Wednesday.

“In the barracks, control measures were immediately activated to trace potential infections and quarantined all the people with whom the (soldier) has been in contact,” the garrison’s Facebook page said.

About seven people have been initially identified as close contacts, the garrison said.

Italy has been the epicenter of the pandemic in Europe. To date in Italy there have been 41,035 total coronavirus cases, according to national authorities, with 4,440 people who have recovered and 3,405 who have died. There were 3,242 total coronavirus deaths in China, the World Health Organization reported Thursday.

In Veneto, the region which includes Vicenza, more than 3,750 people had been infected with the coronavirus and 130 have died as of Thursday, regional authorities said.

A total of 455 patients are in the Vicenza area; 94 of these are hospitalized in a noncritical area, with 27 in intensive care.

Since March 13, San Bortolo has been focused on coronavirus patients, otherwise performing only obstetrical care and emergency surgeries, and admitting only patients whose diseases can rapidly worsen.

The country has been on lockdown since March 9 to help slow the spread of the virus, with schools and stores closed and travel prohibited, except for essential work, emergencies, and trips to the doctor or to buy groceries. The U.S. military has for the most part followed suit.

On Thursday, the garrison removed sports equipment from an outdoor track, saying people had violated Italian rules by congregating there and by driving to the base to exercise.

Veneto governor Luca Zaia added new restrictions Friday, closing all parks and gardens, and said anyone on a bicycle or walking should not stray more than 200 meters from their homes.

Vicenza previously reported that two Italian base workers had tested positive for the virus, along with three Italian workers at Camp Darby in Livorno.

Two Naples-based sailors had also either tested positive or were presumed positive for the virus pending lab testing, service officials said. The two shared a workspace and both have been quarantined at home since March 6, when the first tested positive, U.S. Naval Forces Europe-Africa said.