US pushes to revitalize NATO, but dispute persists with key ally Germany 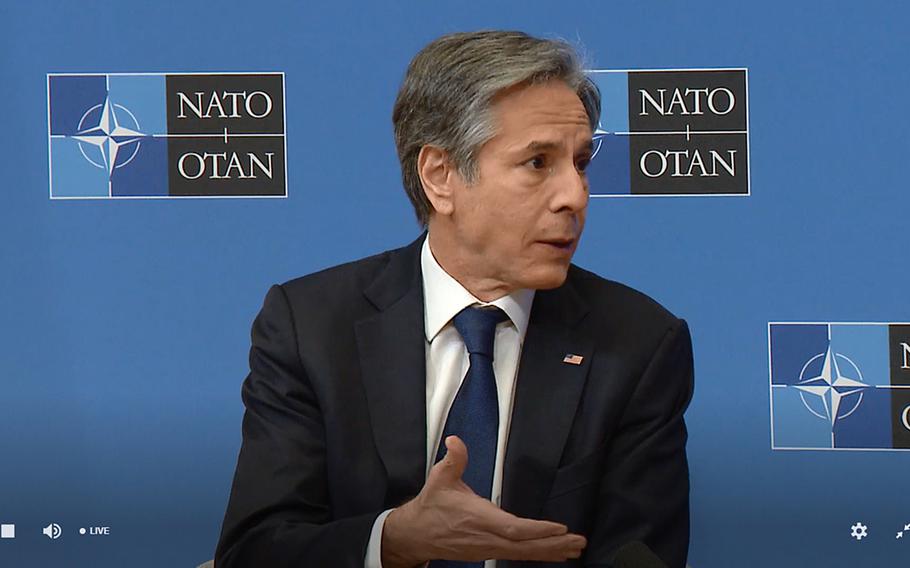 Secretary of State Antony Blinken speaks during a moderated discussion with NATO Secretary-General Jens Stoltenberg, March 23, 2021. Blinken is at NATO headquarters in Brussels for two days of talks with alliance foreign ministers. (Screenshot/NATO)

Secretary of State Antony Blinken speaks during a moderated discussion with NATO Secretary-General Jens Stoltenberg, March 23, 2021. Blinken is at NATO headquarters in Brussels for two days of talks with alliance foreign ministers. (Screenshot/NATO) STUTTGART, Germany — Germany’s plan to open a new gas pipeline with Russia poses a threat to European security, America’s top diplomat warned Tuesday, highlighting a key point of contention with allies even as Washington aims to revitalize ties with NATO that were strained during the Trump administration.

U.S. Secretary of State Antony Blinken said he expected to bring up Berlin’s subsea Nord Stream 2 pipeline project with Moscow during high-level talks at NATO headquarters in Brussels, where the 30 member states are meeting for two days of discussions.

President Joe Biden “believes the pipeline is a bad idea. Bad for Europe, bad for the United States,” Blinken said during brief opening remarks in Brussels. “Ultimately, it’s in contradiction to the European Union’s own energy security goals. It has the potential to undermine the interests of Ukraine, Poland, a number of other close partners or allies.”

Opposition to the nearly complete Nord Stream 2 project, a pipeline that runs 760 miles from Russia to Germany under the Baltic Sea, puts the Biden administration in line with the Trump administration’s previous position.

But the dispute with Germany also complicates Biden’s push to establish a more unified front among NATO allies. Blinken said if the project comes to fruition, Washington would be required by U.S. law to impose sanctions on companies involved in the energy venture, which would likely affect numerous German businesses.

Still, allies in Brussels this week are talking up how the arrival of Biden bodes well for NATO, which former President Donald Trump often complained was more beneficial to Europe than to the United States.

“There is no way to hide over the last few years we have had difficult discussions in our alliance,” NATO Secretary-General Jens Stoltenberg said Tuesday.

With Biden in the White House, “we have now a unique opportunity to start a new chapter in the trans-Atlantic relationship,” Stoltenberg said. “And I strongly welcome the Biden administration’s message on rebuilding alliances and strengthening NATO.”

In Brussels this week, allies are expected to develop plans to adapt NATO over the next decade, with a focus on dealing with a rising China and an assertive Russia. The aim is to ready the new strategy for heads of state to approve during a summit later this year.

NATO also is working on plans to better factor the effects of climate change into allied military planning, Stoltenberg said.

Allies on Tuesday and Wednesday were expected to endorse a report that would have members look for ways to reduce emissions during military operations, while also assessing the effects of climate change on military infrastructure.

The mission in Afghanistan and the feasibility of pulling allied forces out of that country by May 1 was also on the agenda. No final decisions on the way forward were expected to materialize during the conference in Brussels.

“Last week, President Biden noted that it would be tough to meet the May 1 deadline for a full withdrawal, but whatever the United States ends up doing will be informed by the thinking of our NATO allies, which I’ll take back with me after these conversations and consultations,” Blinken said.