US, Polish air forces train in Poland as Russia masses troops in nearby Ukraine 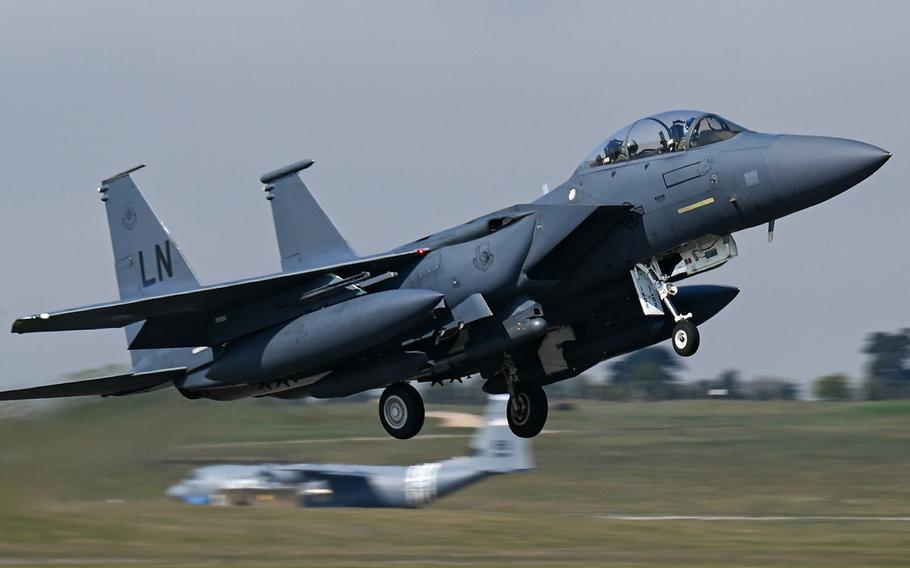 An F-15E Strike Eagle assigned to the 492nd Fighter Squadron takes off from RAF Lakenheath, England, April 19, 2021, for Poland, where U.S. airmen and aircraft are taking part in an agile combat employment exercise with the Polish air force. (Jacob Wood/U.S. Air Force)

RAF LAKENHEATH, England — U.S. airmen and aircraft from three bases in Europe have arrived in Poland for an agile combat employment exercise aimed at honing their ability to rapidly deploy during a crisis.

“Our goal is to always be ready with combat credible airpower for potential short or no-notice contingencies from locations with varying levels of capacity and support,” said Lt. Col. Daniel Etue, ACE development team lead for the 48th Fighter Wing.

Although it is taking place as Russia has massed at least 100,000 troops on the border with Poland’s neighbor, Ukraine, the Pentagon has said the exercise was “fairly routine" and “not a specific reaction to what’s going on" in the region.

“We do this all the time,” Pentagon spokesman John Kirby told reporters Monday. “As you know, we have had a rotational presence in Poland, which we greatly appreciate and welcome, and this is all part of that rotational element of training and readiness on the European continent.”

The F-15Es and F-16s will operate out of Lask Air Base, near Lodz, and Krzesiny Air Base, just south of Poznan, the city that houses the forward-based headquarters of the U.S. Army’s reactivated V Corps.

The Polish air force flies its own F-16s and and Russian MiG-29s out of the two bases.

The C-130s will operate out of Chievres Air Base in Belgium, U.S. Air Forces in Europe and Air Forces Africa said in a statement.

“Exercises and deployments that utilize agile combat employment concepts ensure forces in Europe are ready to protect and defend partners, allies and U.S. interests at a moment’s notice," said Col. Jason Camilletti, commander of the 48th Fighter Wing, based at Lakenheath.

ACE, which was regularly used during the Cold War, trains the Air Force to rapidly deploy small units to foreign airfields on a tight timeline during a crisis. The method has been reintroduced as the Pentagon shifts its emphasis toward great power competition with China and Russia. alvarez.kyle@stripes.com Twitter: @kal2931zeitvogel.karin@stripes.com Twitter: @StripesZeit