US, NATO focus east, but for how long? 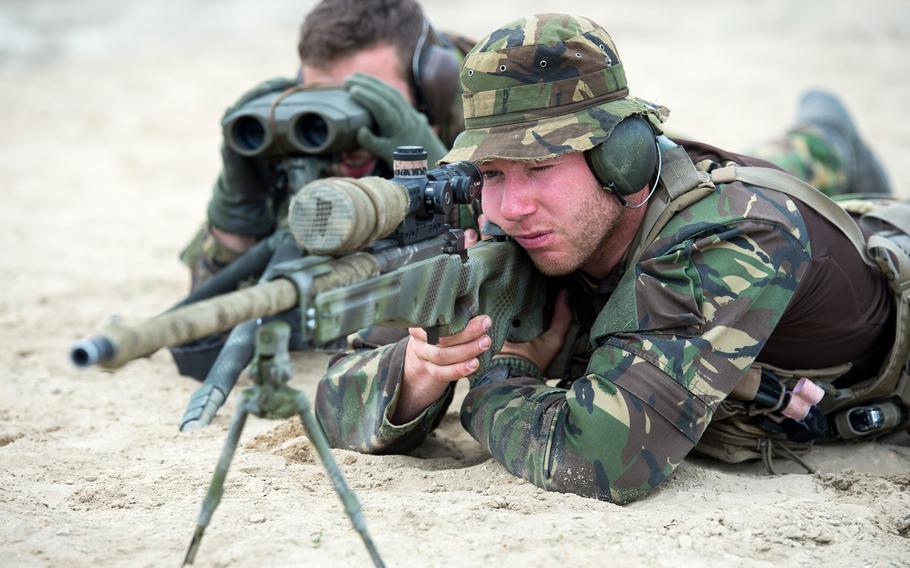 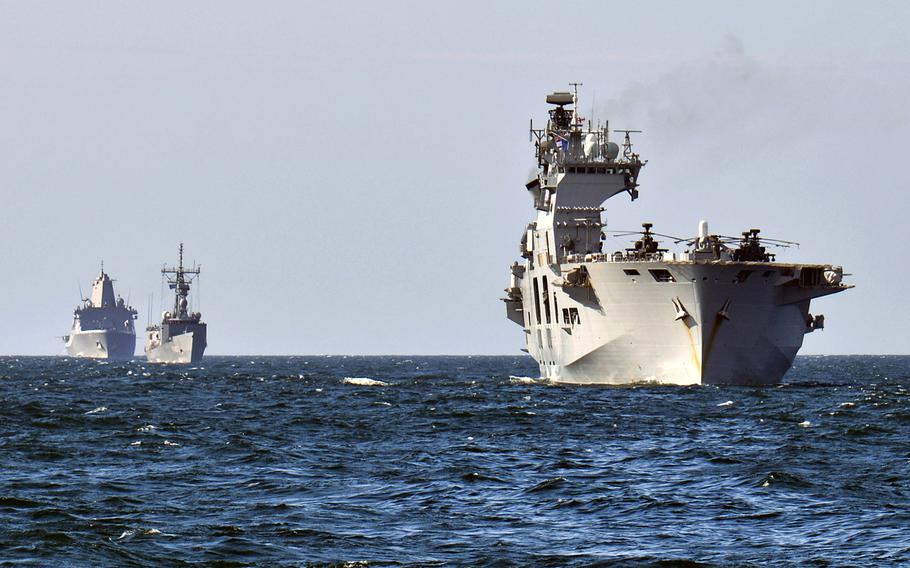 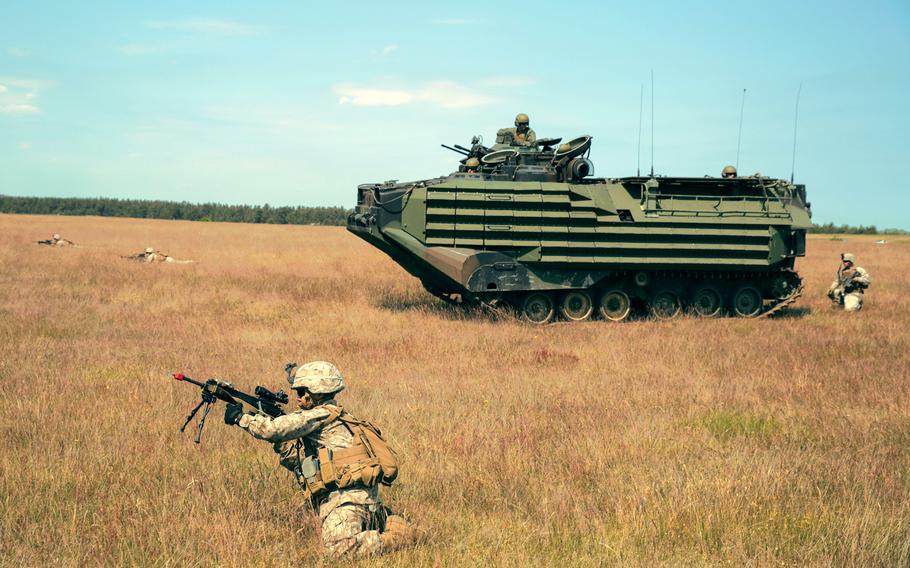 A Marine with Charlie Company, 1st Battalion, 6th Marine Regiment, advances during an amphibious assault rehearsal in Sweden in preparation for BALTOPS 2015, June 13, 2015. NATO defense ministers meet in Brussels on Wednesday to discuss challenges facing the alliance, including how to shore up commitments to exercises aimed at deterring Russian aggression. U.S. Marine Corps (U.S. Marine Corps)

U.S. plans to station tanks and other heavy weaponry in eastern Europe would be a clear show of increased U.S. and NATO presence in a region hungry for a tangible NATO footprint. But as the alliance looks to intensify its efforts in the east, it faces the dual challenge of averting a Cold War-style standoff with Russia and sustaining an operational tempo unmatched in recent years.

For NATO, the challenge ahead will be one of endurance as it works to transform itself in the aftermath of Russia’s intervention in Ukraine last year. There are already some indications of fatigue as the alliance presses ahead with a mission that is testing budgets, political will and alliance nerve.

“All of this is very expensive and it is running up hard against the limits of member states,” said Jan Techau, director of Carnegie Europe in Brussels, the European arm of the Carnegie Endowment for International Peace. “It’s a question of staying power and how much political capital can be spent on this. This now is the big, big task.”

When NATO defense ministers gather in Brussels on Wednesday for two days of talks on security challenges facing the alliance, one area of likely focus will be shoring up commitments to an enhanced exercise program in the east that now is the centerpiece of a strategy to deter Russian aggression on NATO turf.

During closed-door talks, Defense Secretary Ash Carter is expected to brief allies on the possible positioning by the U.S. of heavy weaponry in the Baltics, and elsewhere in eastern Europe, a symbolic gesture to threatened allies that experts say would do little to alter the balance of military power near Russia’s border.

Still, the move would streamline U.S. logistics at a time of budget constraints.

The past year has been one of rejuvenation for NATO, jolted into action by Russia’s annexation of Ukraine’s Crimea Peninsula. The alliance’s operations this month showcase its more expansive role.

Nearly 15,000 alliance troops are currently mobilized for large-scale war games and exercises across Europe, making June one of the busiest months for NATO in the past year.

NATO warships, fighter jets and quick-reaction forces are all on the move in a series of exercises dubbed Allied Shield designed to bolster combined capabilities and reassure allies rattled by what NATO’s top military commander, Gen. Philip Breedlove, has called a “revanchist Russia.”

Among the exercises is the first mass mobilization of NATO’s spearhead force, which is taking part in a battlefield test in Poland called Noble Jump.

The exercise is “designed to test NATO’s high readiness troops under battlefield conditions and to ensure that our concepts and procedures will work in the event of a real crisis,” Breedlove said in a statement. “I hope that day never comes, but our job is to always be prepared to defend the people, territory and values of this alliance.”

An intensified U.S. effort involves more warships, fighter jets and the rotation of a U.S. heavy brigade through much of eastern Europe as well as Marines and a U.S. Army Europe training effort inside Ukraine. The pace has been heavy.

Breedlove told reporters in Poland, where Noble Jump was underway, that NATO’s initiatives, particularly the spearhead force, were designed with long-term sustainability in mind.

Asked whether NATO could keep up its pace of operations, Breedlove said, “The short answer: yes.”

“This force has to be real. It has to be credible,” he said.

John Deni, an expert on European military matters at the U.S. Army War College, said there has been a security “sea change” on the Continent, but he expressed a note of caution.

“I do have concerns about the sustainability of the readiness plan,” Deni said. “When these countries feel budget pressure, readiness is the easiest thing to cut.”

“But we’ve seen a change in the threat environment, and that results in changes both politically and military for the alliance,” he said. “As long as [Russian President Vladimir] Putin represents a threat, I think the allies are going to maintain what they are doing.”

As they increase their presence of troops and materiel in the east, the U.S. and NATO will have to strike a tricky balance between sending a message of deterrence to Moscow and avoiding a Cold War-style standoff or something more dangerous.

The placement of potentially a brigade’s worth of heavy weaponry in the east would set a new precedent in a sensitive part of Europe, and talk of it has set off alarms in Moscow.

Russian officials have warned any such move would be a provocation that would demand countermeasures such as a troop build-up along its border with NATO and the placement of more missiles in the region. Putin said last week that Moscow intends to deploy 40 new intercontinental ballistic missiles this year, prompting NATO Secretary-General Jens Stoltenberg to accuse Putin of “nuclear saber-rattling.”

From a U.S. perspective, the positioning of a select number of tanks and other heavy vehicles in the region is more about symbolism and logistics, Deni said.

“We’re really not talking about that much stuff, and there are no permanent troops associated with this equipment,” he said.

Positioning more gear in the east will enable U.S. troops to move in and out of there more quickly — and cheaply. With fewer troops forward-based in Europe, the need for such equipment will grow as the U.S. relies more on rotating forces from the United States.

“My view is, it is an important, but limited reassurance step,” Deni said. “But honestly, the more important practical implication of this is that it makes it a lot easier to maintain a logistical presence for exercises.”

NATO also has in the works a series of staging facilities that are expected to serve as lily pad outposts for rotating forces and possible locales for equipment.

“These kinds of forward-deployed depots are a crucial element in NATO’s readiness action plan,” Techau said. “If you really want a high level of readiness on the eastern flank without permanent troops, you at least need to have a certain amount of equipment at the ready. Moving people is easy.”While Baltic states have asked for permanent NATO troops in the region, that is not likely ever to get alliance backing, Techau said.

“That’s not going to fly and we all know this,” he said. “This readiness plan is a very difficult balance you must find, that is robust enough to send a signal to Russia but not so robust” it turns into a dangerous escalation.