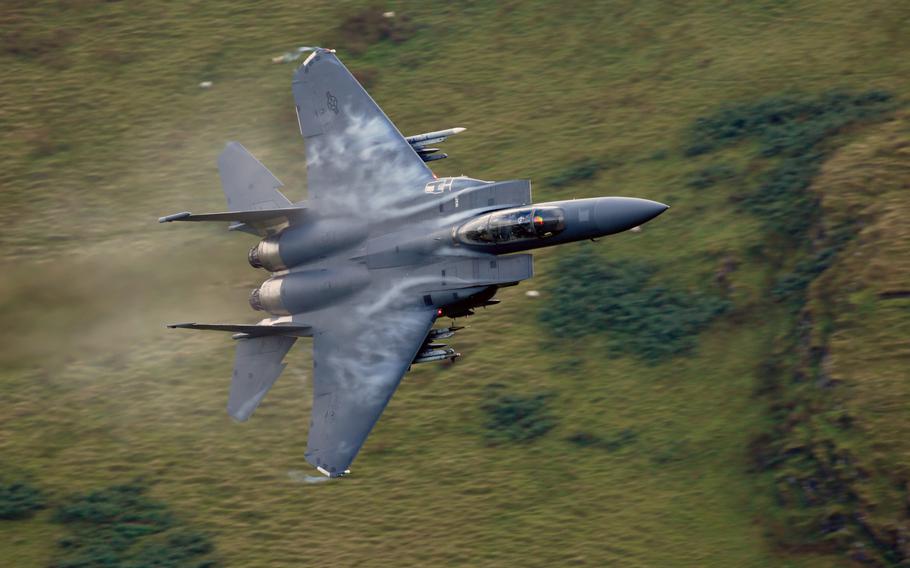 LAKENHEATH, England – A routine training flight was anything but when two U.S. fighter jets came close to colliding with a pair of parachutists over southern England earlier this year, a report by a British air safety board says.

One of the skydivers, outfitted with a helmet-mounted camera, filmed two F-15s passing under them above Cambridgeshire, said a report released in July by UK Airprox.

The two F-15s, from RAF Lakenheath, were on a routine flight when the near-miss occurred in April, 48th Fighter Wing spokeswoman Sybil Taunton said.

They had just been handed off by air traffic controllers at RAF Coningsby to those at RAF Lakenheath when the incident happened, said the report.

The pilot of the lead F-15 told Airprox he had changed course after the handover to avoid a KC-135 refueling tanker that “was on a collision course with the formation,” and inadvertently ended up over Chatteris airfield, which is popular with skydivers.

The pilot said he “was not aware that Chatteris were active and this was not mentioned by air traffic control,” the report said.

The parachutists were falling at 120 mph, they told Airprox. The two F-15s were traveling at nearly three times that speed – 345 mph – and the pilots said they did not see the skydivers, the report said.

RAF Lakenheath is “using this incident to reinforce the vital importance of situational awareness and attention to detail for all of our air traffic controllers and aircrew,” said Col. Will Marshall, 48th Fighter Wing commander.

“U.K. airspace is incredibly complex and often congested, and the safety of our aircrew as well as those we share the skies with is our number one priority,” he said.