US bases reviewing restrictions as barbershops, playgrounds and more prepare to reopen in Germany 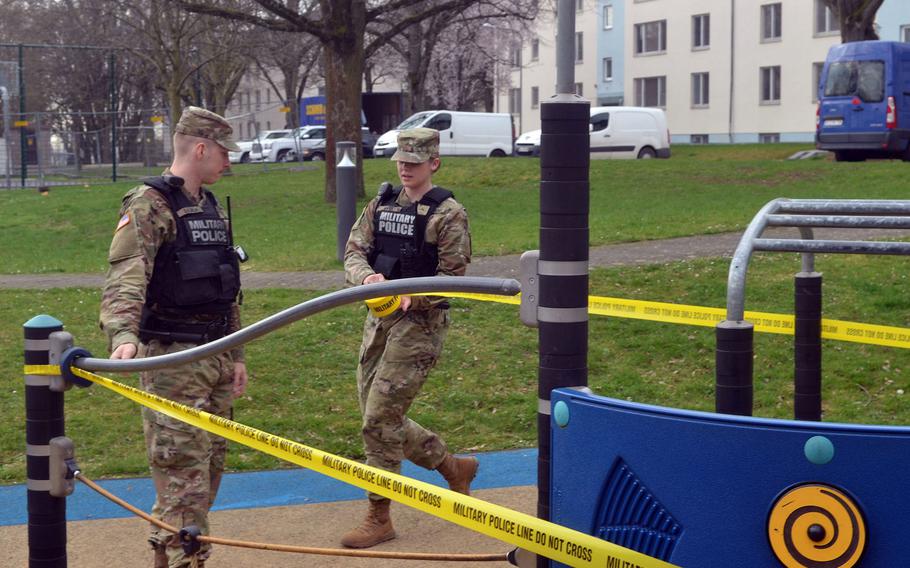 The military police close the playgrounds at Wiesbaden's Crestview and Aukamm housing area because of coronavirus concerns. U.S. bases in Germany on Friday said they were still determining whether to open playgrounds and other venues. (David Edge/Stars and Stripes)

KAISERSLAUTERN, Germany — Some base barbershops are reopening and venues such as playgrounds, museums, zoos and houses of worship in Germany are allowed to do so if they follow safety rules, as a result of eased coronavirus restrictions after weeks of lockdown.

Social distancing rules are still in place for now, as are bans on large public events, German Chancellor Angela Merkel said Thursday after a meeting with leaders from Germany’s 16 federal states.

She urged Germans to remain disciplined as they return to normal life and warned that if new infections spiked, the federal and state governments must be prepared to react.

“Caution remains the order of the day,” Merkel said.

U.S. military bases across Germany were still reviewing what services and facilities to resume and reopen, following Germany’s lead.

Rules for lifting restrictions are expected to vary by state and locality.

Hairdressers nationwide are allowed to open again Monday, and some U.S. bases in Germany plan to open their barbershops and beauty salons again after weeks of closure, though with strict measures in place.

At Ramstein Air Base and Kapaun, the barbershops will see customers by appointment only, with military personnel given priority for bookings, base officials said. Employees must wash customers’ hair, raising prices to 17.25 euros, or $19. Customers and stylists are required to wear face masks, and customers will be spaced to sit in every other barber chair to maintain social distancing rules.

In Rheinland-Pfalz, the state that includes Ramstein and about 50,000 Defense Department personnel and their families, houses of worship would be allowed to open Sunday, Minister President Malu Dreyer said. Playgrounds would also generally open Sunday if local communities agree, she said, while museums would reopen by May 11.

U.S. Army Garrison Stuttgart officials said they were discussing with U.S. Army Europe what services can be reopened. Army officials in Wiesbaden, home to USAREUR, declined comment Friday morning and said any announcements would be discussed at an online Facebook meeting that evening.

In Bavaria, where German health officials said 1,850 people as of Friday had died from coronavirus-related illnesses, more than any other German state, Minister President Markus Soeder said further discussions were necessary before restrictions were eased.

The Army garrison in Bavaria has generally matched the state’s regulations, but did loosen one restriction: people living on post are now allowed to travel off base in limited circumstances, if a single-use pass is approved by an O-5 equivalent supervisor or higher. The garrison, home to about 40,800 U.S. personnel, restricted on-base residents to post in March.

Vehicles leaving post will be randomly screened to enforce the new rule and to check that safety procedures are being followed, officials said.

Germany in recent weeks began easing restrictions after seeing the infection rate drop. It rose for a few days afterward but has since dropped again. Small stores, such as bicycle shops and booksellers, were allowed to open beginning April 20 and German schools will reopen on a limited basis starting Monday, with emphasis on graduating classes and the oldest primary school children.

Germany’s social distancing rules will remain in place until at least May 10. Those include a ban on gatherings of more than two people in public who are not part of the same household, and keeping at least 1.5 meters, or about 5 feet, apart from others in public places.

The goal is to slow down the spread of the virus, “since there are neither medications nor a vaccine,” Merkel said.

Whether and when to begin reopening hotels, restaurants and other tourist services is expected to be discussed when Merkel meets again with the heads of the states in the coming weeks.

The hospitality industry has struggled during the pandemic, with restaurants closed for all but limited delivery and takeout since late March.

Mario Ludwig, the owner of Der Fleischerimbiss, a sausage snack bar about a 15-minute drive north of Kaiserslautern, said customer numbers have fallen off by 50% despite maintaining takeout services.

“I built this place up and now I don’t know if it can go on,” Ludwig said. “It’s a really hard time.”