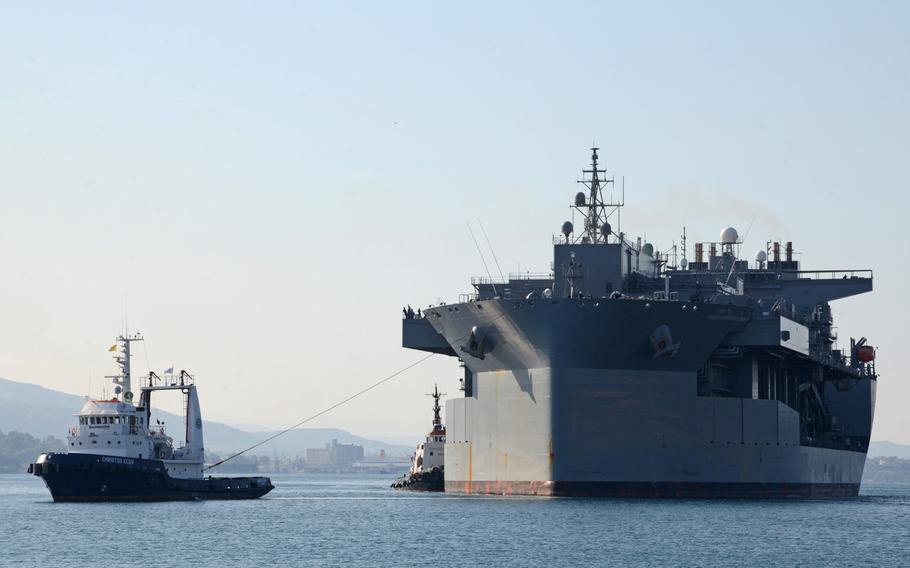 The Expeditionary Sea Base USS Hershel ''Woody'' Williams arrives at Souda Bay, Greece, for a port call Nov. 16, 2020. The U.S. and Greece will likely update a bilateral security pact this summer in a deal that could allow for more U.S. military activity in the region, Greek Defense Minister Nikos Panagiotopoulos said this week. ( Kelly M. Agee/U.S. Navy)

STUTTGART, Germany — The U.S. and Greece will likely update a bilateral security pact this summer in a move that could pave the way for more American military missions in the region, Greece’s defense chief has said.

Greek Defense Minister Nikos Panagiotopoulos, describing military ties with the U.S. as being at an “all-time high,” said that the Mutual Defense Cooperation Agreement between the countries is being amended.

The deal could “bring in more locations” where U.S. troops can operate in Greece, Panagiotopoulos said Tuesday during an online discussion at the Center for Strategic and International Studies. The plan also could “enhance what is happening at the selected locations in operation right now,” he said.

The agreement could be finalized within two months.

Panagiotopoulos’ comments are the latest signal that Washington is looking to bolster its position in the eastern Mediterranean, where Russia has stepped up military activities and where China is gaining influence as a financial stakeholder at various European ports.

Beijing is “very methodically, very patiently, very systematically — like everything China does — expanding its strategic posture in the region,” Panagiotopoulos said.

During the past three years, the U.S. has gradually boosted operations in Greece at multiple bases.

Most recently, the U.S. Navy in October muscled up in the eastern Mediterranean when it decided to homeport the USS Hershel “Woody” Williams at its Souda Bay base in Crete, a first for a U.S. ship in at least 40 years.

Since 1969, Souda Bay has mainly served as a logistics hub, serving ships transiting the region, including aircraft carriers.

Beyond Souda Bay, the U.S. operates MQ-9 Reaper drones in Larissa and at facilities in Alexandroupoli, where a port plays a key role for rotating U.S. forces in Europe.

The U.S. activity in Greece comes at a time of strained relations with ally Turkey, which also has been at odds with Athens in connection with an energy rights dispute in the eastern Mediterranean.

Some security analysts have suggested that if relations further deteriorate between Ankara and Washington, bases in Greece could eventually be an operational alternative to Turkey’s Incirlik Air Base.

Washington, however, has given no indication that it intends to move forces out of Turkey, where the U.S. Army also operates a missile defense radar at a remote base in Kuerecik.