US Air Force bombers deploy to Norway for first time 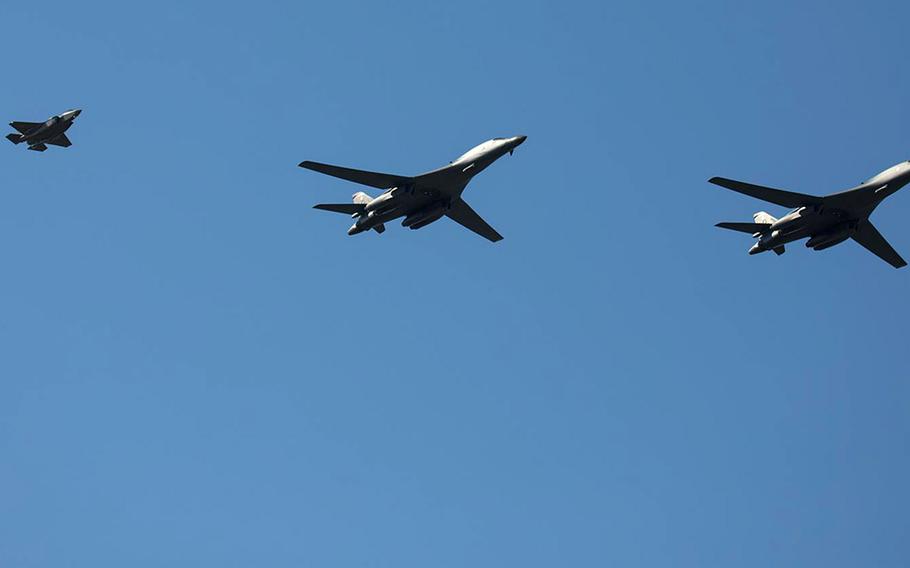 A pair of B-1B Lancers fly with Norwegian F-35s during a training mission for Bomber Task Force Europe, May 20, 2020. Some 200 Air Force personnel are deploying to Orland Air Base, Norway, with a B-1 bomber squadron to support bomber missions from the base, marking the first bomber deployment to Norway. (Norwegian air force)

The Air Force is deploying bombers and airmen to a base in Norway for the first time, underscoring the growing importance of the Arctic region to U.S. defense strategy.

More than 200 Air Force personnel from Dyess Air Force Base, Texas, were expected to arrive at Orland Air Base with an expeditionary B-1 Lancer bomber squadron to support missions in the region, U.S. European Command said in a statement Tuesday.

EUCOM did not say when the airmen and B-1s would arrive or how long they would remain at Orland, a base on the country’s west coast where the Royal Norwegian Air Force operates a fleet of F-35A Lightning II fighter aircraft.

The airmen “will be a part of the advance team for scheduled missions in the coming weeks which will occur for a limited time,” the statement said.

The Air Force in July unveiled a new Arctic defense strategy focused on bolstering its presence in the area and countering threats from Russia and China.

While at Orland, the airmen will conduct operations in the High North and work with allies and partners across the European theater.

“Operational readiness and our ability to support Allies and partners and respond with speed is critical to combined success,” Gen. Jeff Harrigian, U.S. Air Forces in Europe and Africa commander, said in a statement. “We value the enduring partnership we have with Norway and look forward to future opportunities to bolster our collective defense.”

The Air Force has been stepping up its strategic bomber missions in the Arctic, but recent missions have either been staged from England, where bombers typically deploy while training in Europe, or have involved roundtrip flights between the U.S. and the Nordic region.

This is the first time bombers are deploying to Norway, a USAFE-AFAFRICA spokeswoman said Tuesday.

During the height of the Cold War, strategic bombers often crisscrossed the region. Although bombers such as the B-52 and F-111 were based nearby in Britain, they weren’t allowed to use Norwegian air bases, even for exercises, because the government in Oslo banned nuclear-capable allied aircraft from using its territory.

The long-range B-1 was nuclear capable until the mid-1990s, when it was revamped for exclusively conventional missions.

Nicknamed “The Bone,” the Lancer has served the U.S. Air Force since 1985.