Ukraine industry seeks ties with West, but buckles in crisis 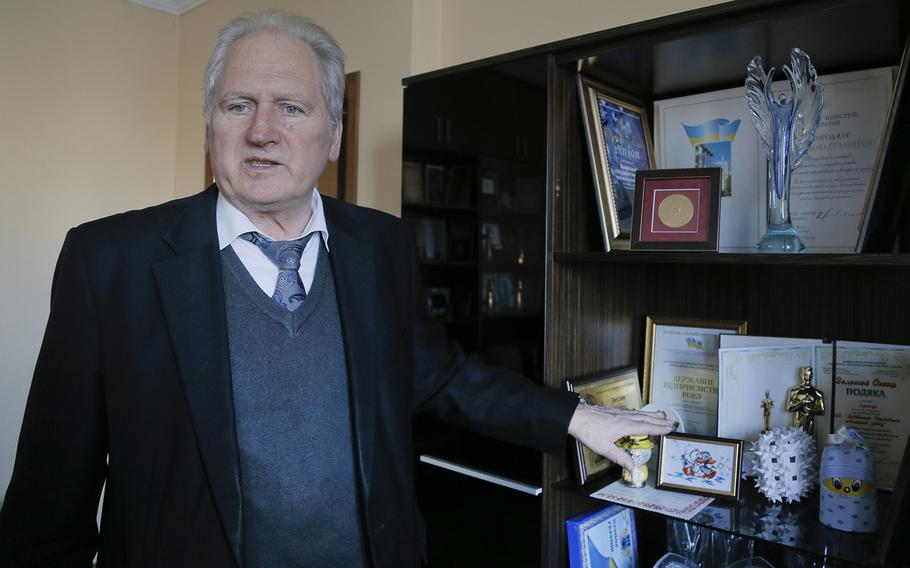 In this photo taken in Feb. 17, 2015, Volodymyr Kuzovkin, director of the jewelry factory talks with a reporter in his office in Lviv, Western Ukraine. Despite Ukraine's desperation to integrate with Europe, a desire so strong it sparked the protests that ousted pro-Russian President Viktor Yanukovych last year, much of Ukrainian business remains wedded to Soviet-era practices even as it is buffeted by a very modern economic crisis. Ukraine is hoping to improve links between its heavy industry and European markets to help the economy recover. But for companies like Kuzovkin's Lviv State Jewelry Factory in western Ukraine, the challenges are huge. (Efrem Lukatsky/AP)

KIEV, Ukraine — Volodymyr Kuzovkin's office is less than 50 miles from the European Union, but for him and his factory, the EU is a world away.

Despite Ukraine's desperation to integrate with Europe, a desire so strong it sparked the protests that ousted pro-Russian President Viktor Yanukovych last year, much of Ukrainian business remains wedded to Soviet-era practices even as it is buffeted by a very modern economic crisis.

Ukraine is hoping to improve links between its heavy industry and European markets to help the economy recover. But for companies like Kuzovkin's Lviv State Jewelry Factory in western Ukraine, the challenges are huge.

Trade with EU countries is not picking up. Business with oil-rich ex-Soviet states in Central Asia has tapered off because of uncertainty over the war in eastern Ukraine. And the local economy is in shambles — skilled workers are going to the front, inflation is soaring and loans are so hard to come by that some companies are considering bartering goods.

"People are spending on subsistence," says Kuzovkin, a grizzled 74-year-old former miner who was put in charge of the Lviv factory in 1985 by the Soviet government.

The national currency, the hryvnia, has lost almost three quarters of its value against the dollar in 12 months. The effects of that are particularly acute for manufacturers like the Lviv jewelry plant, which must buy gold and silver at ever-higher prices.

The factory has slashed production by half in the last year because it cannot afford the precious metals, Kuzovkin said. The price at which the factory buys gold has tripled in 12 months, he adds, with similar rises for silver and diamonds.

In a room used for producing thin silver chain, only one machine of six is operating. Kuzovkin said the factory would need "dozens more people" to work at full capacity. He had plans to expand production before violence flared in the east, but those have been shelved due to the war.

With much of Ukraine's heavy industry based in the east of the country now either under rebel control, the historically poorer west and center of the country must now shoulder more of the burden of helping Ukraine out of economic crisis.

The machine-building plant called Bolshevik, located in the west of the capital Kiev, has been a major employer since Tsarist times and its website proudly displays honors awarded to it by the Soviet government, but now it too is struggling to adapt.

The company focuses on exports to the U.S. and Europe and imports little, which would typically allow it to prosper from the weak Ukrainian currency, but acting Chief Executive Roman Biloskorskiy says he had been forced to cut production.

"We only have sales contracts in foreign currency now," he said. He noted that with the plunging value of the hryvnya, "we should be doing more export sales, but the items that we buy have also risen in price, so it has ended up more or less balancing out."

The factory went through tough times last year under previous management, with workers going unpaid, Biloskorskiy said, but wage arrears have now been cleared and salaries will rise soon as ordinary Ukrainians face a rising cost of living.

Vladimir Bratusin, sales director of KRMZ, a Soviet-era metalworking plant on the outskirts of Kiev, says the unavailability of dollars raised the specter of a return to bartering, last widely seen in Ukraine during the post-Soviet economic turbulence of the 1990s.

However, he said that while he was open to barter offers, trading the factory's output of items such as drill bits for supplies, the situation was not yet serious enough to force a full-scale switch to swap deals.

"We tried barter in the 1990s and it had a very bad influence on the economy," Bratusin said. "It depends who is offering you barter. If it's a good client who has something with value on the market, then it's O.K., but if not, we're not interested."

Meanwhile, the longer the fighting in eastern Ukraine goes on, the more it drains the pool of skilled workers. The Ukrainian government has reintroduced conscription, calling up thousands of men and causing more to leave the country for fear of being forced to fight.

At the Lviv jewelry factory, whose total workforce of 370 is mostly composed of women and older men, Kuzovkin says two employees have already gone to the front, with 25 more awaiting the results of medical examinations to judge whether they are fit to fight.