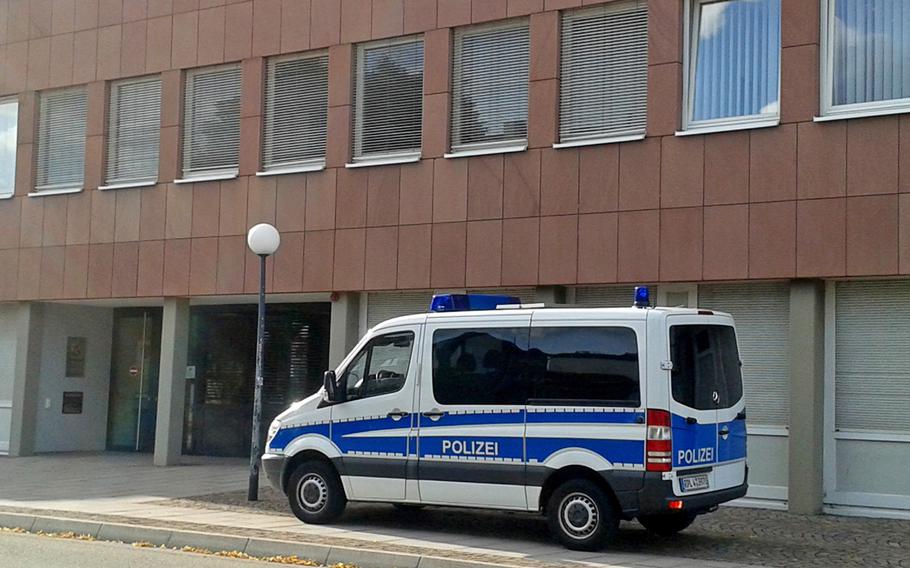 Buy Photo
The trial continued Tuesday, Aug. 27, 2019, at the courthouse in Zweibruecken, Germany, of two of three men charged in connection with the violent invasion of an American family's home in Landstuhl in February. (Marcus Kloeckner/Stars and Stripes)

ZWEIBRUECKEN, Germany — Two of the men accused in the violent invasion of an American family’s home in Landstuhl pleaded guilty Tuesday to attempted burglary in a break-in during which another intruder was fatally stabbed by a resident.

The two were part of a group of four that showed up at a home in Landstuhl on a Sunday evening in February, intending to break in and steal high-value objects that they were told by a moving company employee were in the residence, according to court testimony Tuesday.

Under German law, their guilty pleas mean the American couple whose home was invaded and many other witnesses were no longer required to testify, the judge said. But a moving company employee will be summoned to give evidence next week when the trial resumes, she said.

The suspects face up to 15 years in prison if convicted of attempted burglary and one additional year for failing to help the suspect who died after being stabbed by the American father.

While both defendants on Tuesday admitted they had gone to the Americans’ home to burglarize it, one of them contested the charge that he had failed to help the suspect who died — one of three brothers involved in the home invasion.

Both of the accused said in statements read out by their lawyers that the dead suspect had masterminded the attempted burglary.

They also said they were surprised when the American father opened the door after they rang the bell.

“It’s true that I, with my brothers and (the fourth man), went to the house to take things,” suspect J.M., who under German law can only be referred to by his initials, said in a statement read out by lawyer Phillip Goetze. “But in my mind, no one was going to be home.”

“We stood, still as stones, in front of the door when the American opened it,” said the other suspect, J.R., in his statement.

But the brother who later died immediately forced his way into the house as the other three scuffled with the American father, who eventually pushed them out of the residence and slammed the door, J.M. said.

The father, a former Air Force major who had moved to Germany to work as a Defense Department civilian employee, then grabbed a kitchen knife and ran upstairs where the lone suspect who’d entered the house was attacking the mother, according to previous testimony. Three children were also at home.

The American stabbed the suspect as he chased him out of the house.

“(He) came back out, very badly injured,” J.M. told the court. The brothers and J.R. bundled the wounded man into a van and drove to a village about 10 miles away, where J.M. said he rang the doorbell of another home, this time to ask for help.

That home, too, was the residence of a former U.S. servicemember and his German wife, who were expecting their daughter and grandchild to stop by, they testified separately on Tuesday.

When the wife opened the door, “there was a tall man standing there, and he said, ‘Please call an ambulance. My brother’s badly hurt,’” she recalled.

Her husband, a retired military policeman, ran to where H.M. was lying on the sidewalk and began performing CPR, the couple testified.

They were unaware of the violent home invasion that had happened a few miles away, the husband told the court.

The retired MP said the suspect was already dead when he arrived, adding that he had two stab wounds below the left shoulder blade and one in the lower back.

J.M. “was the only one who tried to help” the dying man, he said. The other two “got in the van and drove off” when the American and J.M. approached them, he said.

The trial is set to resume Tuesday morning. That afternoon, the trial of the other surviving brother, referred to as A.M., will begin.

The American burglary victims may be required to testify if A.M. does not also admit guilt, Goetze, who is representing both brothers, told Stars and Stripes.

“We also have the matter of the stab wounds to the back of H.M. to resolve,” Goetze said.

The prosecutor’s office in May ruled that the American father had acted in self-defense and cleared him in the death of the home invader, but the two surviving brothers have appealed that decision.

If their appeal is allowed, the American couple would have to appear in court again, Goetze said.