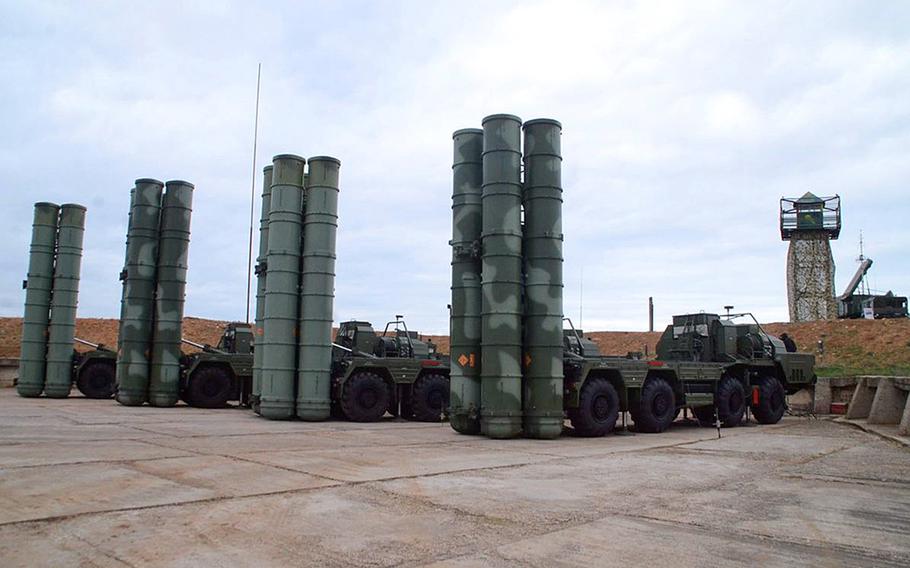 Russian S-400 surface-to-air missile launchers in Sevastopol in 2018. Two U.S. senators are demanding sanctions be imposed on Turkey after reports said Turkey has activated its S-400 system and used it to track a Greek F-16 in August. (Russian Defense Ministry)

The senators also questioned whether Turkey had integrated NATO’s tactical data link into the S-400, which could allow Russia to gather information on alliance members.

The letter was prompted by an unconfirmed report in Greek media, saying Turkey had activated the S-400 system to track a Greek F-16 as it returned from an exercise in August.

Despite Turkey buying the S-400 in 2017, Washington so far has held off from penalizing Ankara under the Countering America’s Adversaries Through Sanctions Act, which says any nation that makes a major defense purchase from Russia should be sanctioned.

That, and the “slow pace at which the Department of Defense is moving to remove Turkey from the F-35 supply chain” after it took delivery last year of a first batch of S-400s, have emboldened Turkish President Recep Tayyib Erdogan, the senators’ letter said.

Reports that Turkey has now activated the system and used it “to detect U.S.-made F-16 fighter jets returning from the Eunomia exercise conducted by France, Italy, Greece and Cyprus in late August … make clear that Turkey has no intention of reversing course and divesting of this system,” it said.

When the U.S. first raised the prospect of sanctioning Turkey over its purchase of the S-400, Erdogan threatened to kick the U.S. out of Incirlik Air Base and to close down a U.S. Army site in the small Turkish village of Kurecik, which houses a key radar for NATO missile defense efforts in Europe.

NATO members, and alliance leader Jens Stoltenberg, who visited Turkey this week, have continued to urge Ankara to reconsider the purchase, saying the S-400 is incompatible with other alliance air defense networks and expressing concerns that Russia could use the system to gather intelligence on NATO member states.