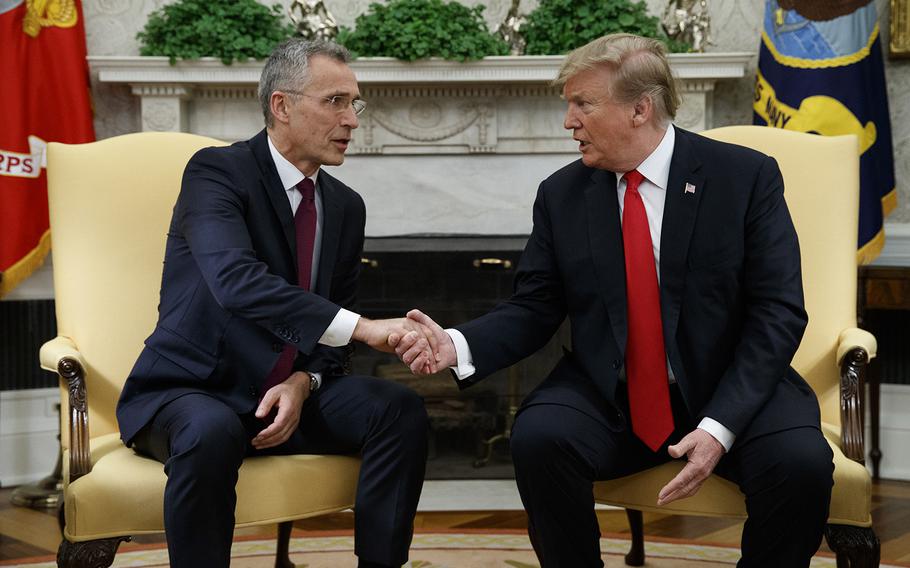 President Donald Trump shakes hands with with NATO Secretary General Jens Stoltenberg during a meeting in the Oval Office of the White House, Tuesday, April 2, 2019, in Washington. (Evan Vucci/AP)

President Donald Trump took credit Tuesday for an increase in defense spending among NATO members, suggesting that an alliance he has harshly criticized has turned a corner. But Germany did not escape criticism.

“People are paying and I am very happy with the fact they are paying,” Trump said during a meeting with NATO’s top official at the White House.

Trump lauded the alliance overall for increases in defense expenditures, but Germany continues to be a flashpoint for the president. “Germany, honestly, is not paying their fair share,” he said.

NATO members are expected to dedicate 2 percent of economic output to defense, but Germany falls short and doesn’t have a clear plan to reach the alliance benchmark. “They are paying close to 1 percent,” Trump said of the Germans. “It is very unfair.”

Trump also blasted Germany over a trade imbalance with the U.S., which has long been a point of contention for the president, who has threatened tariffs on the German automotive industry over the issue.

“We are protecting Europe, at the same time they have taken advantage of us on trade,” Trump said. “But it is all changing.”

Defense spending has been a focus for Trump when it comes to NATO, an alliance formed during the early days of the Cold War and still a linchpin of American national security strategy. But while Trump has questioned the overall value of NATO, calling it “obsolete,” he said Tuesday that NATO is now “much stronger.”

NATO Secretary-General Jens Stoltenberg has credited Trump with making spending a priority even as some members have bristled at Trump’s tough talk.

Currently, most of NATO’s 29 members have crafted plans for getting to the 2 percent mark by 2024 — an alliance deadline. Trump said Tuesday that “at some point it will have to go higher than that,” but there has been no indication of any support among allies to go beyond the 2 percent level.

Still, Trump praised Stoltenberg for pressuring allies to increase spending. “We have worked together on getting some of our allies to pay their fair share,” Trump said. “It’s called burden sharing.”

Since 2016, European allies and Canada have added $41 billion to their defense budgets, according to NATO. By the end of next year, that number is expected to rise to $100 billion. “That helps. And it proves also that NATO is a strong alliance,” Stoltenberg said.

On Wednesday, Stoltenberg is slated to address the House of Representatives about NATO and its role in transatlantic security.