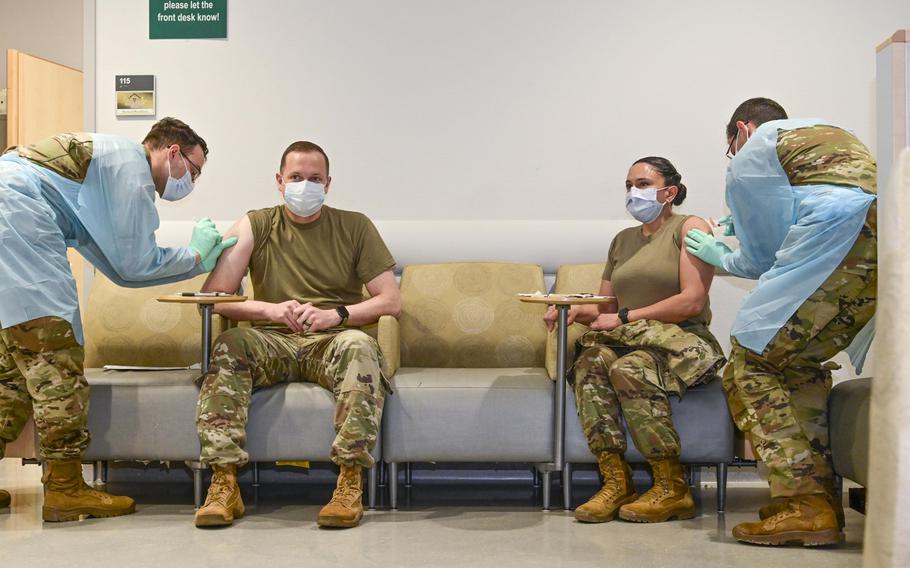 U.S. Army Health Clinic Stuttgart began inoculating health care workers and first responders with the Moderna COVID-19 vaccine at Patch Barracks, Stuttgart, Germany, on Dec. 31, 2020 (shown here). Teachers in the area may have to return to the classroom starting the week of Feb. 1, 2021, without a vaccination as special operations troops in the area are ahead of them in line for the shot. (Becca Castellano/U.S. Army)

STUTTGART, Germany — Defense Department teachers in Stuttgart may have to return to the classroom without being inoculated against the coronavirus, as military units in the area, including Navy SEALs and Green Berets, have higher priority to receive limited supplies of the vaccine.

The Department of Defense Education Activity is considering whether to restart in-class learning as early as next week, as are German officials in the state of Baden-Wuerttemberg, where Stuttgart is located.

Stuttgart is home to thousands of troops, including U.S. European and Africa Commands, and an array of special operations units.

The Stuttgart military community has “had to take a different approach to the way they are distributing the vaccine based on the fact that they have so many people in the top tier (military units),” said Gino Mattorano, spokesman for Regional Health Command Europe.

At some locations in Europe, including Ramstein Air Base and others in the Kaiserslautern area, most teachers have already had their first inoculations.

Front-line health care workers and first responders received the Moderna vaccine in the first phase of the military’s inoculation campaign, which was completed early this month.

Commands have moved on to vaccinating highly deployable forces and high-priority units. Essential support staff, such as teachers, get the shot after that.

The principals at Stuttgart’s five schools sent a joint letter to staff Monday, warning that not enough of the vaccine was available to inoculate everyone immediately.

“Teachers in the Stuttgart complex have been prioritized according to age and medical conditions so that these individuals receive the vaccination first,” the letter said.

The lack of vaccine availability drew criticism from some teachers this week.

“There seems to be misappropriation of DoD vaccine resources if those of us about to be put in the greatest danger … remain unvaccinated,” said one Stuttgart teacher, who requested anonymity because of fear of reprisals. “The message being sent to school staff here in Stuttgart is not that we are essential, but that we are expendable.”

School staff will be notified by the medical clinic as more doses become available, the letter said.

The vaccine is given in two doses, spaced four weeks apart. The first dose provides around 80% protection against the virus, and that jumps to nearly 96% protection after the second dose, according to documents Moderna submitted to the U.S. Food and Drug Administration.

While U.S. military health officials in Europe declined to provide exact numbers of vaccines that have been received or administered, Mattorano said the pace of the inoculation campaign is starting to quicken.

DODEA is expected to decide this week if in-class learning will resume Monday. The resumption date could get pushed back to bring military schools in line with host nation coronavirus restrictions, under which most German schools aren’t slated to reopen until Feb. 15.

Schools in Germany have been closed since early December because of high infection rates across the country, but the number of new cases has been on the decline over the last couple of weeks. Some states, including Baden-Wuerttemberg, are mulling reopening elementary schools and kindergartens as soon as Monday.