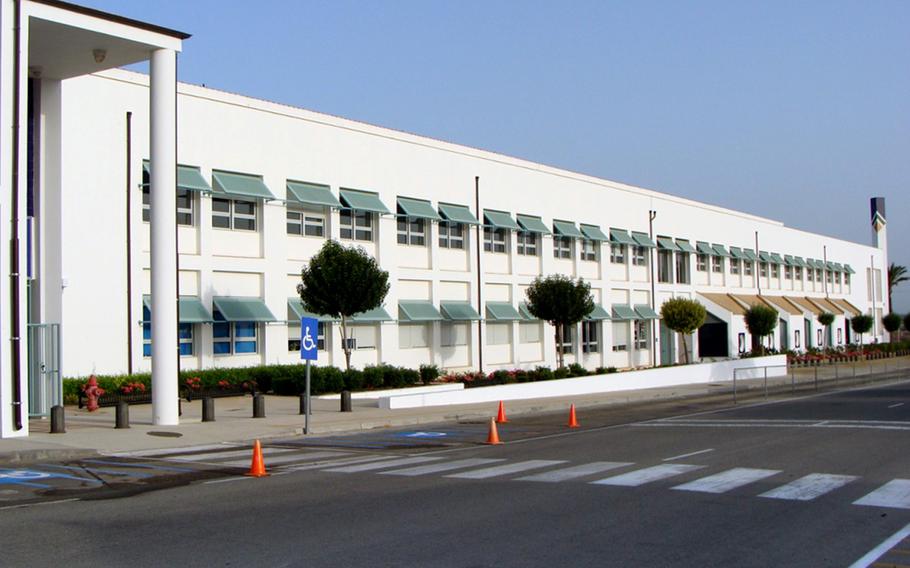 Students who vandalized the elementary school at Naval Station Rota, Spain, shown, and the middle/high schools will not be expelled, education and base officials say. (Department of Defense Education Activity)

Students who spray-painted Defense Department school buildings at Naval Air Station Rota with antisemitic, homophobic and racist messages earlier this year have been adequately punished and can remain in school, officials said.

The four students, who scrawled swastikas, offensive messages and images of genitalia on the walls of the elementary and the middle/high schools, were suspended after the incident in late February, said Department of Defense Education Activity Europe spokesman Stephen Smith. They also faced other disciplinary actions, he said.

One student has since moved and the others are back in school, he said.

DODEA officials and base investigators held disciplinary hearings and determined that “appropriate administrative actions have been taken,” Navy Lt. Lyndsi Gutierrez, a Rota spokeswoman, said in a statement.

DODEA considers long-term suspension or expulsion “extreme” consequences and says they should be used only when other disciplinary actions have failed or when a student poses a danger, according to a DODEA regulation Smith cited that addressed the students’ conduct.

A community member who felt the actions taken against the students were not strong enough contacted Stars and Stripes several weeks after the event to describe the graffiti.

Removing the offensive messages and symbols from the school walls cost more than $1,100, Smith said. It was unclear if the students had to contribute to the cleanup costs.

The vandalism occurred the same weekend as three other Rota students “communicated what are considered bullying statements on Instagram,” targeting other students, Smith said.

The messages were shared among students “outside of the instructional day and subsequently shared with school and law enforcement officials by concerned parents,” he said.

Those students were disciplined as well, Smith said. They are also still in school.

The “unfortunate events” in February were the springboard for a series of discussions on diversity, equity and inclusion, involving parents, students and teachers at Rota held last month, he said.

Patrols of the school campus were stepped up immediately after the incidents, DODEA superintendent for the Europe South District Michelle Howard-Brahaney said in a letter, shared with Stars and Stripes, that was sent to parents and staff shortly after they happened.

“Our priority is a safe and tolerant environment for students and staff,” she said in the letter, expressing her disappointment in the students’ conduct. “This type of behavior is unacceptable and will not be tolerated.”