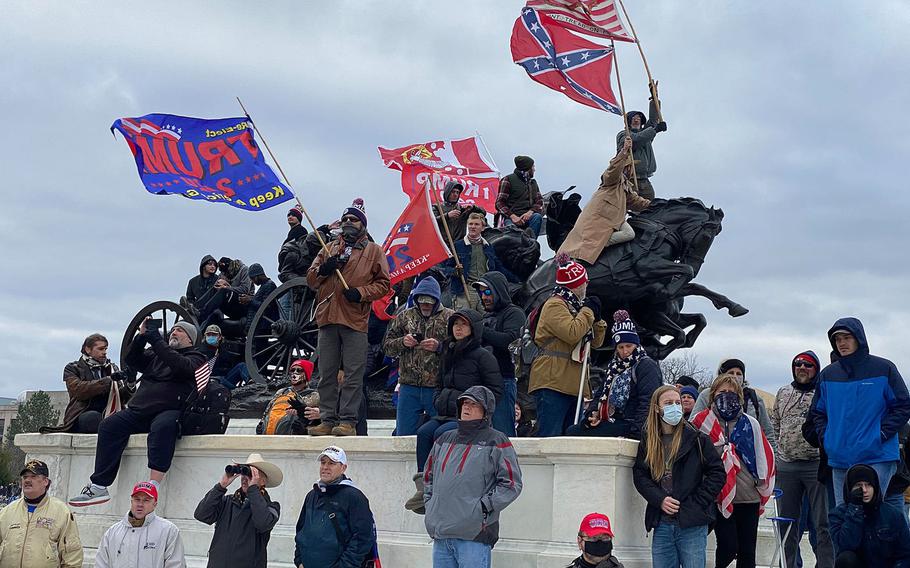 Buy Photo
Trump supporters, including one waving a Confederate flag, watch rioters storm the Capitol in Washington, D.C., on Jan. 6, 2021. NATO Secretary-General Jens Stoltenberg condemned the unrest and called for the results of the November election in the U.S. to be respected. (Robert Reid/Stars and Stripes)

STUTTGART, Germany — NATO’s top official has condemned the scenes of mob violence at the U.S. Capitol on Wednesday with the kind of rebuke normally reserved for adversaries and failed states.

“Shocking scenes in Washington, D.C.,” Secretary-General Jens Stoltenberg said on Twitter as hundreds of rioters, egged on by an incendiary speech by President Donald Trump, stormed the Capitol, where lawmakers were validating President-elect Joe Biden's win in the November presidential vote.

“The outcome of this democratic election must be respected,” Stoltenberg said.

The brief comment on Twitter was out-of-character for the NATO leader, who has made a point of not weighing in on the domestic politics of alliance members during his six-year tenure.

“There can be no minimization or hiding of the disgraceful acts we watched unfold,” she said in a note to allies, posted on Twitter.

German defense minister Annegret Kramp-Karrenbauer said in an interview with Welt-TV that the unrest was the result of the “intellectual and political arson” that Trump had stoked during his presidency.

She praised American lawmakers for reconvening hours after the assault on the Capitol, and working through the night to confirm Biden’s election victory. They showed “that they won’t allow themselves to be brought down, and that’s a good sign for the future,” she said.

Former U.S. Defense Secretary James Mattis said the violence was “an effort to subjugate American democracy by mob rule” and blamed Trump for fomenting it.

“Our Constitution and our Republic will overcome this stain and We the People will come together again in our never-ending effort to form a more perfect Union, while Mr. Trump will deservedly be left a man without a country,” he said in a statement. .

Berlin’s ambassador to the United Kingdom, Andreas Michaelis, urged democracies around the world to heed the lessons the U.S. taught Germany in the aftermath of World War II.

“After our catastrophic failure in the 20th Century, we Germans were taught by the US to develop strong democratic institutions,” he wrote on Twitter. “We also learnt that democracy is not just about institutions. It is about political culture, too. All democratic nations need to constantly defend it.”

And James Stavridis, former supreme allied commander of NATO, said the upheaval in Washington played into the hands of enemies of the West.

“Our adversaries will be dumbfounded with their good fortune seeing this insurrection — Russia and China will be actively thinking how can they extend it,” he said.

Stoltenberg has faced questions for years about whether Trump was undermining alliance unity with his frequent criticism of NATO. As president, Trump badgered NATO members to spend more on their defense, complaining that the U.S. carries too much of the alliance's financial burden, and periodically threatened to quit the alliance, founded in the aftermath of World War II as a bulwark against the Soviet Union, if his demands weren't met.

But Stoltenberg has always demurred, and even credited Trump with putting defense spending at the top of NATO’s agenda.

Privately, however, diplomats from member states have expressed disdain for the U.S. president who was seen as undermining the military pact because of his alleged personal dislikes of some European politicians.

NATO defense ministers will hold their first meeting under the incoming Biden administration in February.