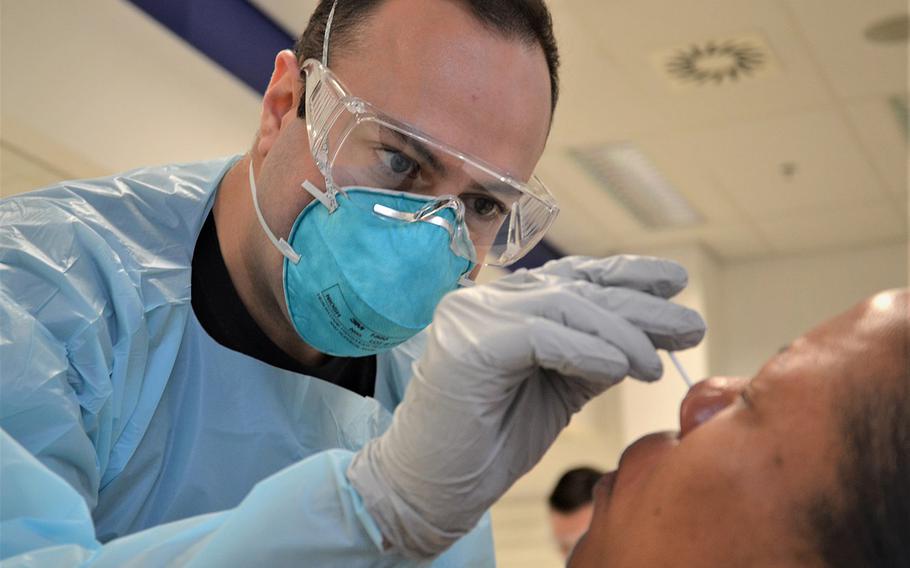 A person is tested for the coronavirus in 2020. The Army garrison in Stuttgart was once a coronavirus hot spot, but military officials say an aggressive mitigation effort has driven numbers down, comparing favorably with the outlying city. (Facebook/U.S. Army Garrison Stuttgart)

STUTTGART, Germany — A Pentagon policy that restricts what commands can share about coronavirus infection figures in their communities is causing confusion in Europe, where some military officials have tried to better inform troops about the prevalence of the virus within garrison walls.

Differing interpretations of the policy, developed in March during the earlier days of the pandemic, have led to vastly different levels of transparency at U.S. base communities worldwide.

The Army’s post in Stuttgart was once a coronavirus hot spot, registering more cases than any other overseas installation before the garrison stopped reporting totals last year. But military officials now say an aggressive testing and social distancing effort has kept numbers down.

As of Thursday, the garrison’s seven-day average incidence rate per 100,000 people stood at 53.5, which was far better than the regional average of 78.9 in the same period, Stuttgart garrison commander Col. Jason Condrey said during an online town hall meeting.

For the Stuttgart military community, it was a sign that efforts to contain the virus were paying off.

Yet the information sharing was at apparent odds with how U.S. European Command interprets the policy introduced by former Defense Secretary Mark Esper, which prohibited bases from providing case totals at the local level as an operational security measure.

“That guidance was also reiterated in EUCOM and Army Public Affairs Guidance,” Mattorano said in a statement.

However, garrison officials in Stuttgart say they regard the information provided by Condrey as compliant with Pentagon guidelines.

“We provide frequent and open feedback to the community on the effectiveness of our COVID mitigation measures,” garrison spokesman Larry Reilly said in a statement. “Our approach allows us to inform community members of COVID rates on the installation as well as in the local community, while safeguarding information related to the readiness of our forces in a manner consistent with DOD policy.”

Stuttgart has a track record of sharing more information with community members than some other commands in Europe, as well as installations in the U.S., which tend to keep their data under wraps.

USFK commander Gen. Robert Abrams and garrison commanders emphasized early on in the pandemic that transparency was an important part of their public health mission.

Navy bases in Japan post to social media the number of active cases and recoveries, along with how the circumstances of the cases were identified, which include contact tracing, medical exams, and tests from new U.S. arrivals.

The posts regularly draw dozens of comments, questions and thanks from community members. Some military officials in Europe have said they would like to share more information because it would highlight their relatively successful efforts — but say they are constrained by the Pentagon.

The Defense Department hasn’t clearly explained why the rules are applied differently around the world.

A Pentagon spokesman in June said the Pacific region has three major joint commands “that do their own reporting.”

“Because they’re joint, it is very difficult for the services to break down and report like the rest of the (combatant commands),” Pentagon spokesman Lt. Col. Chris Mitchell said at the time.

USFK and U.S. Forces Japan also must report their numbers to the host nations, he said. It went unaddressed that EUCOM also is a joint headquarters and that military communities in Europe are required to supply their data to host nation government authorities. Some local governments make that military data public.

In the case of Stuttgart, Condrey’s frequent town hall meetings have informed a community of about 25,000 for about a year.

Condrey delivered blunt messages about the need to follow social distancing rules and other prevention measures after cases at the garrison, which unlike most in Germany is situated in a large city, rose higher than any other installation in Europe in March.

Reported cases at the garrison soon fell dramatically. On June 4, Stuttgart became the first garrison in Germany to ease its health threat level to condition Bravo, signaling a moderate risk of transmission.

Since that time, the garrison has consistently had lower infection rates than regional German averages, Condrey said during Thursday’s town hall meeting.

Those results have made Stuttgart “the envy of those around us,” Condrey said.