Russia says it sent coronavirus medical aid to US after Putin, Trump chat 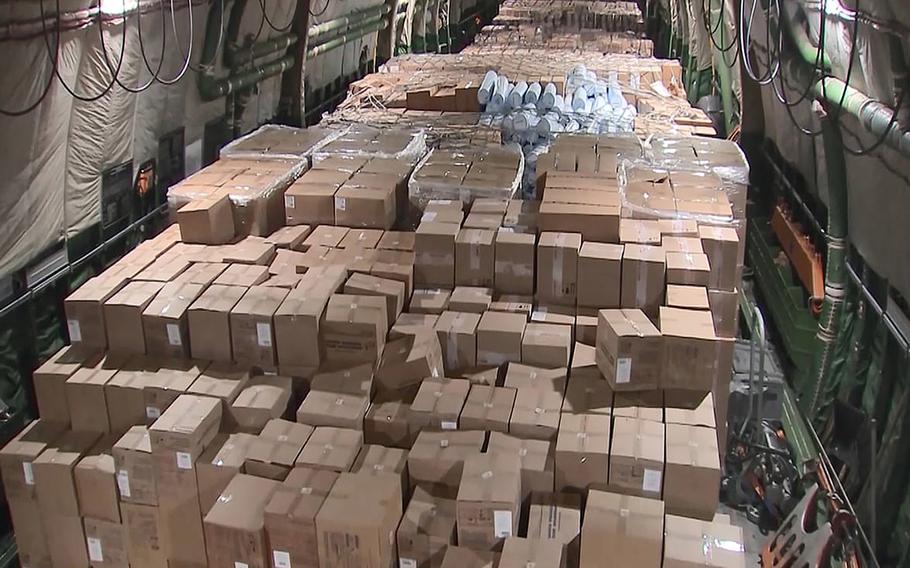 Boxes with medical masks and equipment onboard a Russian plane at Chkalovsky Airport, near Moscow, in an undated photo. Russia says it has sent coronavirus medical supplies to the United States. (Russian Defense Ministry/Tass)

Boxes with medical masks and equipment onboard a Russian plane at Chkalovsky Airport, near Moscow, in an undated photo. Russia says it has sent coronavirus medical supplies to the United States. (Russian Defense Ministry/Tass) A Russian Antonov An-124 Ruslan plane is on the runway at Marine Corps Air Station Futenma on Okinawa, Japan in 2016. Russia says it has sent coronavirus relief supplies in the same type of aircraft to the United States. (Brooke Deiters/U.S. Marine Corps)

STUTTGART, Germany — A Russian aircraft stocked with medical supplies is flying to the U.S. after President Donald Trump accepted an offer of support, the Russian defense and foreign ministries said Wednesday.

“The Russian plane with medical masks and medical equipment on board has departed for the United States,” the defense ministry told Russia’s Tass news agency.

It wasn’t clear where the plane was headed in the U.S., but it was expected to arrive Wednesday. The Russian Foreign Ministry said the flight came after talks between Russian President Vladimir Putin and Trump earlier in the week.

The White House had not yet commented on the talks or the aid delivery early Wednesday.

A large Antonov An-124 Ruslan cargo plane was dispatched to “help fight #COVID19 pandemic, save lives of American citizens,” the foreign ministry said on Twitter.

Since the coronavirus outbreak, Russia has touted its aid efforts in countries hard hit by the virus, such as Italy, where Moscow recently sent medics and supplies.

The efforts have been met with appreciation by some but skepticism from some Russia hawks, who consider the moves part of a broader disinformation campaign to undermine the West and NATO.

Ben Hodges, the former commander of U.S. Army Europe, was leery when pictures of the aircraft filled with boxes began circulating on social media Wednesday.

“I’m skeptical of this report … no Loadmaster in the world would load like that,” Hodges said on Twitter, taking issue with how the cargo was piled into the Russian aircraft.

“But it’s a gift TO the Kremlin, not FROM it, if it is true,” Hodges said.

Like Russia, China — where the virus originated — also has sought out opportunities for public relations wins, even though it was slow to report the virus’ initial outbreak in Wuhan, analysts said.

“Beijing is aggressively engaged in a propaganda campaign to characterize its response to COVID-19 as decisive and representative of a superior system, while calling the response of Western democracies like the United States ‘sloppy,’” wrote John Lee, a senior fellow at the Hudson Institute think tank, in an analysis of Chinese information operations.

Sometimes, however, China’s efforts backfire. Last week, Spain was forced to reject 58,000 Chinese test kits because they were inaccurate at detecting the virus.