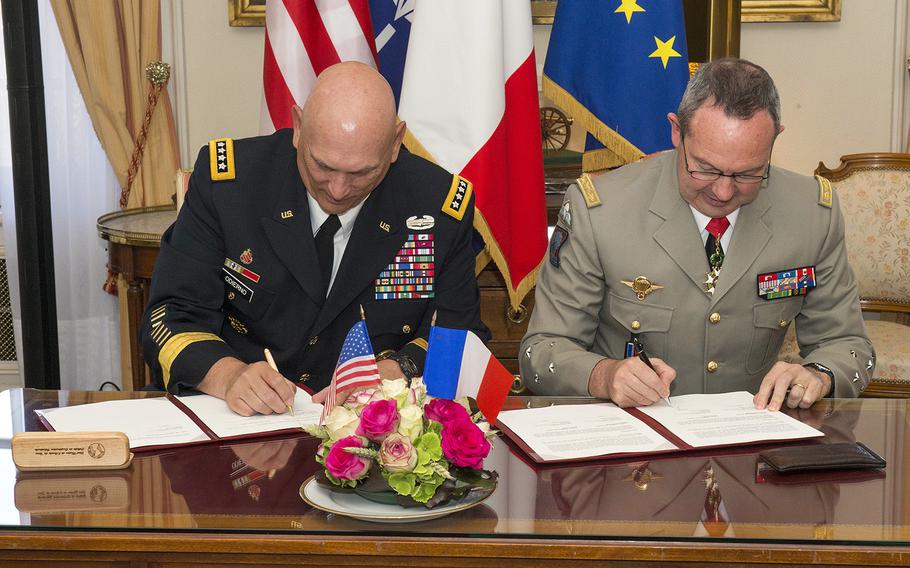 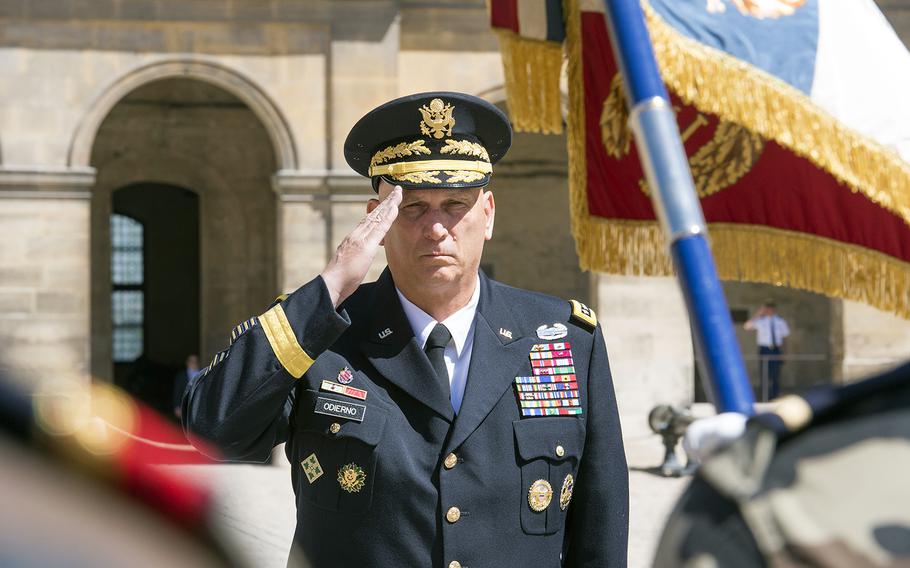 U.S. Army Chief of Staff, Gen. Ray Odierno, salutes during a ceremony at Hotel des Invalides, Paris, France, on July 10, 2015. Odierno was on a four-day tour of Europe where he visited Soldiers in training, U.S. Army Europe leadership, and dignitaries in four countries. (Chuck Burden/U.S. Army)

STUTTGART, Germany — The Army’s top general is drawing up plans to station up to a brigade’s worth of tanks and other heavy equipment in Germany as part of an expanding effort to beef up the military’s quick response capabilities in the region.

In addition, the Army also is planning to add more “regionally aligned” U.S-based forces to Europe, which means more soldiers could soon be rotating through the Continent as the military aims to increase its presence in places such as the Baltics and Poland, according to Army Chief of Staff Gen. Ray Odierno.

Odierno, in a Friday interview with the Wall Street Journal, said the additional tanks, Bradley Fighting Vehicles and other gear, would enable the Army to accelerate deployments to Europe in a crisis.

Odierno’s comments come only weeks after an announcement by the Pentagon that the Army will also preposition roughly 250 tanks and other armored vehicles at locations in the Baltics, Poland, Romania and Bulgaria. U.S. officials have emphasized that move is primarily aimed at facility ongoing U.S. Army Europe training efforts with allies in the region. However, the measures also are expected to improve the readiness of U.S. forces in Europe, a place where troops numbers have been on the steady decline for years.

To offset such loses, the Army has become increasingly reliant on rotationaltroops to help carry out its mission in Europe. A Georgia-based brigade now serves as the Army’s rotational force in Europe. Odierno told the Journal he also wants to designate the entire Colorado-based 4th Infantry Division as a regionally aligned force for Europe.

Such a designation would mean the division’s brigades, helicopters and various specialists would be a regular presence for security exercises in Europe, the Journal reported.

The plan, which will allow the division’s intelligence experts to focus on the threat from Russia, would be implemented over the next two years, according to the Journal.

The efforts, however, could be stymied if Congress doesn’t find a solution to mandated cuts in defense, which if not reversed will force the Army to dip below an end strength of 450,000 soldiers. Last week, the Army announced its plan for cutting some 40,000 troops to reach its targeted end stated.

If more cuts are required, the Army will be forces to curtail missions overseas, Odierno said.

Since Russia’s intervention in Ukraine last year, U.S. Army Europe soldiers have been a near-constant presence in the Baltics and Poland, carrying out a range of training efforts. Members of the Vicenza-Italy-based 173rd Airborne Brigade also are in the midst of training effort in western Ukraine that is focused on that country’s efforts to build up a national guard force.

With U.S. troops spread thin across NATO’s eastern flank with Russia, it raises the question of whether sufficient forces are in place should Moscow attempt to challenge a member state.

Moscow has stated it has no intentions of any intervention, but NATO allies in the Baltics and Poland have long been fearful of Russia’s large military presence across the border. Many security experts regard a direct Russian intervention into NATO turf as an extremely remote possibility. Still, Marine Gen. Joseph Dunford, the nominee to serve as the next chairman of the Joint Chiefs, stated during testimony Thursday that Russia is now America’s number one security threat.

Should there be a crisis between Russia and a NATO member, Odierno told the Journal that pre-positioned equipment and rotational forces must able to quickly reinforce U.S. troops operating on NATO’s eastern edge.

“We hope that the Russians wouldn’t (create a crisis), but we always must be prepared,” Odierno told the Journal. “We have to figure out how to reinforce those companies that are forward.”