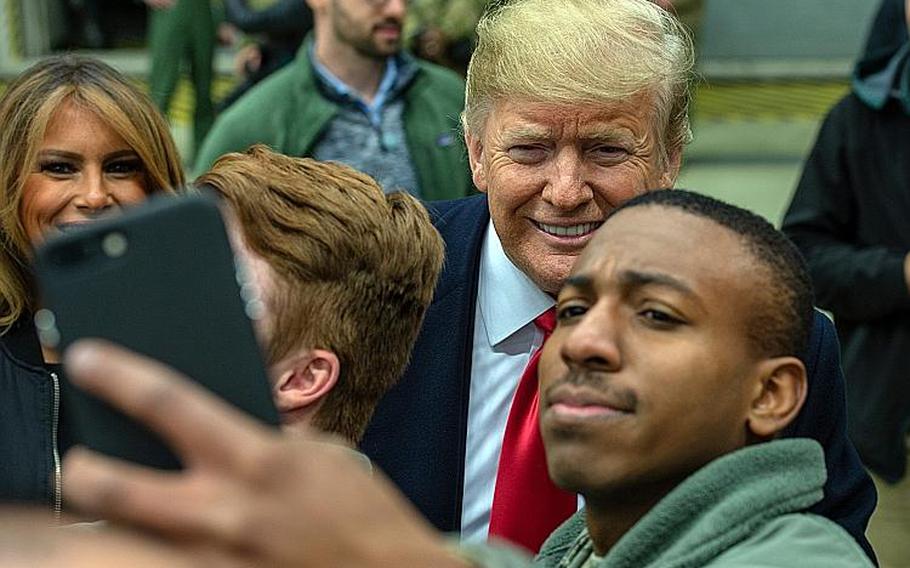 RAMSTEIN AIR BASE, Germany — It wasn’t a campaign rally, but airmen here weren’t shy about showing their support for President Donald Trump and his wife, Melania, during an impromptu visit early Thursday.

More than 200 airmen waited hours in an aircraft hangar to meet the president and first lady, who stopped at Ramstein after midnight on their way back from Iraq.

Airmen erupted into cheers when the Trumps walked into the hangar. They slowly made their way down a rope line, posing for photos, shaking hands and talking with airmen, most of whom were in uniform.

Trump signed reflective belts, Air Force covers, and even a wallet. A few airmen held up “Make America Great Again” caps for his signature, while one officer gave the president a coin in exchange for an autograph on a Trump flag.

While waiting to get a selfie with Trump, Airman 1st Class Anthony Joubran, 23, an aerial porter at Ramstein, said the president looked different in person.

Trump was at Al Asad Air Base in Iraq on Wednesday for an unannounced visit with U.S. troops, his first to an active combat zone since taking office in 2016.

The stop at Ramstein, where the president’s plane was refueled, was also a surprise, said a Ramstein base official. The base learned of the visit late Wednesday afternoon, the official said, and put out the word to base squadrons.

The president’s whirlwind trip overseas was made only days after he announced the U.S. would withdraw its troops from Syria and scale back its forces by about half in Afghanistan. It also comes amid a partial government shutdown, though it likely won’t affect airmen at Ramstein, since the Defense Department is expected to be funded during the shutdown.

Trump in brief remarks to airmen didn’t mention Syria, Afghanistan or the shutdown. He and the first lady thanked airmen for their service and sacrifice.

Trump took credit for giving the U.S. military “a little increase,” the first in 10 years, he said. The military, however, typically receives a pay raise every year.

He also mentioned China, hinting that “great deals” were coming, and noted the stock market rebounded some Wednesday.

Before greeting airmen, Trump met with Air Force leaders at Ramstein aboard Air Force One.

Those discussions were fruitful, the president said. Afterward, he said he was surprised to find so many airmen waiting for him in the hangar.

“There were supposed to be 40 or 50 people and we gave them the option and there turned out to be, I don’t know how many this is, but it’s a lot,” he said. A base fire department official estimated the crowd at more than 200.

“I’m just at a loss for words right now,” she said. “Truly amazing experience. I even took a selfie with Melania as she touched me on my arm. I told her it was an honor and it truly is.”