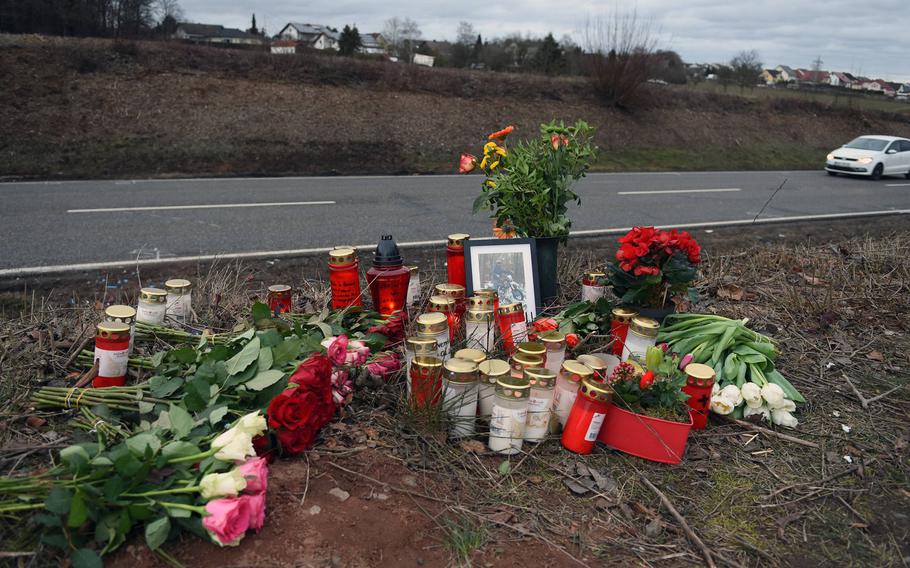 A roadside memorial of flowers and candles was created for a German teenager killed in a car crash near Weilerbach, Germany, in February 2019, involving a young airman assigned to Ramstein Air Base. The Air Force is planning to try the airman for his role in the death. (Jennifer H. Svan/Stars and Stripes)

RAMSTEIN AIR BASE, Germany — A young Ramstein airman faces negligent homicide and involuntary manslaughter charges for his role in a car crash that killed a German teen more than a year ago.

He also faces charges of reckless endangerment, reckless driving, and dereliction of duty for failing to obey the speed limit and not returning to his lane after passing a vehicle.

Roman Bahena was driving a Chevrolet Camaro on the evening of Feb. 6, 2019, when he crashed head-on into a Piaggio Ape, a three-wheeled light commercial vehicle with a Vespa scooter as a base.

The Piaggio driver, a 17-year-old German male from nearby Weilerbach, died at the scene along L367, a two-lane road a few minutes’ drive from Ramstein Air Base. The victim has not been identified publicly.

Roman Bahena, then 20, was newly assigned to Ramstein at the time of the crash.

Another preliminary hearing is set for April 30 and a court-martial is scheduled to start on May 4. German authorities ceded jurisdiction of the case a day after the crash.

Ramstein legal officials said they could not say what maximum punishment Roman Bahena faces due to the number of factors involved in the case.

Involuntary manslaughter carries a sentence of up to 10 years in prison, while the maximum sentence for negligent homicide under the Uniform Code of Military Justice is three years of confinement.

Roman Bahena did not say much during Friday’s hearing. The few in attendance included the victim’s parents.

The airman is not in pretrial confinement, officials said.

Roman Bahena’s Air Force defense team said at a preliminary hearing last year that their client had no alcohol or drugs in his system and there was no evidence that he or his wife, a passenger in the car, were texting around the time of the crash.