Buy Photo
Ukrainian soldiers go over basic weapons procedures with a soldier from the 173rd Airborne Brigade in April 2015, during training in Yavoriv, Ukraine. A rapid Russian military buildup along the Ukrainian border in recent weeks has sparked fears of an invasion. (Joshua L. DeMotts/Stars and Stripes)

Buy Photo
Ukrainian soldiers go over basic weapons procedures with a soldier from the 173rd Airborne Brigade in April 2015, during training in Yavoriv, Ukraine. A rapid Russian military buildup along the Ukrainian border in recent weeks has sparked fears of an invasion. (Joshua L. DeMotts/Stars and Stripes) 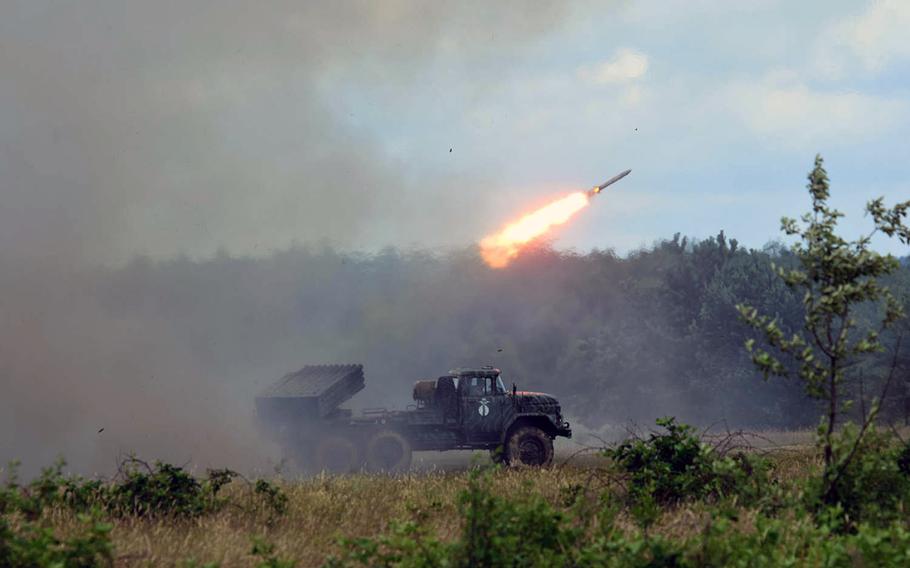 Buy Photo
A Ukrainian BM-21 Grad Multiple Rocket Launcher fires a rocket during a training exercise in Yavoriv, Ukraine, in June 2017. A rapid Russian military buildup along the Ukrainian border in recent weeks has sparked fears of an invasion. (Stars and Stripes) 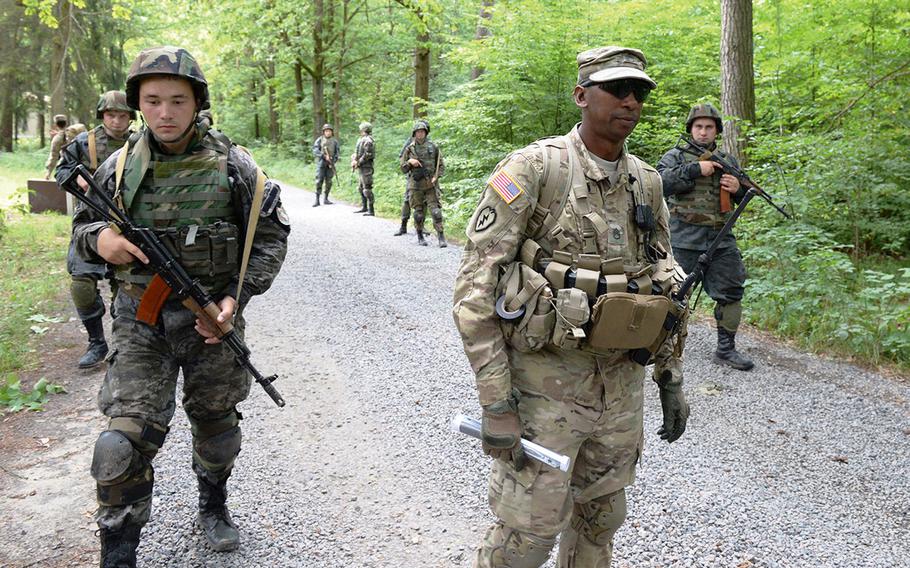 Ukrainian soldiers carry a recoilless rifle during a training exercise led by troops from the 2nd Infantry Brigade Combat Team, 3rd Infantry Division, in November 2016 at a range near Yavoriv, Ukraine. A rapid Russian military buildup along the Ukrainian border in recent weeks has sparked fears of an invasion. ( Elizabeth Tarr/U.S. Army)

STUTTGART, Germany — Russia’s rapid military buildup in recent weeks has sparked fears that a large-scale invasion of Ukraine looms, but confusion over Moscow’s aim has the U.S. and its European allies grasping for a coherent strategy to avert a potential crisis.

U.S. military officials and security analysts say that the Russian military force assembled is as large as the one put together in 2014, when Moscow annexed Ukraine’s Crimean Peninsula in a move that altered the security landscape in Europe.

Events in Ukraine have high stakes for the U.S. military. It was forced to recommit thousands of forces to the Continent over the past seven years due to concerns about a more assertive and expansionist Russia.

“What we don’t know right now is President Putin’s ultimate intention for this particular period of time,” said retired Lt. Gen. Ben Hodges, who was one of the chief architects of the military efforts to rebuild in Europe after 2014.

It’s unclear if Russian President Vladimir Putin is spoiling for a fight in Ukraine or bluffing to test the new Biden administration. Putin might also be trying to distract the Russian people from his political and economic problems, analysts say.

“The domestic situation in Russia is pretty grim,” Hodges said. “The classic Kremlin maneuver is to create distraction.”

Along the line of contact — a 250-mile stretch in the east where Ukrainian and Russian-backed forces have squared off for several years — skirmishing could be inevitable, said Michael Kofman, a Russia expert with the Arlington, Va.-based CNA think tank.

“But I find at least a major war improbable,” Kofman said during an online discussion Tuesday hosted by the Center for the National Interest in Washington.

Unlike Russia’s stealthier move in 2014, Moscow has deployed forces on Ukraine’s periphery in a high-profile way, with images of convoys circulating on social media. The troops have poured in from all over Russia and force estimates range between 25,000 and 40,000 extra troops near Ukraine’s borders.

“The military balance is decidedly not in Ukraine’s favor,” Kofman said.

Still, Ukraine’s military, which has received support from the U.S. and other NATO allies, has improved since 2014 and an invasion now would come with a higher cost for Russia.

“The costs (of invasion) outweigh the benefits,” said Melinda Haring, a Russia expert with the Washington-based Atlantic Council, who also spoke during the Tuesday seminar. “It’s not going to be a walk in the park like it was in Crimea.”

But if an invasion is unlikely, it’s still in the realm of the possible, experts say.

Inside Russia, there is a sense that Ukrainian President Volodymyr Zelenskyy has taken a hard line against Russian speakers in Ukraine. And in February, Zelenskyy banned three Russian-language television networks that he considered as propaganda outlets for Moscow, which created a backlash from the Kremlin and among the right wing in Russia.

“He (Putin) does have to worry about his political right ... he is not going to abandon Russian speakers in Ukraine,” said George Beebe, a Russia expert at the Center for the National Interest.

Beebe said the U.S. generally misreads the message Putin is trying to send in the current crisis.

Instead, the message Russia is now sending with its troop buildup is “don’t let your folks in Ukraine get reckless. Because there will be a disaster that will come here … Russia will go to war over this,” Beebe said.

Hodges says NATO needs to step up in the Black Sea region to counter Russia’s longer-term aim, which is to isolate Ukraine from the West.

“It demonstrates that we the West do not have a strategy for the greater Black Sea region,” said Hodges, who argues that Moscow’s moves in Crimea are part of a long-term plan to dominate the strategic waterway that gives Russia entrée to the Mediterranean.

A more formidable alliance presence in the region would send a signal to Russia and reassure Ukraine, he said.

Still, some analysts say the U.S. and NATO will never go to war over Ukraine, so military moves matter less than getting Europe to take a tougher stance on economic sanctions. Blacklisting Russian banks should Russia escalate in Ukraine would raise the costs of a fight, they say.

Hodges concurred that getting allies, especially Germany, on board with stronger sanctions, will be key going forward. If allies like Germany fail to respond in the event of another Russian incursion, Hodges said the damage to NATO’s reputation would be lasting and the Russians “will have accomplished their long-term aim.”

“It can’t be the U.S. alone. It has to be Germany and others that punish the Russians,” he said.