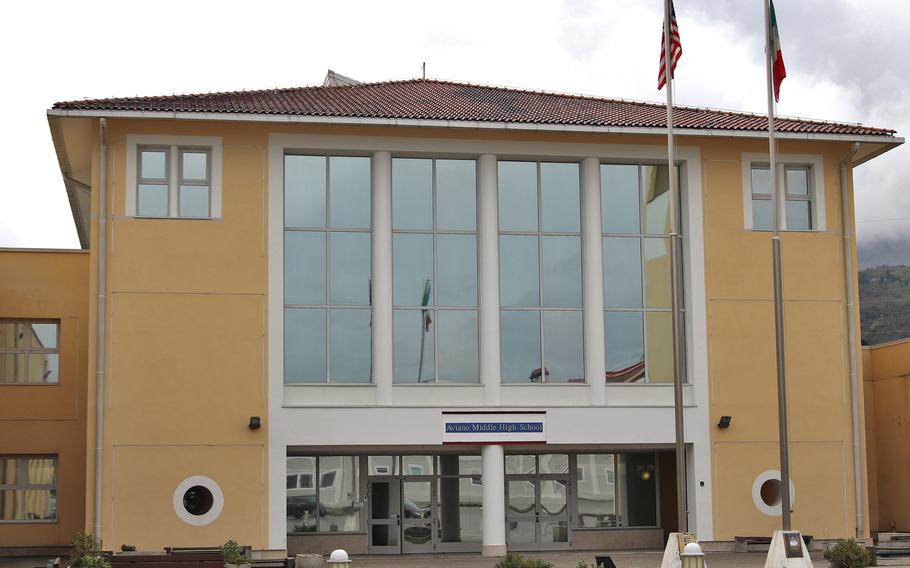 Aviano Middle High School, Italy, which has more than 430 students in grades 6-12, was shut down on Weds., Oct. 2, 2019 by the second power cut on the base in just over two weeks. (Norman Llamas/Stars and Stripes)

AVIANO AIR BASE, Italy — A second power outage in just over two weeks forced schools on Aviano Air Base to close and caused some medical services to be canceled for part of Wednesday.

Power was restored at about 10 a.m., nearly four hours after it went out, but all classes were cancelled at the base’s schools and children were sent home at 9 a.m.

At the 31st Medical Group clinic, sick call, dental and optometry services were unavailable and some other services were limited. Most, however, were available throughout the outage.

“Civil engineers were on hand when the outage happened and worked quickly to disseminate word of the outage,” said Maj. Sarah D. A. Babcock, spokeswoman for the base’s 31st Fighter Wing. “Backup generators were used at the medical clinic to keep things running until power was restored.”

The outage also closed all of the support squadron’s base services in the area, including the community center, bowling center, library, youth programs and education office. The base’s Community Bank was also closed. All services resumed later in the day.

An early morning Facebook post and a mass text message sent out just before 8 a.m. alerted parents that schools were closed.

Many students had already been picked up from home by buses and taken to school. Some parents said bus drivers were aware of the outage and had told them they would likely be bringing the children home again soon.

“Why wouldn’t you just delay school for a few hours in the hope that the issue is repaired?” wrote Stephanie Dominque, a parent of a student at Aviano Elementary school, in a comment on the base’s Facebook page. “If the problem isn’t fixed, then cancel school. It is absolutely unnecessary to have children (such as ours) be on the bus for upwards of three hours.”

Another concerned parent, who declined to be named, said her child never got off the bus from the time she was picked up from home at around 6:50 a.m. until she was brought back at about 10 a.m.

“Overall, I was just disappointed,” Dominque told Stars and Stripes. “Thankfully, we have a wonderful school community and we knew our children would be in good hands.”

Wednesday’s incident came just over two weeks after a 15-hour power outage on Aviano forced schools to close early and threatened to keep them shut the following day. The Sept. 17 outage was caused by a demolition crew cutting through a power line while working on an area of the base that was shuttered in 2016.

A temporary repair was made to the power line two weeks ago, but base officials said a permanent solution would require another outage, which would be scheduled in advance to avoid disruptions to the base community.

Both outages affected the area that houses all three base schools, the medical and dental clinics, and other personnel support activities. The flight line is in a different area of the base and was not affected.

Babcock could not immediately say what caused the latest power cut.

“We are working to find out what caused the outage this morning and share more information when we have it,” she said.