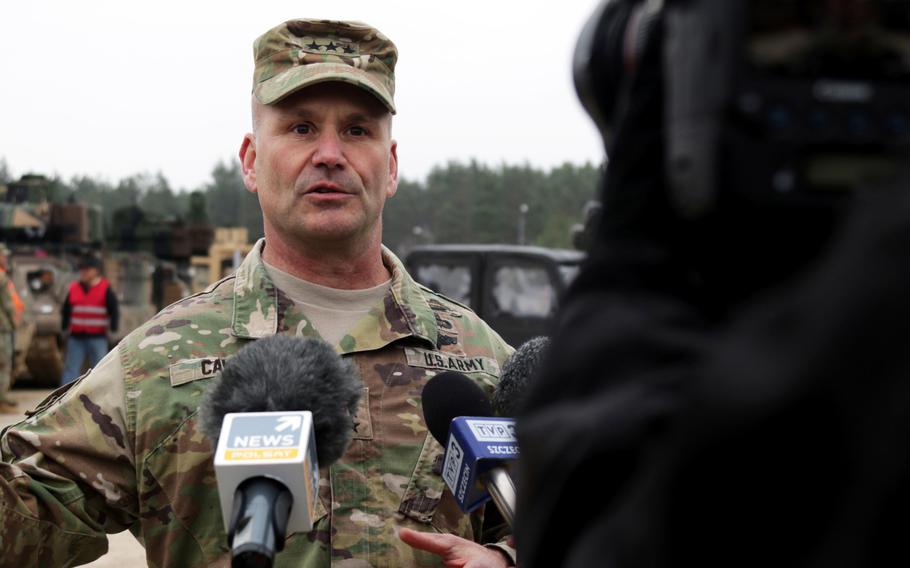 Lt. Gen. Christopher Cavoli, U.S. Army Europe commander, is interviewed by media outlets during a visit to Drawsko Pomorskie Training Area, Poland, March 21, 2019. Days before it is due to host a large military exercise with the U.S., Poland was hit by a barrage of disinformation this week. (Christina Westover/U.S. Army)

Lt. Gen. Christopher Cavoli, U.S. Army Europe commander, is interviewed by media outlets during a visit to Drawsko Pomorskie Training Area, Poland, March 21, 2019. Days before it is due to host a large military exercise with the U.S., Poland was hit by a barrage of disinformation this week. (Christina Westover/U.S. Army) 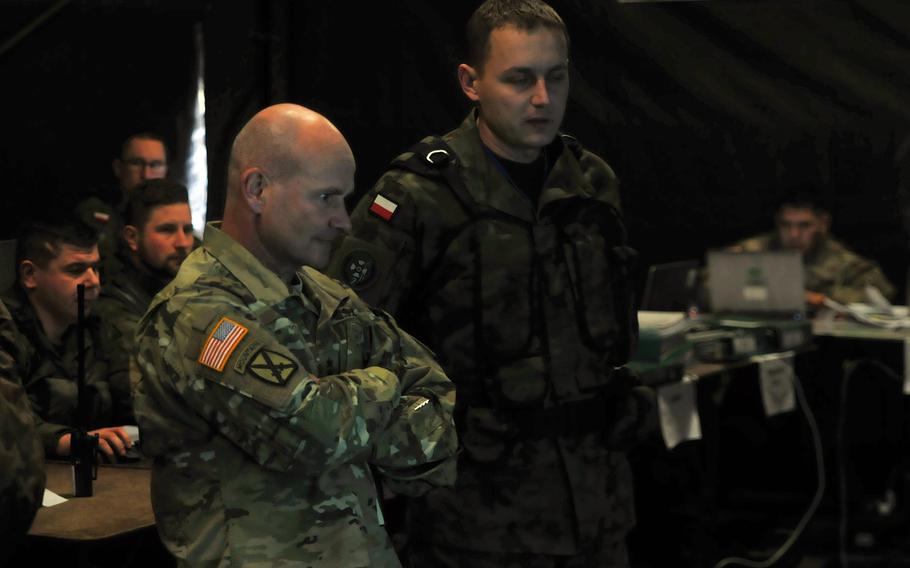 Poland was hit with a barrage of fake news stories this week, including a phony interview with a U.S. commander ridiculing allied militaries, days before a major NATO exercise kicks off in the country, Polish officials said.

“The attack coincided with the beginning of the next phase of (the) Defender Europe-20 military exercise hosted by Poland,” Polish government spokesman Stanislaw Zaryn said in a lengthy statement Thursday, in which he blamed Moscow.

Among the bogus reports was a fabricated interview with U.S. Army Europe commander Lt. Gen. Christopher Cavoli, which was published on a website notorious for spreading disinformation and was then picked up by other sites, Polish officials said.

The flurry of fake news comes as Poland prepares to host the Agile Spirit exercise in June, the first large-scale exercise with the U.S. since the coronavirus pandemic forced most major training events to be cancelled.

The drill is part of the Defender Europe-20 effort, which was to be the largest Army exercise on the Continent in more than 25 years but was significantly scaled back when the coronavirus hit.

Defender Europe was one of the topics covered in the fake interview with Cavoli, with fabricated statements about a lack of preparedness for the exercise among Polish and Baltic militaries attributed to the USAREUR commander.

Another phony story focused on U.S. troops who had unflattering things to say about their Polish counterparts. Among the websites that picked up the fake news stories was the official site of the town of Orzysz in northeastern Poland, where U.S. troops are based as part of a NATO mission, Polish officials said.

The disinformation campaign is an attempt to break down alliance cohesion, “destroy the image of the U.S.” and weaken its engagement in Europe, and raise doubts about the reliability of countries on NATO’s eastern flank, Zaryn said.

Russia is suspected of being behind the ongoing attacks, which bear the hallmarks of previous disinformation campaigns led by the Kremlin, Zaryn said.

“The military cooperation between the U.S. and Poland is constantly targeted by Russian activities,” he said.

Other alliance members on the eastern flank, including the Baltic states — which were annexed by the Soviet Union after World War II — have also been targeted in recent months by fake news stories, some of which have seized on the coronavirus to try to undermine NATO.

In February, a phony story claimed an American soldier deployed to Lithuania was infected with the coronavirus. Lithuania’s Kauno Diena newspaper said the false story was the work of hackers and was visible for about 10 minutes before being taken down.

Lithuania’s Defense Ministry last month said there had been 807 cases of false or misleading information since February about the virus, much of it focused on Lithuania.

Alarmed by such cases, allies have taken to social media with greater frequency to shoot down fake stories when they pop up.

But the hackers are just as active. No sooner were the fake articles and Cavoli interview taken down in Poland than other bogus reports were posted, including one that claimed the deleted disinformation wasn’t the work of Russian hackers, but of the Polish authorities, Zaryn said.