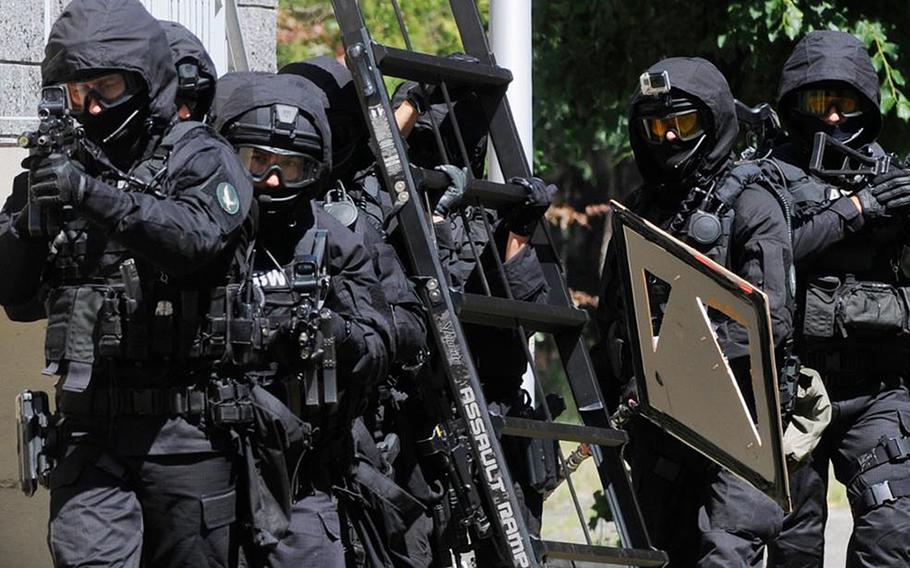 Two Iraqis who were detained in June by Poland's counter-terrorism and counter-intelligence service, the Internal Security Agency, or ABW, were charged with helping to fund the Islamic State terrorist group in a court in Wroclaw, in western Poland, Dec. 14, 2020. (Poland Special Services )

Polish authorities have charged two Iraqi citizens with financing the Islamic State, following a yearslong investigation into money transfers to a German man who went to Syria to join the terror group.

The two Iraqi men, who were charged on Dec. 14 in the western Polish city of Wroclaw, are accused of acting as middlemen for money transfers sent between February 2015 to April 2016 to the man and his wife in Iraq and Syria by relatives in Germany, Poland’s National Public Prosecutor’s Office said in a statement.

Family members in Germany sent money to them at least twice, the statement said. Authorities did not name the family or the recipients of the funds, but information in the statement indicates the militant was a man identified in earlier news reports as Mario Sciannimanica.

An investigation conducted between 2017 and this year by Poland’s counterterrorism and counterintelligence service found that the Iraqi men acted as brokers for the money transfers under a system known as “hawala.”

Hawala allows for speed and anonymity, and its lack of formalities allows it to operate under the radar of the official banking system, the prosecutor’s office said.

Payers give cash to a broker, or hawaladar, who then sends orders via fax, email, phone call, messaging app, social media post or other methods for money to be released to the recipient by a broker in another location.

The system, which dates back to the 8th century, offers advantages in poor countries where access to formal banking institutions is limited, but is also favored for illicit purposes, an entry on the financial information website Investopedia says.

An aspiring rapper from the Cologne area, Sciannimanica converted to Islam in 2011 and traveled to Syria via Turkey in early 2013 to join the jihad, Polish authorities said. He reportedly went by the alias Abu Zubayr al Almani.

His wife, identified in German media as Derya O., reportedly met him after he had joined ISIS. Said to have been the victim of sex trafficking in Germany where she was pimped out by a Hells Angels member, she was smuggled into Syria in 2014 after meeting Sciannimanica via Facebook.

The couple spent their wedding night in a former ISIS torture cell with blood still on the walls and chains hanging from the ceiling, reported Germany’s Bild newspaper, which followed Derya O. around for months and released a documentary on her in February 2019.

Sciannimanica was reportedly killed in Iraq in mid-2016. While his family was told he died in a U.S. Air Force strike, Bild reported that an ISIS source claimed the terrorist group killed him after trying him for spying.

After his death, his wife fled the Islamic State and was eventually detained in Turkey before being brought back to Germany, where she was convicted last year on charges including war crimes for living in properties taken from their rightful owners, the Hellweger Anzeiger newspaper reported.

The woman, who had a child with Sciannimanica in Mosul, was sentenced to nearly three years in prison last December, but was released early after receiving credit for time served while in detention in Turkey and Germany prior to her conviction.

The two Iraqis, whose names were not released, have been in Polish custody since June, Polish government spokesman Stanislaw Zaryn said. They face up to 12 years in prison if convicted, he said in a statement.