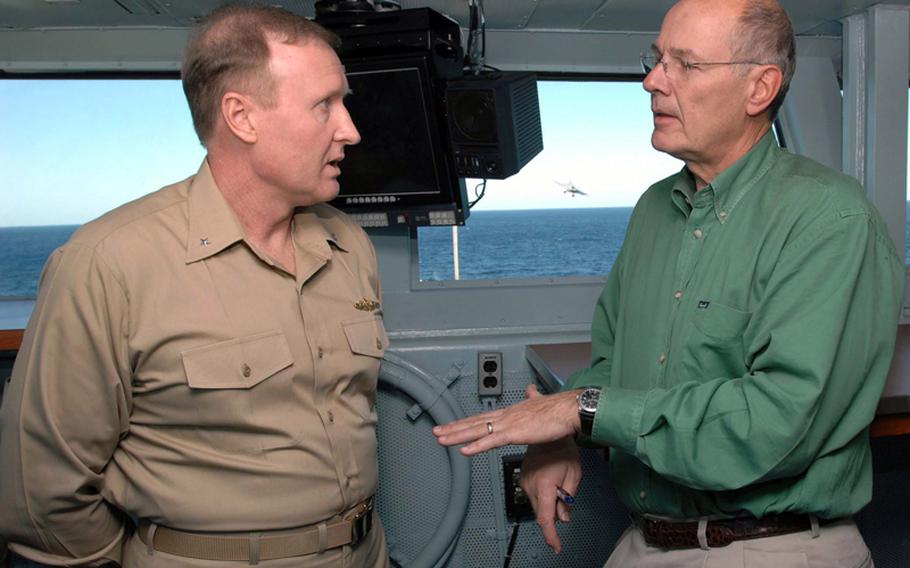 U.S. Navy Rear Adm. Frank Pandolfe, then commander of Carrier Strike Group 2, speaks with Harry Smith of CBS News in the flag bridge of USS Theodore Roosevelt while under way in the Gulf of Oman in November, 2008. Pandolfe has been nominated to be the next commander of the Navy’s 6th Fleet (Jonathan Snyder/U.S. Navy file photo)

NAPLES, Italy &mdash; Navy Rear Adm. Frank C. Pandolfe has been nominated to be the next commander of the Navy&rsquo;s 6th Fleet, according to a Pentagon announcement.

Pandolfe will pin on the rank of vice admiral when he is confirmed. In addition to 6th Fleet command, Pandolfe will also serve as commander, Striking and Support Forces NATO, as well as deputy commander of U.S. Naval Forces Europe and Africa, and commander of Joint Force Maritime Component Europe.

Pandolfe is currently serving as director of the Surface Warfare Division for the Office of the Chief of Naval Operations at the Pentagon.

If confirmed, Pandolfe will replace Vice Adm. Harry B. Harris Jr., who was nominated in June to become assistant to the chairman of the Joint Chiefs of Staff.