Pair of U.S. B-1 bombers train with Swedish, Norwegian fighters over Scandinavia 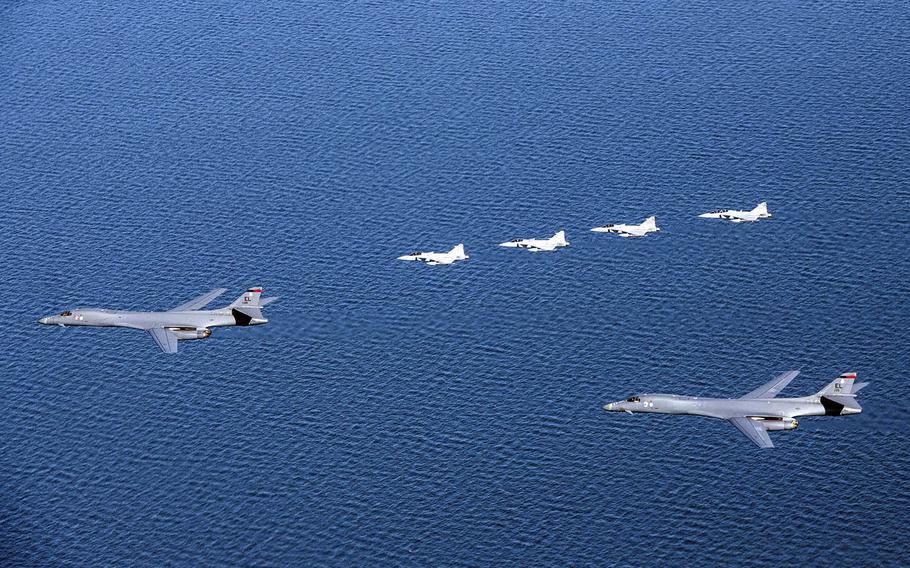 A pair of the bombers flew from Ellsworth Air Force Base, S.D., to integrate with the Swedish Armed Forces jets and conduct close-air support training with Swedish Joint Terminal Attack Controller ground teams at Vidsel Test Range, the Air Force said in a news release Thursday.

The bombers’ 23-hour nonstop mission was made possible with refueling planes provided by Great Britain and the Netherlands, the news release said.

“This was a great opportunity to operate in new territory and clearly demonstrates the flexibility, credibility, and the lethality of our nation’s bomber force,” Col. David Doss, commander of the 28th Bomb Wing, said in the news release. “Operations like this enhance our readiness and ensure we are ready to respond to any contingency or challenge across the globe.”

The Gripen, built by Saab, is a multi-role fighter in use by several NATO countries. Among its capabilities, it carries beyond-visual-range air-to-air missiles. The B-1s were escorted by Royal Air Force fighter jets while over the United Kingdom.

The bombers also integrated with Norwegian F-35 fighter jets to tactical sorties and conduct a low-approach over Orland Air Station, which is home to the Royal Norwegian Air Force’s F-35 fleet that only recently became operational, the news release said.

Bomber missions such as this “showcase our ability to respond globally from anywhere,” Gen. Jeff Harrigian, commander of U.S. Air Forces in Europe and Air Forces Africa, said in the news release.

The Air Force is undergoing a shift in how it deploys bombers, adopting a model reflecting the U.S. National Defense Strategy’s objectives of strategic predictability and operational unpredictability.

The Air Force is also refocusing B-1 training away from the close-air support that has been commonplace in the Middle East and toward precision strikes with, for example, long-range anti-ship missiles, Maj. Gen. Jim Dawkins Jr., commander of the Eighth Air Force and the Joint-Global Strike Operations Center at Barksdale Air Force Base, La., told military.com Tuesday.

The B-1 shift was particularly applicable in the vast space of the Pacific Ocean and the emerging “great-power” competition between America and China, Dawkins said.

“Not only are we resetting the airplane’s mission-capability rates and the training done for the aircraft, we’re also resetting how we employ the airplane to get more toward great power competition to align with the National Defense Strategy,” he said.

The value of the mission to Scandinavia on Tuesday was its rare opportunity for B-1 aircrews to integrate with NATO partners they might work with in future conflicts, the news release said.

“While preparing for these missions, our aircrew plan a tactical scenario with mission leads from all participants and learn the capabilities and limitations of unfamiliar air assets,” Lt. Col. Thomas Taylor, commander of the 34th Bomb Squadron, said in the news release.

“In future wars, the enemy may not afford us the luxury of staging from a base only a few hours from the target area,” Taylor said. “These sorties train our aircrew to be just as lethal on a 24-hour combat mission as they are on a three-hour training mission.”

The 34th Bomb Squadron flew the first B-1 overseas strike in Libya for Operation Odyssey Dawn on March 27, 2011, the news release said.