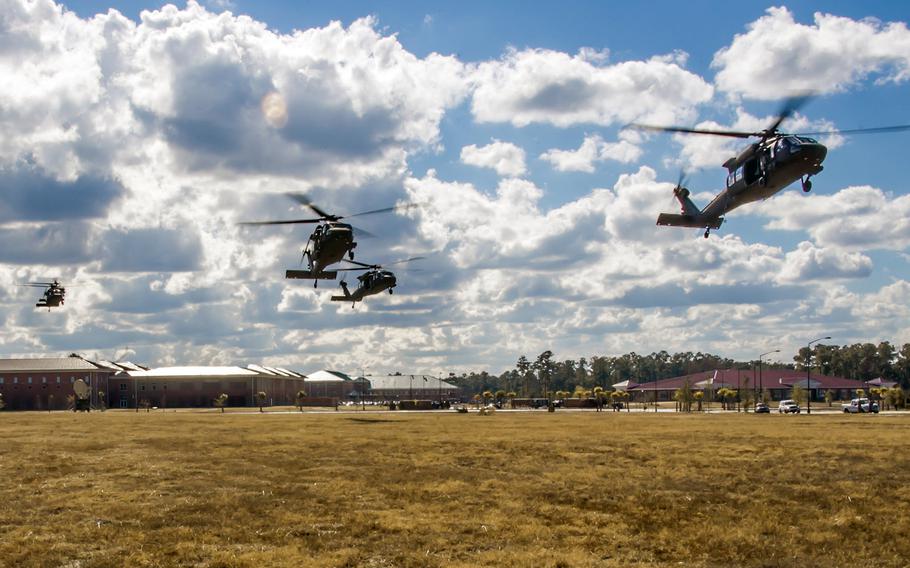 UH-60M Black Hawk helicopters from the 3rd Infantry Division begin to land in unison Dec. 1, 2014, at Fort Stewart, Ga. U.S. Army Europe announced on March 3, 2015, that 450 soldiers and 25 Black Hawk helicopters from the unit will be deploying to Illesheim, Germany, later in March as part of Operation Atlantic Resolve. (Richard Wrigley/U.S. Army)

GRAFENWÖHR, Germany — An additional 450 soldiers and 25 Black Hawk helicopters will join the expanding roster of units converging on eastern Europe in March as part of a longer-term effort to reassure allies worried about Russia’s intentions.

From the staging ground there, they will then deploy in support of Operation Atlantic Resolve, a multinational training mission to reassure Poland and the Baltic countries of NATO’s commitment in the face of Russia’s aggressive moves in Ukraine.

The unit will remain deployed for about nine months, U.S. Army Europe said in a March 3 news release.

While in Europe they will serve as a supporting element to the Operation Atlantic Resolve ground forces, led by the 1st Armor Brigade Combat Team, 3rd Infantry Division, from Fort Stewart, Ga., as that unit assumes the role of the regionally aligned force in the area. The Vilseck-based 2nd Cavalry Regiment is currently holding that position.

“USAREUR right now is running [Operation Atlantic Resolve], but the commander of USAREUR also has responsibilities elsewhere throughout Europe,” said 4th ID mission command element deputy chief of staff Maj. George H. Johnson. “He just has somebody now that he can give particular direction to.”

George will run the first iteration of the mission command element in Europe. His first task, according to Johnson, will be to coordinate the transition with the outgoing 2CR.

After that, the 4th Infantry soldiers will settle in for their first long-term command of troops in Europe as Operation Atlantic Resolve continues.

“USAREUR was running that themselves and that is because there hasn’t been a division headquarters in Europe since the 1st Infantry Division left,” Johnson said. “Now they see a place where having a division headquarters in Europe could help in synchronizing between the militaries of nations, making sure that we train together and learn how to work and operate together. That’s what we’re here to do."