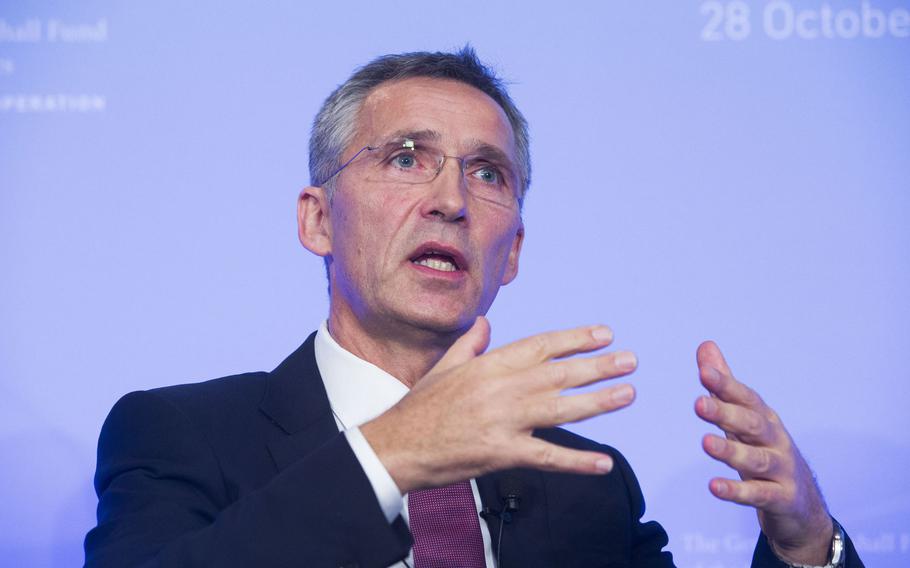 STUTTGART, Germany — As NATO’s first secretary-general to hail from a country that shares a border with Russia, Jens Stoltenberg says today’s tensions with Moscow conjure memories from a Cold War childhood when “NATO was there to protect us.”

“I remember visiting that border when it was completely closed back in the days of the Soviet Union. When looking across was like staring into something dark and scary,” Stoltenberg, a former Norwegian prime minister now heading up the 28-nation alliance, said on Tuesday.

Nowadays, there is a visa-free zone between Norway and Russia, where hundreds of thousands of people cross the border each year. But Russia’s moves around Ukraine during the past year have threatened such progress and brought about echoes from the past, which NATO must be prepared to counter, Stoltenberg said during a speech at the German Marshall Fund in Brussels.

NATO’s new top official laid out his priorities during his first major policy speech since assuming leadership of the 28-nation alliance earlier this month. Stoltenberg took up his post from Anders Fogh Rasmussen, his predecessor as the military alliance’s secretary-general who had been criticized by some NATO allies for his sharp comments about Moscow’s policies in Ukraine.

Much of Stoltenberg’s speech also focused on Russia.

“NATO does not seek confrontation with Russia. And nobody wants a new Cold War, 25 years since the fall of the Berlin Wall,” he said. “But we cannot and will not compromise on the principles on which our alliance and the security of Europe and North America rest. This is my firm conviction.”

Going forward, Stoltenberg said his main goals will be pushing forward with a new action plan that aims to elevate NATO’s overall state of readiness through the placement of equipment at strategic staging bases in eastern Europe, a new rapid-reaction force and a heightened presence of rotational forces on NATO’s eastern frontier.

“This is the biggest reinforcement of our collective defense since the end of the Cold War,” Stoltenberg said. “We are making our forces more agile. And able to deploy quickly whenever threats emerge. From any direction.”

The size and shape of NATO’s new “spearhead” reaction force, expected to be around 4,000 troops, will be decided when defense ministers meet in February.

At the same time, Stoltenberg struck a more conciliatory and diplomatic tone than Rasmussen, emphasizing the need to find ways to work with Moscow.

“Russia is not just Norway’s neighbor,” he said. “It is NATO’s biggest neighbor. And both NATO and Russia are here to stay. So we simply cannot ignore each other. One way or the other, we will have a relationship. The question is what kind.”

The other alternative is a relationship based on mutual respect, not suspicion. On the rule of law, not the law of the strongest. On common interest, not illusions.

Meanwhile, NATO will need to keep an eye on unrest along its southern flank, where Islamic militants are operating just across the border from ally Turkey, Stoltenberg said.

“To the south, borders are disappearing. States are fragile. ISIL, and other extremist groups across North Africa and the Middle East, are spreading violence and instability. And they risk exporting terrorism to our streets,” Stoltenberg said.

“And extremism is fueling instability,” he said. “But there is no choice between providing for our security in the east or in the south. We have to do both.”

To deal with such threats, NATO allies need to reverse a decades-long trend of cuts in defense spending. Like previous secretary-generals, Stoltenberg said NATO members must allocate more funds for defense, urging members to follow through with recent pledges to boost expenditures.

“We all need to invest in our alliance politically and financially to make sure that NATO has the means to do the difficult jobs that it has to do,” Stoltenberg said, “and the political will to use those means, when necessary.”