New F-35 squadron at Lakenheath to be nicknamed soon 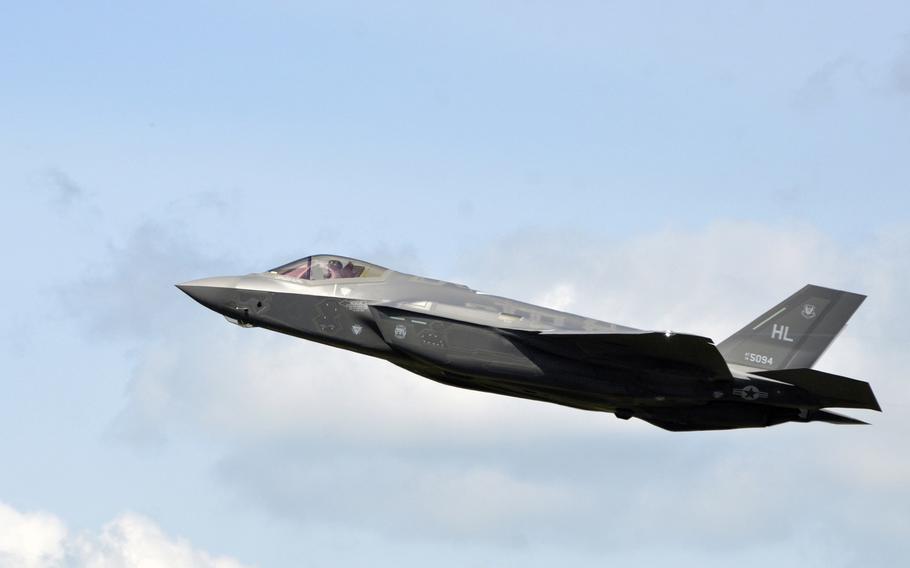 Buy Photo
An F-35A Lightning II from Hill Air Force Base, Utah, takes off from RAF Lakenheath, England, in 2017. The search for a name for the 495th Fighter Squadron, the first F-35 unit that will be based in Europe, is down to five finalists: Archangels, Sabres, Sentinels, Swordsmen and Valkyries. (Stars and Stripes)

The 48th Fighter Wing is closing in on a nickname for its new squadron of F-35A Lightning II fighter jets.

From 700 different suggestions submitted this fall, a team designated by the wing chose five finalists: Archangels, Sabres, Sentinels, Swordsmen and Valkyries, base officials said this week.

To help with the final selection, the wing conducted a poll from Dec. 30 to Jan. 6 over RAF Lakenheath’s Facebook page and received more than 4,000 votes, said Capt. Marie Ortiz, a wing spokeswoman.

The decision, expected within 30 days, is now with the squadron and wing leadership, she said in an email Tuesday.

The wing described the significance of each name as follows: Archangels — opposite of the 493rd Fighter Squadron, an F-15C/D squadron at Lakenheath nicknamed “The Grim Reapers”; Sabres and Swordsmen — derived from the sword on the former 495th Tactical Fighter Squadron unit patch; Sentinels — sentry protectors, standing watch; and Valkyries — in Norse mythology, a Valkyrie is a female figure that chooses who lives or dies in battle.

More than 300 comments were posted along with the Facebook poll, with some offering up strong opinions.

“Archangel reminds me of that guy in a white suit with a walking suit and an eye patch in Airwolf so you can’t really call yourselves that! Swordsman gets my vote,” said one comment.

But someone else pointed out that the Navy’s Strike Fighter Squadron 32, which flies the F/A-18F Super Hornet out of Naval Air Station Oceana in Virginia Beach, Va., is nicknamed the “Fighting Swordsmen.”

Some commenters gave the nod to the Valkyries. “They already have a theme song,” a commenter said, likely referring to Richard Wagner’s “Ride of the Valkyries,” which was featured in Francis Ford Coppola’s 1979 Vietnam War film, Apocalypse Now.

The F-35As headed to Lakenheath sometime this fall will be the first U.S. Air Force fifth generation jets to be based overseas.

The former 495th Tactical Fighter squadron, called the “Thundervarks,” flew F-111 Aardvarks out of Lakenheath in England during the Cold War.

“We’re looking for an updated name for an updated airframe,” Master Sgt. Matthew Plew, a 48th Fighter Wing spokesman, told Stars and Stripes in September. “‘Thundervarks’ doesn’t really have the same stick” for an F-35 squadron.

The new F-35 squadron will have about 24 aircraft and 50 personnel, with another 600 or so associated with its aircraft maintenance unit, base officials said. Lakenheath is expected to eventually host two F-35 squadrons.