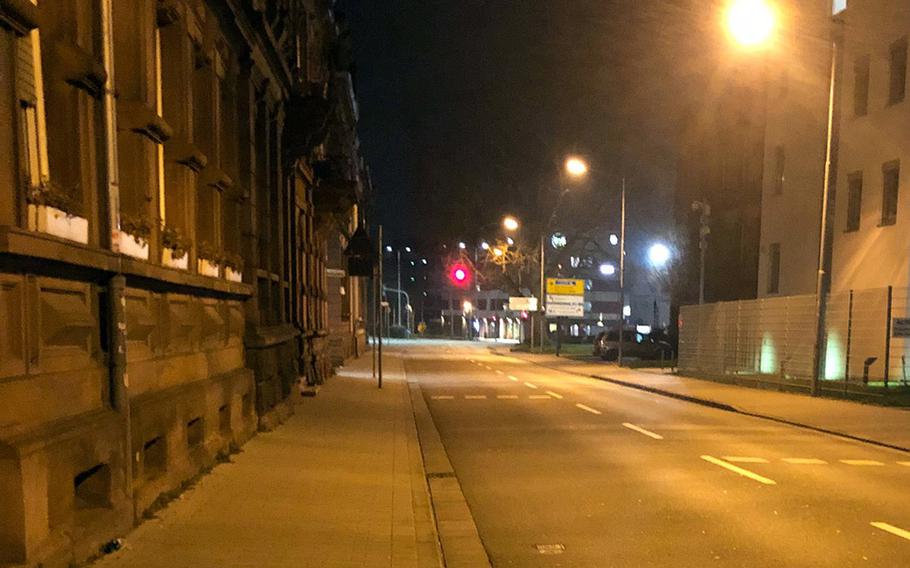 Buy Photo
Logenstrasse, near the soccer stadium and train station in Kaiserslautern, Germany, is empty during a curfew imposed because of the coronavirus in the spring of 2020. The streets soon will be devoid of most Americans in the evenings as the Kaiserslautern-based 21st Theater Sustainment Command has imposed a 10 p.m. to 5 a.m. curfew on personnel and family members, starting Jan. 4, 2021. (Karin Zeitvogel/Stars and Stripes)

KAISERSLAUTERN, Germany — One of the largest Army commands in Europe is reimposing a curfew and limiting travel as the Continent struggles to contain a second wave of the coronavirus, but the new restrictions don’t take effect until January.

Until then, soldiers, Army civilians and their families affiliated with the 21st TSC must abide by host-nation rules. They will have to follow whichever rules are stricter once the order takes effect, officials said Thursday.

The new rules, outlined in an order released Thursday by 21st TSC commander Maj. Gen. Christopher Mohan, restrict unofficial travel and outdoor exercise to a radius of 30 kilometers, or around 18 miles, from an individual’s residence, and impose a 10 p.m. to 5 a.m. curfew.

Once they take effect Jan. 4, outdoor exercise must be done in a low-density area, either alone or with members of the immediate household, the order said.

Gyms may be used if “strict protective measures” are followed and the person using the facility complies with host-nation laws, garrison policies and the order.

In Germany, where thousands of 21st TSC soldiers and civilian personnel are based, gyms have been closed since the beginning of November.

Travel can extend beyond 18 miles to take someone to the airport closest to an individual’s duty location, or to run “essential errands” such as grocery shopping, picking up takeout food, going to the bank or post office, seeing a doctor or going to the pharmacy, or getting gas or services for a vehicle, it said.

Service members who live in barracks will only be allowed to leave their rooms or suites for the same reasons as those who live in on- and off-post housing, the order said.

All parties and social gatherings are banned, and soldiers are prohibited from frequenting bars, clubs, hookah lounges, cinemas, recreation facilities such as pools and spas, or to dine indoors at restaurants, it said. Germany has had similar rules in place since November.

The restrictions are largely the same as those spelled out in a general order in the spring, when the first wave of the coronavirus swept across Europe.

Germany successfully curbed the spread of the virus last spring but has struggled since October to bring down high numbers of infections in the second wave.

The order will remain in effect until Jan. 17 at least — a week after German officials are due to meet to decide whether to lift tough coronavirus restrictions imposed Dec. 13.