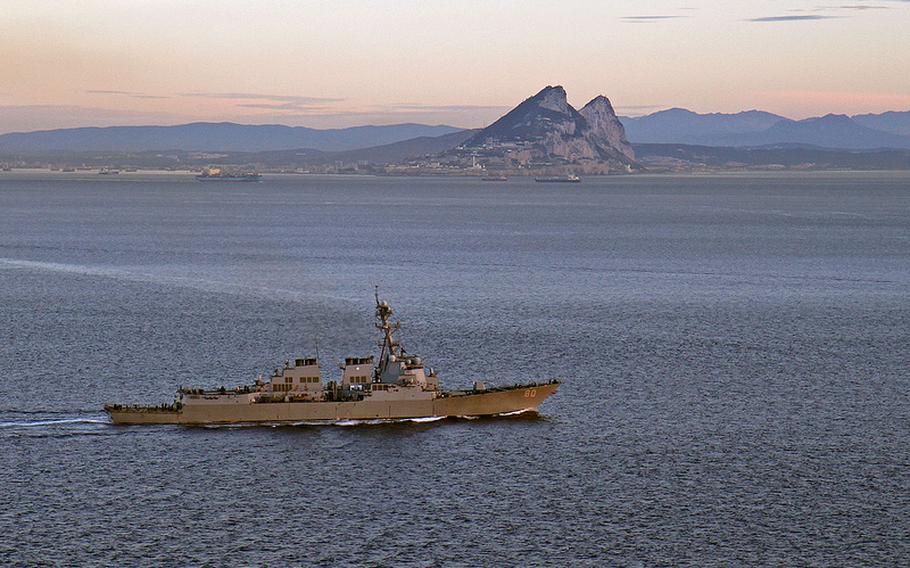 STUTTGART, Germany — A team of U.S. Navy SEALs seized control early Monday of a commercial tanker that was hijacked in the Mediterranean earlier this month by a small group of armed Libyan men, the Defense Department said.

The SEALs, acting under an order from President Barack Obama, embarked from the USS Roosevelt, which is deployed to the Mediterranean as part of the George H.W. Bush Carrier Strike Group.

“No one was hurt tonight when U.S. forces, at the request of both the Libyan and Cypriot governments, boarded and took control of the commercial tanker Morning Glory, a stateless vessel seized earlier this month by three armed Libyans,” DOD spokesman Rear Adm. John Kirby said in a news release.

A Defense Department official, speaking on condition of anonymity, said the two-hour operation resulted in the arrest of three Libyans and the discovery of two AK-47s on board. No shots were fired during the action, he said.

The boarding operation was conducted about 3 a.m. Central European Time in international waters southeast of Cyprus. The SEALs, who are based out of Stuttgart, Germany, are attached to Special Operations Command Europe.

The USS Roosevelt provided helicopter support and served as a command and control and support platform for the other members of the force assigned to conduct the mission, Kirby said.

The Morning Glory is carrying oil owned by the Libyan government National Oil Company. The ship and its cargo were illicitly obtained from the Libyan port of As-Sidra.

The Morning Glory is bound for Libya along with a team of sailors from the USS Stout. The sailors will supervise the transit, Kirby said.

The defense official said it would take about four days for the tanker, which was seized about 15 nautical miles southeast of Cyprus, to return to Libyan waters. About 25 members of the Stout’s crew were on board to provide security, navigation and communications.

Libya has been in a state of political chaos since the NATO-backed overthrow three years ago of former dictator Moammar Gadhafi, with armed gangs ruling vast stretches of the desert nation. Oil exports — the pillar of the country’s economy — plummeted after separatist militias in eastern Libya seized key oil-exporting ports and other facilities.

Separatist leaders are now seeking to keep export earnings for themselves by bypassing the impotent central government in Tripoli and selling the eastern region’s oil directly to foreign markets.

Libya’s ineffectual prime minister, Ali Zeidan, was ousted earlier this month when he failed to prevent the Morning Glory from sailing away after it was loaded with the region’s oil. Zaidan, himself accused of corruption, fled to Europe after a parliamentary vote of no confidence.

On March 9, U.S. officials warned that any attempt to sell the stolen oil aboard the Morning Glory would amount to theft from the Libyan National Oil Company and its joint venture partners, which include U.S. companies in the Waha consortium.

“Any oil sales without authorization from these parties places purchasers at risk of exposure to civil liability, penalties and other possible sanctions in multiple jurisdictions,” State Department spokeswoman Jen Psaki said.

The Morning Glory was flagged in North Korea but later de-registered by Pyongyang in connection with the incident, various media have reported.

The Bush Carrier Strike Group and its 6,000 sailors departed Norfolk, Va., last month on what is only the carrier’s second deployment. Four ships and eight aircraft squadrons are accompanying the Bush to the U.S. 6th Fleet and 5th Fleet areas of responsibility as part of the carrier strike group.

The USS George H.W. Bush will remain in the Mediterranean Sea for several days longer than planned as part of a U.S. effort to reassure allies on edge over Russia’s incursion into Ukraine’s Crimean region, the DOD said last week.