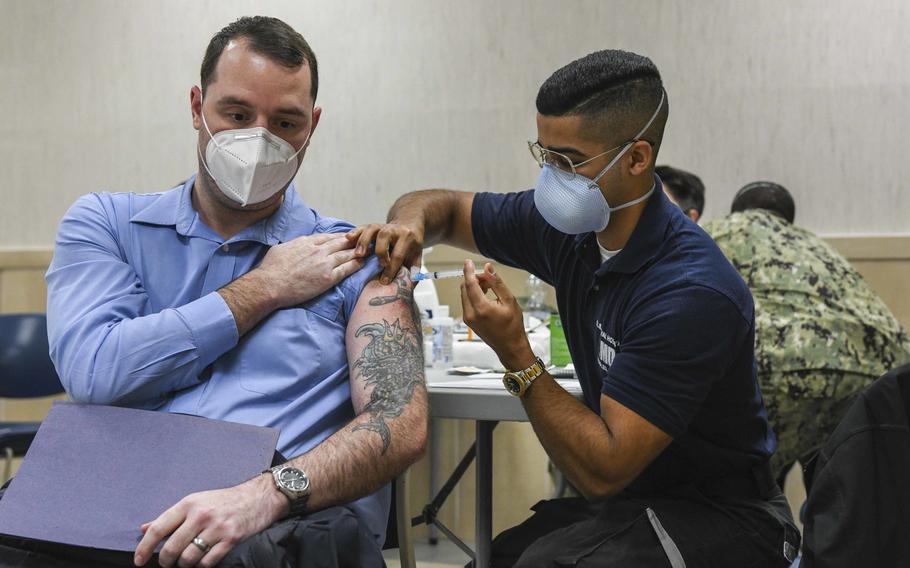 VICENZA, Italy — The U.S. Navy base in Naples is among the first places where all adult Americans who want a coronavirus vaccination can get one.

All those who sought out the shots during the base’s Phase 1 — which began Jan. 8 and included health care providers, first responders, essential workers, deploying troops and people age 65 and older — have received them, Navy officials said.

“We are on Phase 2, which is persons over 18 for our community,” said Christina Clark, a spokeswoman for U.S. Naval Hospital Naples.

Walk-ins would be welcome Saturday, she said, adding that family members are also eligible, but local nationals are not.

Officials at the Defense Health Agency in Washington were not immediately able to comment on how far along other U.S. military bases had come in their vaccination campaigns Friday.

The Navy in Naples sent out an email Thursday announcing an open call to those interested in getting the vaccine, lasting through Saturday. It said all active duty, Defense Department civilian and U.S. contractors who had not received their first dose of COVID-19 vaccine could report to the community center.

“We’ve had a dedicated team and we worked through all the (priority lists),” Clark said. “We’ve touched every command, we went through our high-riskers and we’ve moved on. We’re trying to get shots into arms and protect the community.”

Clark said the hospital had been receiving doses of the Moderna vaccine regularly and anticipated that would continue.

“We’re glad the people in this community want the vaccine,” she said.

Other U.S. bases in the country, including U.S. Army Garrison Italy in Vicenza and Aviano Air Base in the Italy’s northeast, hadn’t announced a Phase 2 transition as of Friday.

“We are not there yet, not on the Army side,” Gino Mattorano, a spokesman for Regional Health Command Europe, said Friday. “I’m pretty sure we have not gone beyond Phase 1 at any Army (military treatment facility.)”

AstraZeneca has told the EU that of its initial batch of 80 million shots, only 31 million would immediately be delivered once its vaccine got approved, The Associated Press reported Wednesday. A smaller glitch has affected the deliveries of Pfizer-BioNTech shots.

Both companies say they are facing operational issues at plants that are temporarily delaying the rollout, AP reported.