NATO to test deployment speed with largest exercise in a decade 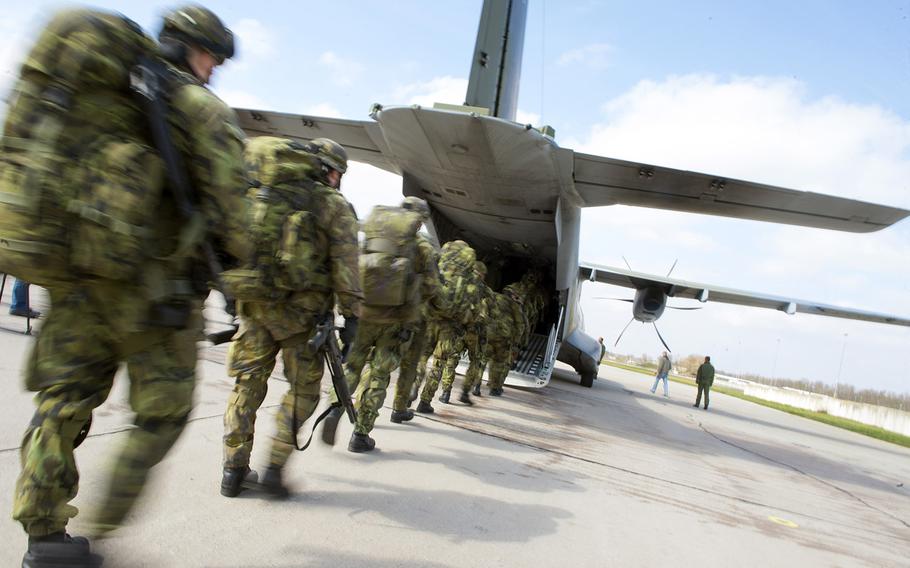 The speed with which NATO forces can respond to a crisis will be a focus of Trident Juncture 15, a massive alliance exercise set to spread across southern Europe this fall.

More than 36,000 troops from 30 nations will participate in the event, billed as the largest NATO exercise in more than a decade, planners said during a press conference in Brussels on Tuesday. Operations will range across Portugal, Spain and Italy, and involve land forces, air exercises and maritime components in both the Atlantic and Mediterranean over a span of nearly two months.

Their goal will be to aid the fictitious country of Sorotan, a non-NATO member torn by internal strife and facing an armed threat from an opportunistic neighbor.

The abilities of the NATO Response Force and its new quick-response Spearhead task force will be closely watched by observers.

“Speed matters — you will see it in the air, at sea and on the land,” said German Gen. Hans-Lothar Domröse, who will lead the exercise. Domröse is preparing to command the NATO Response Force next year.

Planning for Trident Juncture began two years ago, the intention being to mark NATO’s transition from its counterinsurgency-focused campaign in Afghanistan to a broader spectrum of operations.

Russia’s seizure of Crimea, the expansion of Islamic militant groups in North Africa and the Levant and NATO responses to both have since changed those plans, officials said. The alliance recently decided to increase the size of the response force and created the Spearhead force, designed to deploy to a crisis with 48 hours.

Winning political approval and fielding deployable forces from NATO members — both among the biggest challenges to any alliance operation — will not be part of the exercise, planners said.

Participants will instead deal with threats ranging from terrorism to propaganda operations and force-on-force fighting, a range of contingencies often lumped together as “hybrid warfare.”

International organizations like the African Union and the European Union will participate, as will non-governmental organizations such as the Red Cross. International observers, including those from Russia, will also be invited to attend, planners said. Russia has shown interest in recent NATO operations, sending ships and planes to observe and make themselves known.

“They will watch us anyhow, invited or not,” Domröse said.