NATO Secretary-General Jens Stoltenberg told reporters Monday that President-elect Joe Biden has been invited to a summit, to be held on an undisclosed date early next year, where the alliance will discuss matters such as the mission in Afghanistan, Russian deterrence and China. (NATO)

NATO Secretary-General Jens Stoltenberg told reporters Monday that President-elect Joe Biden has been invited to a summit, to be held on an undisclosed date early next year, where the alliance will discuss matters such as the mission in Afghanistan, Russian deterrence and China. (NATO) 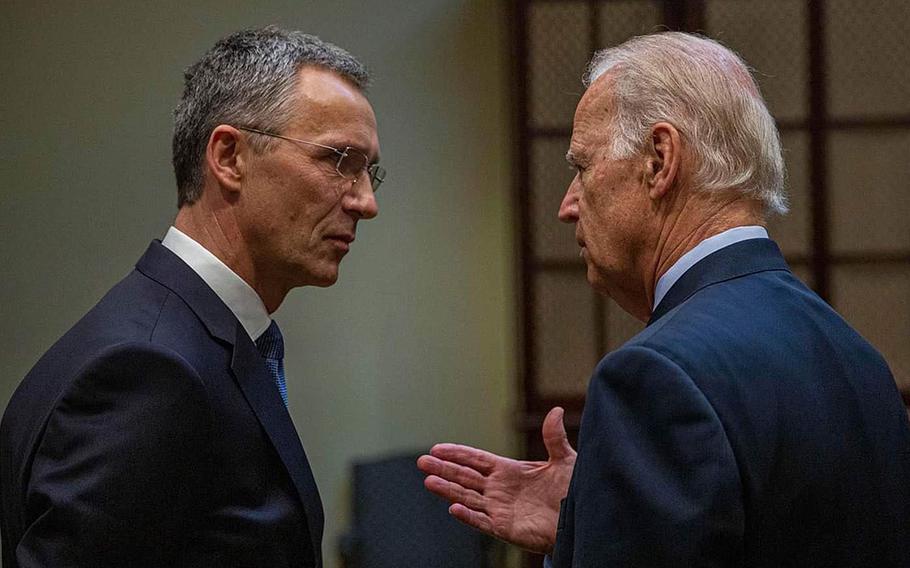 STUTTGART, Germany — NATO’s top official said Monday that he has invited President-elect Joe Biden to a summit early next year, where allies are expected to decide whether to continue their nearly 20-year-old mission in Afghanistan.

“We face a difficult dilemma,” NATO Secretary-General Jens Stoltenberg told reporters at a virtual press conference. “Whether to leave and risk that Afghanistan becomes once again a safe haven for international terrorists, or stay and risk a longer mission with renewed violence.”

Stoltenberg, who was speaking ahead of two days of talks beginning Tuesday with NATO foreign ministers, said the mission in Afghanistan will join matters such as the challenges posed by Russia and China on the agenda.

The foreign ministers meeting, which will include Secretary of State Mike Pompeo, also likely marks the last major NATO gathering during the administration of President Donald Trump, who has been a frequent critic of the alliance.

Allies aren’t expected to make any major decisions during the final days of the U.S. administration. But during a defense ministers’ meeting in February, allies could decide on the way forward in Afghanistan, Stoltenberg said.

A major NATO summit of heads of state, including Biden, could come soon after that in the early part of the year, he said.

The talks among foreign ministers this week are unlikely to have immediate implications for the mission in Afghanistan, where Trump has ordered a force reduction that will leave 2,500 U.S. troops in the country. NATO’s mission to train the Afghan military continues despite the U.S. drawdown, Stoltenberg said.

There is still enough American enabling support, such as airlift, intelligence gathering and medical aid, to allow the NATO mission to continue, he said.

Still, it is unclear how long NATO will remain committed to keeping large numbers of troops in Afghanistan. More than half of the 11,000 service members currently in the country are from non-U.S. NATO states and partner countries.

“This will be a hard and difficult decision,” Stoltenberg said. “There is no way to deny that.”

The U.S. reductions come amid ongoing negotiations for a peace agreement between the U.S.-backed Afghan government and the Taliban.

In February, the United States struck an agreement with the Taliban that called for a full withdrawal of forces by May 2021 if a number of conditions were met, such as refraining from attacks on U.S. and NATO troops and cutting ties to terrorist groups.

However, violence in the country persists with regular Taliban attacks on Afghan security forces.

“In the months ahead, we will continue to assess our presence based on conditions on the ground,” Stoltenberg said. “Whatever path we choose, it is important that we do so together, in a coordinated and deliberate way.”