NATO enjoys strong public support among allies, but Americans less sure of benefits 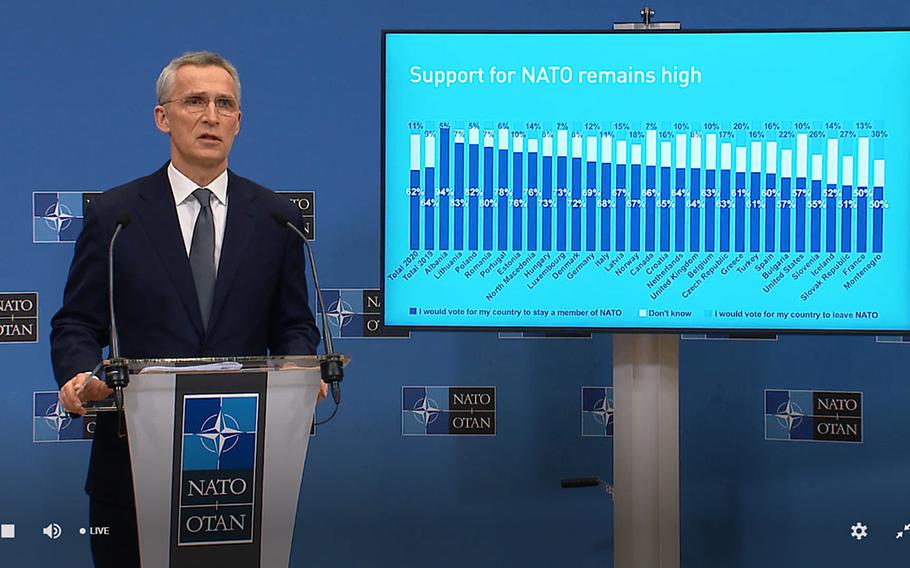 A screenshot of NATO Secretary-General Jens Stoltenberg, March 16, 2021, during the release of the alliance's 2020 annual report. It included a poll commissioned by NATO on attitudes toward the 30-member security pact. (NATO)

STUTTGART, Germany — A majority of people in allied countries want to remain in NATO and think the alliance protects them from aggression, but skepticism runs higher in the U.S. than most other member states, a public opinion poll found.

NATO on Tuesday released its 2020 annual report, which included a poll commissioned by the alliance on attitudes toward the 30-member security pact.

The poll found that 62% of respondents would vote to stay in NATO, compared to 11% stating they would vote for their country to quit the alliance. The rest did not know or had no opinion.

NATO said there also is “enduring confidence in the deterrent effect” of membership, with 58% of allied citizens saying attack by a foreign nation was less likely because of their connection. Only 16% disagreed, the poll found.

But Americans were less convinced. In the U.S., 51 % of people polled thought NATO membership made an attack from an adversary less likely, while 17 % disagreed and the rest weren’t certain. Fifty-seven percent of Americans polled said they would vote to stay in the alliance, while 10% would elect to leave.

Not surprisingly, support for NATO was strongest among the Baltics, Poland and other member states close to Russia’s border.

Tiny Montenegro, where a large ethnic Serb minority is traditionally pro-Russian, ranked last in support, with 50% wanting to remain and 30% wanting out.

Meanwhile, more of those polled — 76 % — believed NATO allies should come to their defense than were willing to have their country come to the defense of another nation.

Sixty-nine percent agreed their nation should defend another ally if attacked, while 9% disagreed, the poll found.

While the NATO polling did not break down which countries were less willing to defend a fellow ally, past polling by the Pew Foundation has found that some member nations, such as Germany and France, were less willing to fight for an ally than the majority of other states. The 2020 Pew survey found 60% of Germans opposed using force to come to a member’s defense, while 53% in France held the same view.

Still, the overall results from NATO’s poling were positive, said Stoltenberg, who noted that 79% of those polled believe cooperation between North America and Europe on security is important.

“This is crucial because we need a strong transatlantic bond to deal with the challenges we face,” he said.