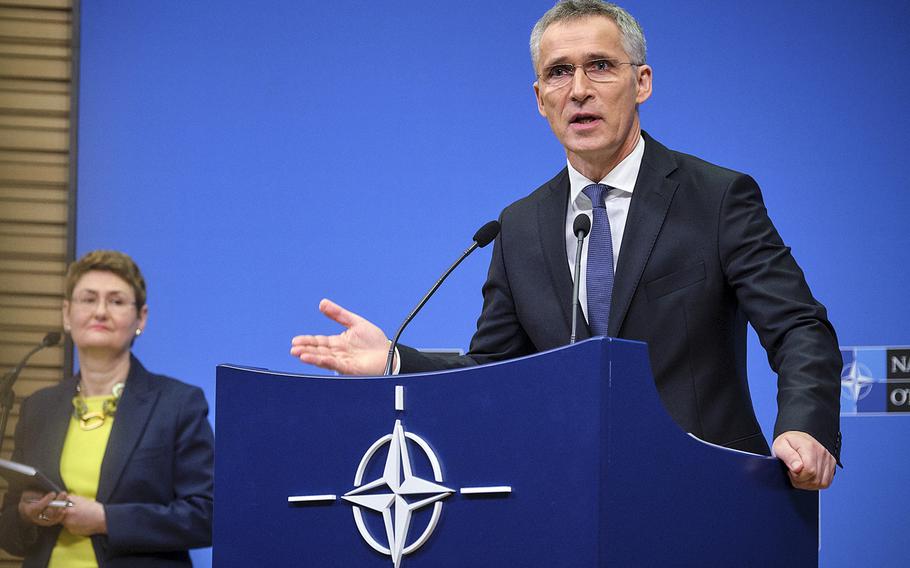 NATO Secretary-General Jens Stoltenberg talks to the media at the alliance's headquarters in Brussels, Belgium, Monday, April 1, 2019, ahead of the meeting of NATO foreign ministers in Washington that begins Wednesday. (Courtesy of NATO)

NATO Secretary-General Jens Stoltenberg talks to the media at the alliance's headquarters in Brussels, Belgium, Monday, April 1, 2019, ahead of the meeting of NATO foreign ministers in Washington that begins Wednesday. (Courtesy of NATO) 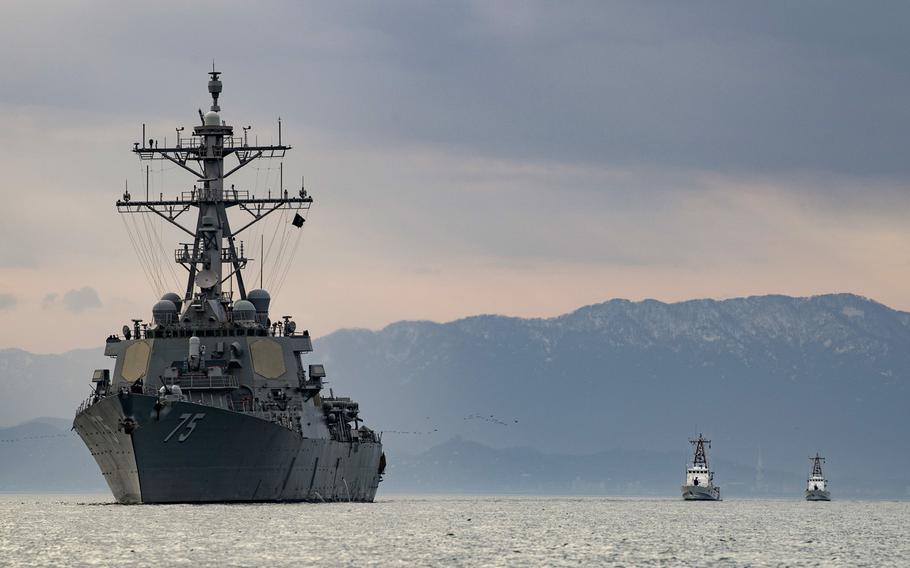 The guided-missile destroyer USS Donald Cook sails alongside Georgian coast guard ships in the Black Sea, Jan. 25, 2019. NATO Secretary-General Jens Stoltenberg said the alliance has stepped up its presence in the Black Sea and would continue to work closely with partners in the region. (Ford Williams/U.S. Navy)

NATO has agreed to invest $260 million to fund a military storage site in central Poland in support of U.S. forces that operate in the region, the alliance’s top official said Monday.

NATO Secretary-General Jens Stoltenberg announced the new measure one day ahead of a meeting Tuesday in Washington with President Donald Trump, who has called on allies to invest more in military matters.

“This will fund storage and maintenance of pre-positioned military equipment — which will speed up reinforcement for Europe,” Stoltenberg said during a news conference at NATO’s Brussels headquarters.

NATO said construction on the site near Powidz, Poland, will begin this summer and is expected to take about two years to complete.

The project is part of about $2.3 billion in NATO funding for various military mobility initiatives that have taken place over the past four years. Speeding the military’s ability to mobilize large numbers of troops, particularly along NATO’s eastern border with Russia, has been a key focus for the alliance.

This week, NATO members will gather in Washington to mark the alliance’s 70th anniversary. Stoltenberg is set to address both houses of Congress on Wednesday and will officiate a meeting of alliance defense ministers.

During that meeting, Stoltenberg said he expects allies to agree to expand their presence in the Black Sea in response to concerns about Russian aggression.

New measures will focus on improving NATO’s “situational awareness” in the region and stepping up support for Ukraine and Georgia — two non-NATO countries that have been involved in conflicts with Russia. Areas of support include “training of maritime forces and coast guards, port visits and exercises, and sharing of information,” Stoltenberg said.

The Black Sea has emerged as a flashpoint with Russia, which seized three Ukrainian ships during a standoff with Ukraine last year. Stoltenberg did not elaborate on which ports allied ships would visit as part of its planned increased Black Sea presence or say whether Ukrainian sites were among the places that would be visited. Three Black Sea nations, Romania, Bulgaria and Turkey, are NATO members.

“NATO has already stepped up its presence in the Black Sea. And we continue to work closely with our partners in the region,” he said.

Since 2016, European allies and Canada have added $41 billion to their defense budgets. “By the end of next year, this will rise to $100 billion,” Stoltenberg said.

Still, Germany is not on track to meet NATO defense spending guidelines by 2024, which is when all members are expected to spend 2 percent of economic output on defense.

“I expect Germany to make good on their pledge together with all other NATO allies,” Stoltenberg said.