NATO: 2014 was a 'black year' for European security 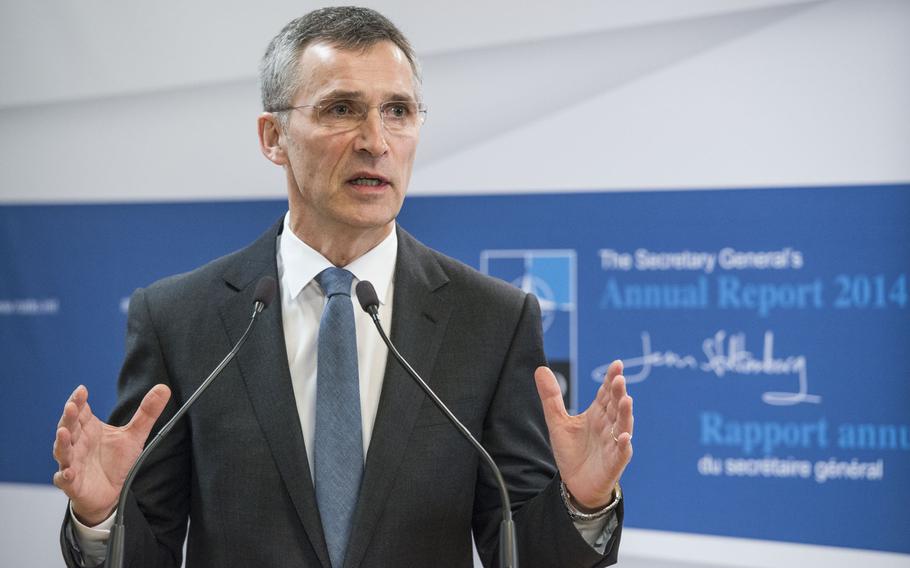 NATO Secretary-General Jens Stoltenberg at his monthly press conference in Brussels, Friday, Jan. 30, 2015. He said 2014 was a "black year" for European security due to Russian actions in Ukraine and growing Islamic radicalism alongside Europe's southern flank. (NATO)

STUTTGART, Germany — If 2014 was a “black year” for European security, the year ahead will test NATO’s ability to respond to new challenges in its own backyard, the alliance’s top official said Friday.

“2014 was not a good year for European security. In fact, it was a black year,” Secretary-General Jens Stoltenberg said during a news conference in Brussels following the release of the organization’s 2014 annual report. “So our security environment has fundamentally changed.”

Going forward, NATO will be focused on a series of new measures, including a continuous presence in a series of eastern European countries, to respond to Russia’s intervention in Ukraine as well as growing concerns about Islamic radicalism along NATO’s southern flank, Stoltenberg said.

The first order of business comes next week when NATO defense ministers meet for two days of talks at the 28-nation alliance’s Brussels headquarters. They are expected to make decisions on a new “Readiness Action Plan” that calls for the formation of a rapid reaction force expected to involve several thousand NATO troops.

“We will also decide on the size and the composition of our new Spearhead Force,” Stoltenberg said. “And setting up NATO command and control units in six of our eastern allies. “This will be the biggest reinforcement of our collective defense since the end of the Cold War.”

Small teams will deploy to Latvia, Estonia, Lithuania, Poland and Bulgaria as part of a command and control unit, which will operate in support of the new spearhead force, Stoltenberg said.

Since Russia’s annexation of Crimea in March, NATO has been galvanized. A year ago, it was focused on its drawdown in Afghanistan and taking steps to ensure partners not fall into a post-war lull. But the crisis in Ukraine has breathed new life into the Cold War alliance, which has been ramping up its presence in eastern Europe as part of an effort to reassure allies along Russia’s periphery who have been rattled by Russia’s actions.

“To the south, violent extremism is at our borders, spreading turmoil across North Africa and the Middle East, and fueling terrorism in our own streets,” he said. “To the east, Russia follows a disturbing pattern. Using military force to annex Crimea, destabilize eastern Ukraine, and intimidate its neighbors, in disregard of international law.”

On Tuesday, the U.S.’s top diplomat for European affairs, Victoria Nuland, called on allies to expedite the installation of new command and control posts in eastern Europe, underscoring the sense of urgency that has emerged within Europe.

“We must install command and control centers in all six frontline states,” said Nuland, a U.S. undersecretary of state, during a talk at the Brookings Institution in Washington. “NATO is a defensive alliance. Our goal is deterrence of aggression. But if that fails, we have to be ready.”

During 2014, NATO also accused Russia of provocative actions near the alliance’s turf.

“Last year, allied aircraft intercepted Russian planes over 400 times. Over 150 of these intercepts were conducted by NATO’s Baltic Air Policing Mission,” Stoltenberg said. “That’s about four times as many as in 2013. So we are staying vigilant.”

Moscow has responded that the flights are routine long-range maritime patrols over international waters, similar to those conducted by NATO aircraft near its own air space.

On Thursday, Britain’s Foreign Office summoned the Russian ambassador after two Russian bombers flew over the English Channel. Although they did not cross into British air space, two RAF Typhoons escorted the Russian planes, which “caused disruption to civil aviation,” a foreign office spokeswoman said as cited by the Guardian newspaper.

Still, NATO faces challenges if it wants to reform into a more responsive and capable alliance.

For years, the U.S. has been critical of its European partners for cutting defense spending, which has steadily declined since 1990 and in many cases has dropped well below the alliance’s benchmark of two percent of GDP.

In 2014, European allies spent around $250 billion on defense, which was a reduction of $7 billion or about 3 percent, according to NATO.

“So, we need to spend more and we need to spend better,” Stoltenberg said. “We have seen some steps in the right direction, but there is a long way to go. We still have a serious mismatch between the security challenges we face, and the resources we are dedicating to our defense, and continuing imbalances — both across the Atlantic, and within Europe itself.”