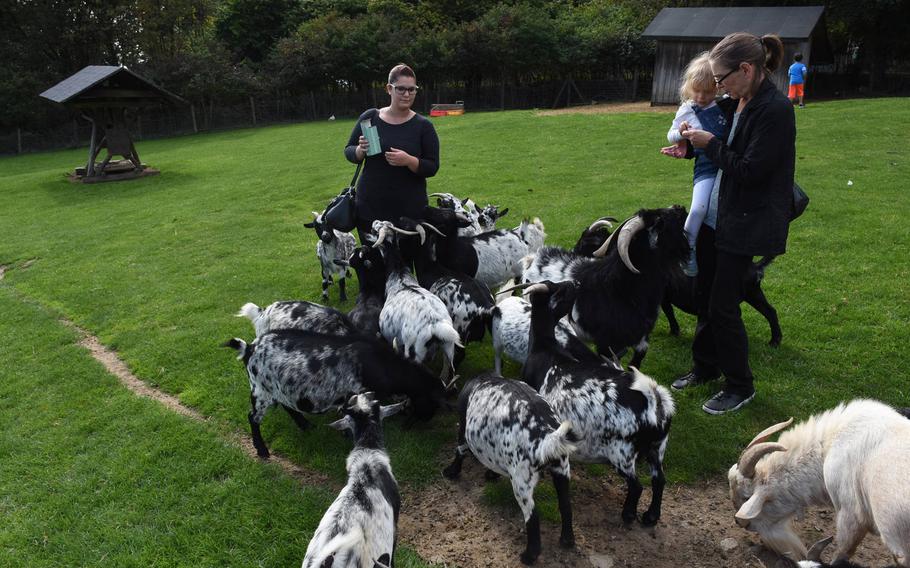 Buy Photo
African dwarf goats vie for handouts at Wildpark Potzberg near Foeckelberg, Germany in 2017. The German state of Rheinland-Pfalz is planning on lifting some coronavirus restrictions next week, including those on zoos and botanical gardens. They can reopen at 25% capacity, with social distancing measures and mask rules in effect. (Jennifer H. Svan/Stars and Stripes)

KAISERSLAUTERN, Germany — German states where U.S. forces are based plan to ease their coronavirus lockdowns with limited store openings, shopping by appointment and reopened outdoor venues next week.

Chancellor Angela Merkel and the country’s 16 governors earlier this month said they would extend the monthslong lockdown until at least March 7, but agreed to several exceptions.

Hairdressers, flower shops and outdoor garden centers will reopen in much of the country beginning Monday, state officials said in Baden-Wuerttemberg, Bavaria, Hesse and Rheinland-Pfalz, which house most U.S. troops in Germany and their families.

Some states, citing declining infection rates, said they would lift more restrictions while closely monitoring cases, and particularly the more contagious variants of the virus.

On U.S. military bases, some barbershops were taking appointments ahead of next week’s planned opening. And the military-affiliated Kaiserslautern Rod and Gun Club announced its ranges would open Friday for hunters and sports shooters.

In Rheinland-Pfalz, which is home to Ramstein Air Base and several Army and Air Force installations, zoos, botanical gardens and similar venues may welcome up to 25% of their customer capacity to their outdoor areas starting Monday, the state said in a statement.

Clothing stores and bridal shops can open their doors to one household at a time by appointment starting Monday, as long as they leave at least 15 minutes between visits for sanitizing.

Also, driving schools can provide instruction and music lessons may resume, as long as they don’t involve singing or wind instruments.

In Hesse, home to U.S. Army Garrison Wiesbaden, the state’s prime minister, Volker Bouffier, said Tuesday he wants to move ahead with more openings, including allowing retail stores to welcome customers by appointment. He also said restaurants should be able to open their outdoor areas by April 1.

More details would be announced Thursday, Bouffier said in a statement.

Bavaria, Germany’s second-most populous state and home to about 40,000 U.S. military personnel and family members, will open its hardware stores and nail salons Monday, a state spokesman said Wednesday. Many shops, such as those located inside shopping malls, will be open for pickup service.

Earlier this month, Merkel said that if Germany can reach a seven-day coronavirus incidence of below 35 per 100,000 people, restrictions could loosen more. No state has reached that number, according to the Robert Koch Institute, the country's health agency.