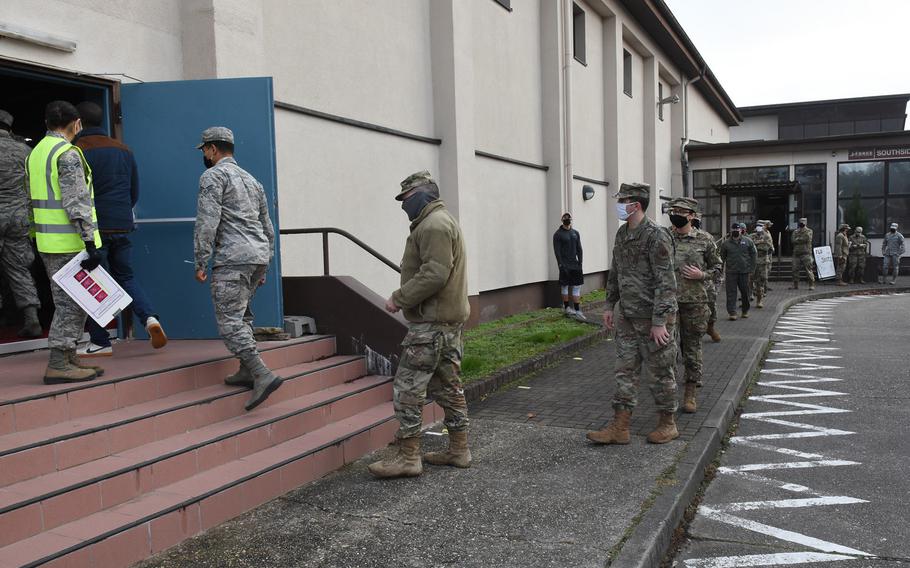 Buy Photo
Socially distanced airmen enter the Southside Fitness Center Annex at Ramstein Air Base, Germany, on Dec. 8, 2020, to get their flu shots. Service members were prioritized for the flu vaccine when it became available in limited doses in the fall. (Jennifer H. Svan/Stars and Stripes)

Buy Photo
Socially distanced airmen enter the Southside Fitness Center Annex at Ramstein Air Base, Germany, on Dec. 8, 2020, to get their flu shots. Service members were prioritized for the flu vaccine when it became available in limited doses in the fall. (Jennifer H. Svan/Stars and Stripes) 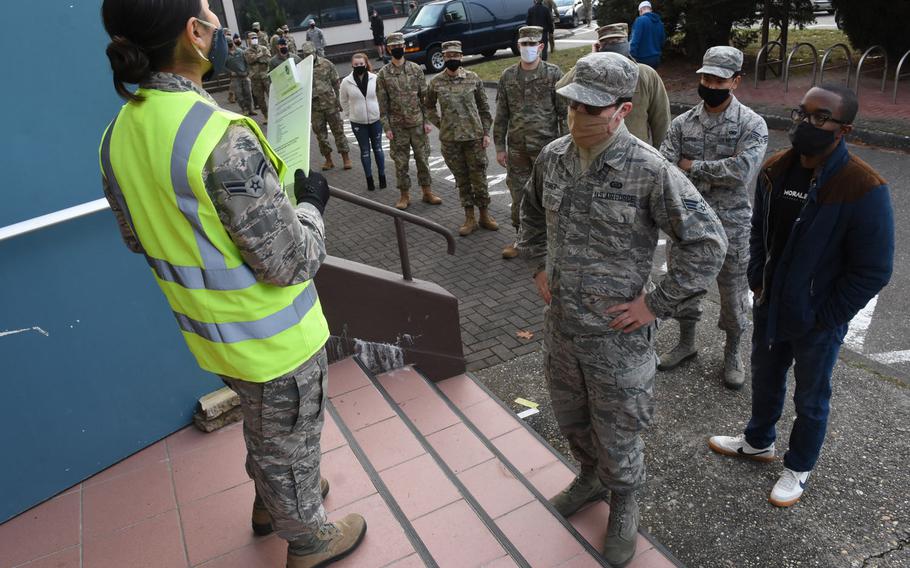 Buy Photo
Airman 1st Class Sofia DeLeon screens airmen in line for the seasonal influenza vaccine outside the Southside Fitness Center Annex at Ramstein Air Base, Germany, on Dec. 8, 2020. The base expects to hold another mass influenza vaccination event next week for those who still have not received their flu shot. A large allotment of the vaccine was delayed getting to Europe this winter, leaving many Americans affiliated with the U.S. military community in Europe without a flu vaccine later than usual. (Jennifer H. Svan/Stars and Stripes)

KAISERSLAUTERN, Germany — A bulk shipment of flu vaccine for Department of Defense personnel and family members has arrived in Europe and is being distributed to base medical clinics that still need the shot, U.S. health and military officials in Germany said this week.

The U.S. military in Europe received about 56,000 doses of the vaccine this week, which “should be more than enough for everyone we still need to vaccinate,” said Gino Mattorano, spokesman for Regional Health Command Europe.

Roughly 70,000 service members and Defense Department employees, many with dependents, live on the Continent, where flu season typically begins in October. A limited supply of flu shots was available earlier in the season, but service members were given priority for jabs then, and many Americans affiliated with the military in Europe were not vaccinated.

The delay in getting the remainder of the flu vaccine to Europe was caused by a coronavirus outbreak and a maintenance issue at the Pentagon’s supplier, Seqirus, said Patrick Mackin, a spokesman for the Defense Logistics Agency.

With the arrival of the new shipment, vaccination clinics are being scheduled across Europe. At some bases, they will be held concurrently but separately with COVID-19 vaccination clinics, officials said. The overlap is not expected to affect the inoculation schedule for either illness, Mattorano said, even though the two vaccines cannot be given at the same time.

The Centers for Disease Control and Prevention recommends a minimum of 14 days between the two vaccinations to allow for better tracking of adverse reactions, and the European Centre for Disease Prevention and Control says anyone who feels ill or has been in close contact with someone infected with the coronavirus in the past two weeks should not have a flu jab.

Landstuhl Regional Medical Center in Germany is planning to hold its flu inoculations jointly with the Air Force at Ramstein Air Base from Jan. 19 to 22, Mattorano said. They will likely hold a mass vaccination clinic, with no advance sign-ups required.

Flu and COVID shots will be administered at two different locations on those days, base officials at Ramstein said.

The flu vaccine will be available at LRMC and Ramstein to people who typically receive shots on base, officials said.

Officials at Spangdahlem Air Base said this week they had still not received additional flu vaccine.

Influenza activity has been lower than usual this season, the European Centre for Disease Prevention and Control said last month. In the United States, less than 1% of nasal and throat samples have been positive for flu, the CDC said last month. The low incidence suggests measures aimed at slowing the spread of the coronavirus may also be limiting the spread of influenza, the CDC said.