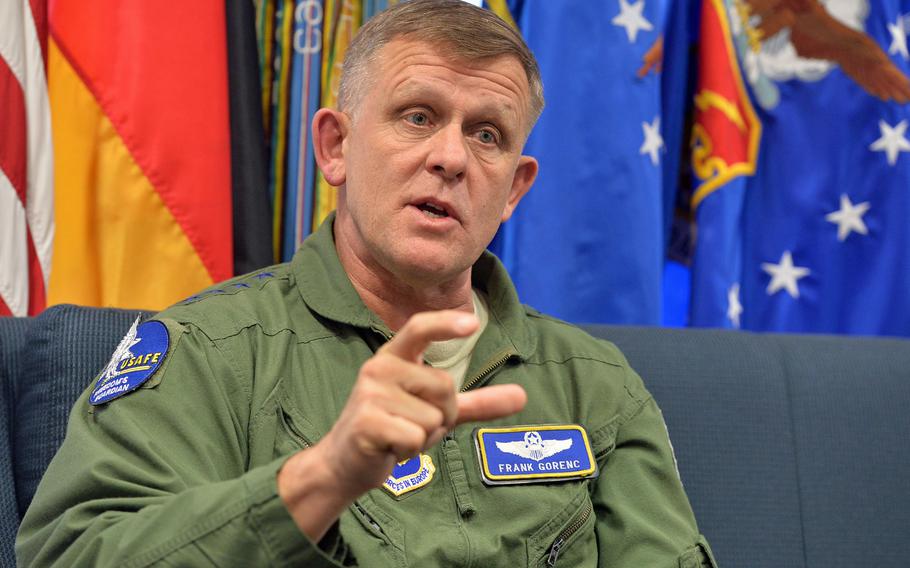 KAISERSLAUTERN, Germany — About 80 airmen from RAF Lakenheath, England, are participating in the multinational exercise in Spain that was the scene Monday of a plane crash that killed 11 military personnel.

At least one of the squadron’s three F-15E Strike Eagles deployed to Spain for the exercise was damaged in the crash, a Lakenheath spokesman wrote in an email. Another “is in such close proximity to the crash site that we haven’t been able to assess damage yet.”

There was no word as of early Tuesday afternoon whether, in wake of the crash, the exercise would continue or the airmen would return to England.

A Greek F-16 fighter jet lost thrust while taking off and crashed into five parked planes on the ground Monday at Los Llanos Air Base in southeastern Spain, according to The Associated Press.

In addition to the two Greek pilots aboard the two-seater jet, nine French airmen were killed.

The initial death toll was 10 but a French airman died from severe burns at Madrid’s La Paz hospital, the Spanish Ministry of Defense said Tuesday.

Twenty French and Italian citizens were injured and four remained hospitalized Tuesday in Madrid undergoing treatment for severe burns, the ministry said, according to the AP.

The crash, which is under investigation, triggered a series of explosions and a fire that took about an hour to put out, AP reported.

Authorities were not able to retrieve the bodies of the 10 people killed at the scene by Tuesday afternoon because workers were cleaning up toxic fuel, the AP reported, quoting Capt. Jose Guerrera, an air force spokesman.

Three French jets and two Italian jets were damaged. A statement from Italy’s Defense Ministry said “numerous” helicopters were damaged, according to the AP.

The aircraft and military personnel were taking part in the Tactical Leadership Program, a multinational effort formed in 1978 to enhance key leadership and mission planning skills needed for NATO operations, according to the U.S. Air Force.

“Once again, this tragic event highlights the significant cost and personal sacrifice made every day by allies and partners alike in the pursuit of the capability and interoperability necessary to assure and deter,” he said in a statement. “Our thoughts and prayers go out to the families and loved ones of those who perished.”

The 10 NATO countries participating in the program are Belgium, Britain, Denmark, France, Germany, Greece, Italy, the Netherlands, Spain and the United States. The exercise began Jan. 19 at Los Llanos Air Base near the city of Albacete and was scheduled to run until mid-February, said Capt. Sybil Taunton, a spokeswoman for U.S. Air Forces in Europe and Africa. It’s been held in Spain since 2009.