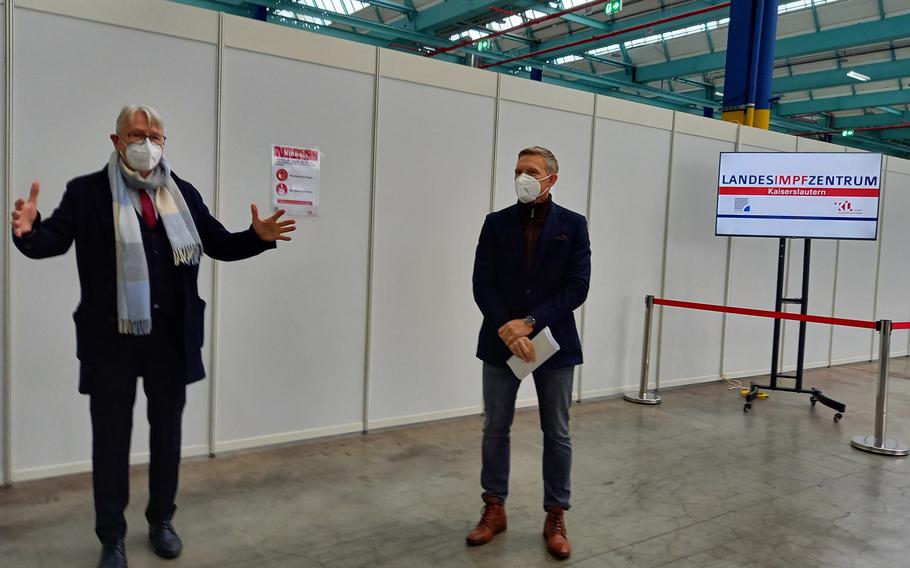 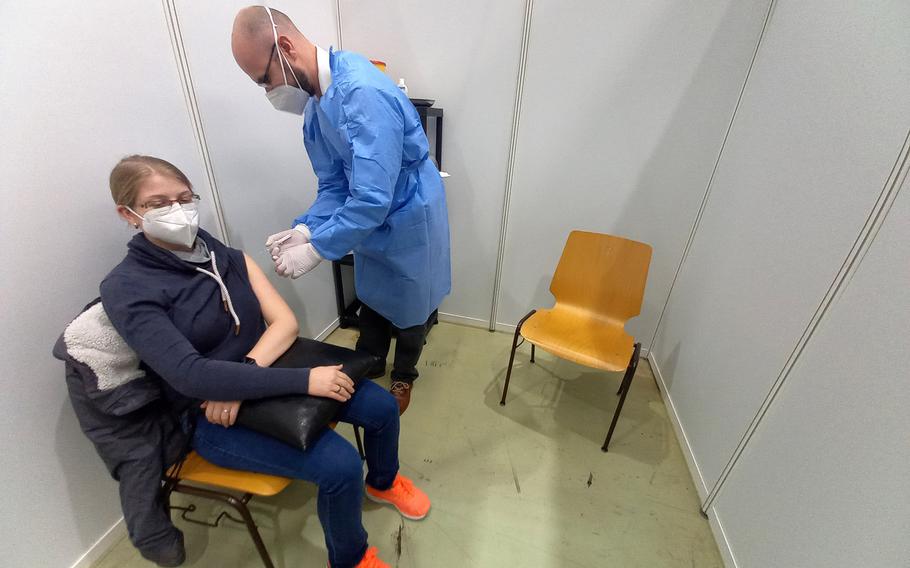 Buy Photo
A simulation of how it will look when people receive their vaccine shots during a presentation for reporters at the coronavirus vaccination center in Kaiserslautern, Germany, Dec. 17, 2020. (Marcus Kloeckner/Stars and Stripes) 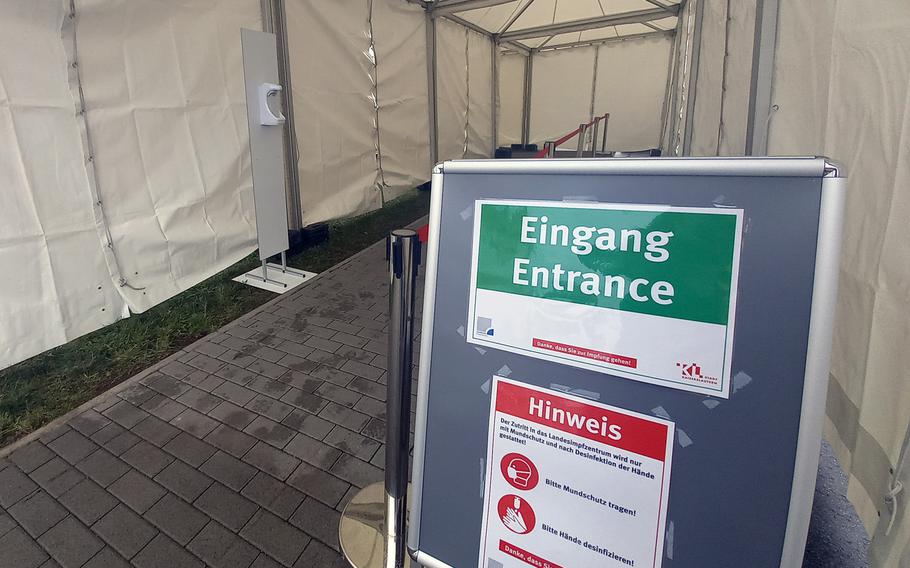 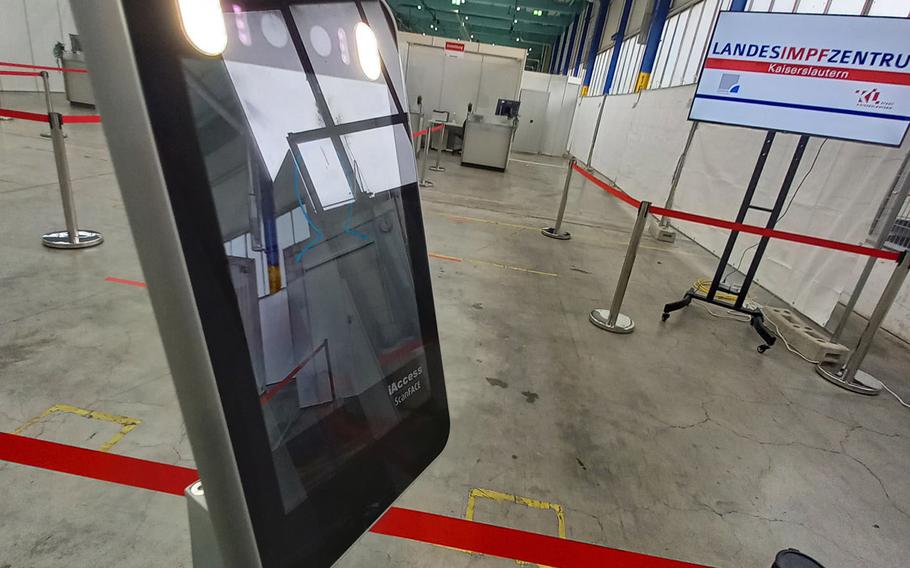 Buy Photo
When entering the Kaiserslautern, Germany, vaccination center, people must first have their temperatures checked at a mobile thermometer station. (Marcus Kloeckner/Stars and Stripes) 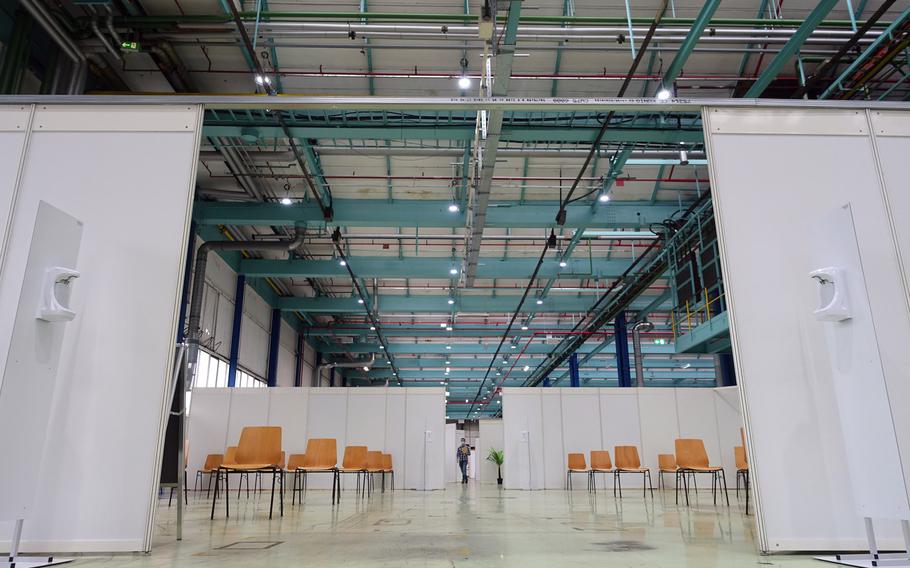 Buy Photo
The waiting room at the Kaiserslautern vaccination center where people will be inoculated against the coronavirus, once the vaccine is approved in Germany. (Marcus Kloeckner/Stars and Stripes) 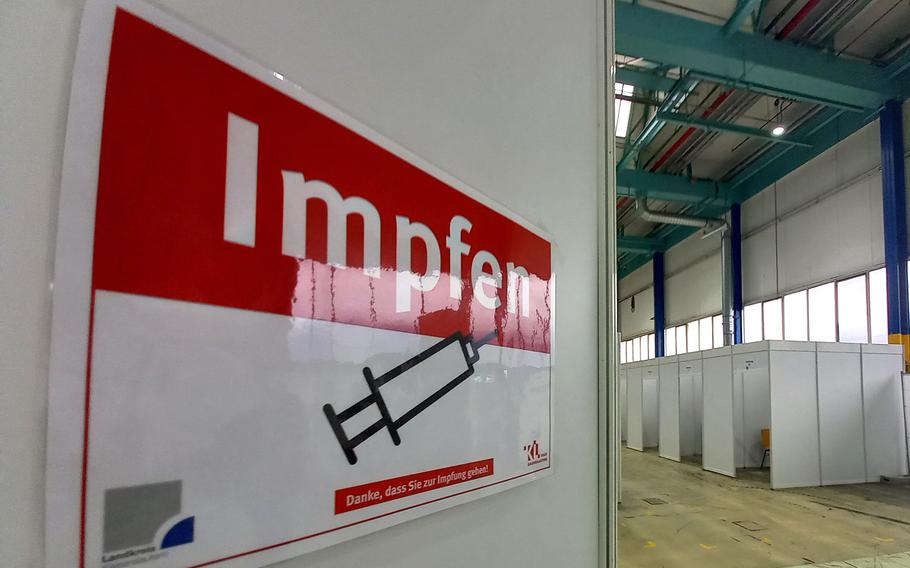 Buy Photo
A sign in German reads ''Vaccinate,'' at the vaccination center in Kaiserslautern, Germany, Dec. 17, 2020. In the background are the ''vaccination cabins,'' where people will be inoculated against the coronavirus once the vaccine is approved in Germany. (Marcus Kloeckner/Stars and Stripes) 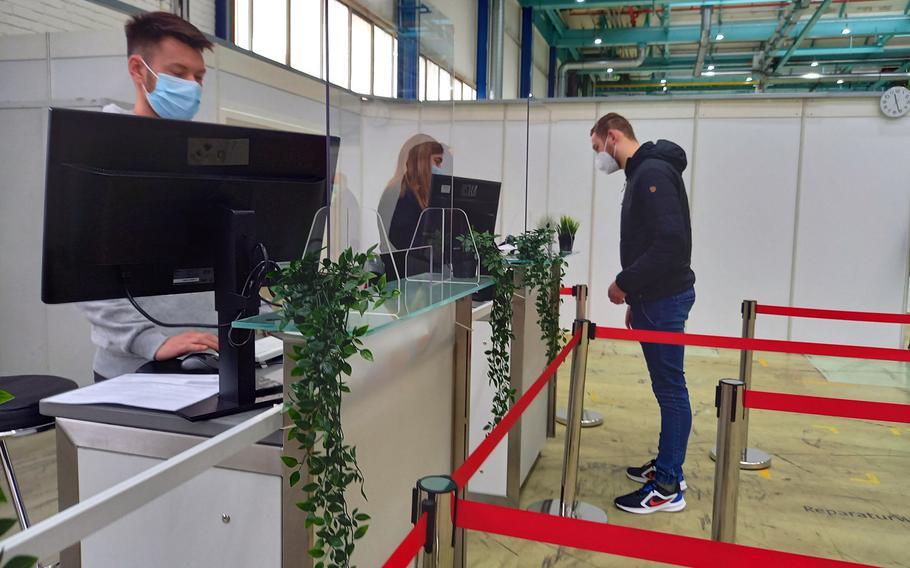 Buy Photo
A person proceeds to a checkout desk in a demonstration of procedures at the coronavirus vaccination center in Kaiserslautern, Germany, Dec. 17, 2020. (Marcus Kloeckner/Stars and Stripes)

STUTTGART, Germany — The U.S. military could begin administering the coronavirus vaccine to health care workers and emergency responders in Europe within days, while German authorities are readying vaccination centers that could be open to military-affiliated Americans in some locations.

“We are prepared to receive (the coronavirus vaccine) as early as next week,” Brig. Gen. Mark W. Thompson, head of Regional Health Command Europe, said in a phone interview Friday.

It’s not yet finalized whether the Pfizer or Moderna vaccine will be administered, but the military in Europe has a preference.

The Moderna vaccine, which was poised for approval by the FDA on Friday, is easier to store and transport, Thompson said. That gives it an advantage for a dispersed U.S. military community in Europe, he said.

If it ends up being the Pfizer version — a vaccine also developed by the Mainz-based company BioNTech — the military has a system in place to handle that as well, Thompson said.

The pilot vaccination phase will begin with personnel at Landstuhl Regional Medical Center and other military clinics in Europe. It will last about a month, since inoculation requires two shots, weeks apart.

At Ramstein Air Base, the vaccine will be offered to first responders, police, firefighters and select healthcare personnel, base officials said.

The aim is to have all personnel who want the shots to be vaccinated within the calendar year, he said, adding the decision to be inoculated is voluntary.

The speed of delivering vaccines to the U.S. military community in Europe will hinge on how fast manufacturers can supply them and how the U.S. government distributes them.

That could raise the prospect of choosing to get a shot off-base at a private health care provider, should a host nation like Germany receive supplies faster than the military.

Thompson said personnel, to include civilians and family members, should consult with their health care provider as vaccines become available.

Still, it isn’t yet clear which communities in Germany will allow military-affiliated Americans to use free vaccination centers off base.

Two German states where U.S. forces are stationed said this week that they would include Americans in the country under the NATO Status of Forces Agreement when they begin vaccinations. They are expected to start in early January, with German health care workers and the elderly first in line.

But in Rheinland-Pfalz, home to about 50,000 U.S. personnel and family members, health officials had a different message Thursday: Americans could be turned away at Kaiserslautern district vaccination centers, despite an earlier statement provided to Stars and Stripes by the state’s health ministry that “members of the U.S. armed forces and their relatives” would be “treated like all other German citizens in the vaccination strategy.”

Kaiserslautern district commissioner Ralf Lessmeister said that he and Maj. Gen. Randall Reed, the commander of Third Air Force, discussed that all Americans in the Kaiserslautern military community that fall under SOFA should receive the vaccine on base.

The only Americans who would be eligible to get inoculated on the German side would be civilians registered with their local city hall, Lessmeister said.

Military officials have long discouraged most personnel from registering, which could subject their government paychecks to questioning by German income tax officials.

Lessmeister spoke to reporters Thursday during a tour of Kaiserslautern’s new vaccination center in the city's west, inside the former part of the Opel factory and near the U.S. Army’s Rhine Ordnance Barracks.

Explaining the discrepancy, Lessmeister said the state health ministry had not communicated with the U.S. military.

In Baden-Wuerttemberg, home to U.S. Army Garrison Stuttgart, the state health ministry said SOFA-status Americans will be treated like Germans and receive the coronavirus vaccine if they show up at off-post vaccination centers.

Americans may use an app or call a phone number to arrange an appointment to receive the vaccine at no cost, the ministry told Stars and Stripes. The producer of the vaccine, medical officials or the state would cover any potential harm the vaccine may cause, a ministry official said.

Government health officials in Bavaria did not immediately say whether they would provide the vaccine to SOFA-status Americans at their vaccination centers.

Germany is still waiting for the European Medicine Agency to approve the vaccination the country will use. When it does arrive, it could take some time before the vaccination is widely available to the general population.

The first group includes people over 80, nursing home staff and select medical workers. The second group is composed of people over 70; those with trisomy 21, dementia and transplant patients; asylum seekers and homeless shelter residents; close contacts of people in need of certain medical care; and pregnant women.

The third group includes people over 60, those with certain chronic diseases; police and firefighters; some government workers, educators and retail workers.