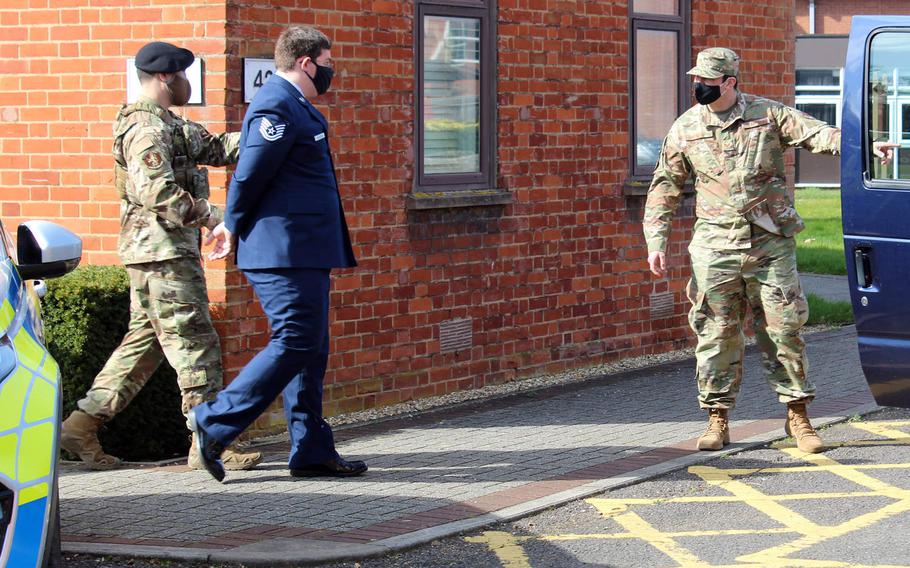 Buy Photo
Tech. Sgt. Garret Souders is escorted following his court-martial at RAF Mildenhall, England, March 25, 2021. Souders was sentenced by a military judge to nine years in prison after being found guilty of charges related to possession and viewing of child pornography. (Kyle Alvarez/Stars and Stripes)

RAF MILDENHALL, England — An airman who participated in child pornography chat rooms and collected thousands of illegal pornographic files was sentenced to nine years in prison after being found guilty of related charges at a court-martial Thursday.

Tech. Sgt. Garret Souders, of the 488th Intelligence Wing out at RAF Mildenhall, was also sentenced by military judge Col. Charles J. Weidie to a reduction to E-1, forfeiture of all pay and a dishonorable discharge.

Souders was found guilty on counts of viewing indecent material and possessing and viewing child pornography but was acquitted of attempted sexual assault of a child and one count of committing a lewd act on a child.

An investigation began in January 2019 after Souders’ wife found chat conversations on his phone, under an alias, that discussed fantasies involving harm to their own family. The wife left the home and reported Souders to the Air Force Office of Special Investigations the following day.

The first few weeks after leaving home “were like a surreal nightmare,” Souders’ wife said during testimony. “I didn’t sleep, I forgot to eat.”

“I cannot begin to express how sorry I am for my actions,” Souders said in an unsworn statement during the sentencing phase of the trial. “I am deeply ashamed of my actions.

“For the rest of my life, I will live with the guilt of hurting my family. I know I am deserving of punishment. I ask that (the court) show mercy.”

Following the trial, the 100th Air Refueling Wing credited the trial team for their efforts in a statement.

“The Government is satisfied with the outcome of the trial … we feel justice has been served,” the statement said.