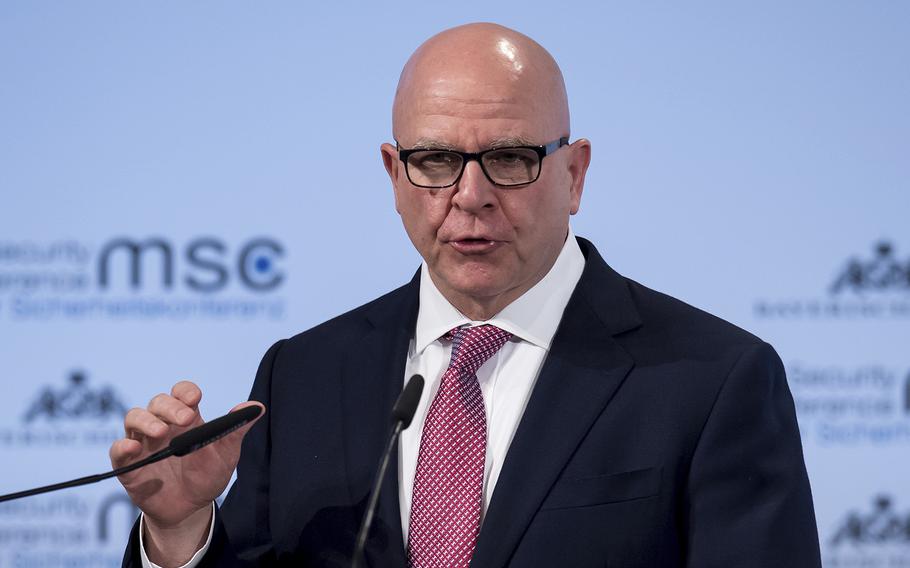 MUNICH, Germany — National Security Adviser H.R. McMaster brought a hard-line message to global leaders here Saturday, saying the international community must do more to isolate North Korea and Iran and must be prepared to take action against Syria for the continued use of chemical weapons.

“It is time for all nations to hold the Syrian regime and its sponsors accountable for its actions,” McMaster said during a speech at the annual Munich Security Conference.

McMaster took shots at Russia when he referred to Friday’s U.S. federal indictment against 13 Russian nationals, saying the evidence of Moscow’s meddling in the 2016 U.S. election was “incontrovertible.”

When asked about the indictments during the conference, Russian Foreign Minister Sergey Lavrov shrugged to the audience, which included McMaster. “Until we see the facts, everything else is just blabber," he said.

McMaster called out Germany, South Korea and Japan for doing business with Iran, which he equated to “cutting a check” for Iranian terrorism initiatives.

“The time is now, we think, to act against Iran,” McMaster said. “Let’s do everything we can to cut off funding.”

He also said that countries that evade full enforcement of an economic blockade against North Korea are "acting irresponsibly.”

McMaster’s remarks were greeted with modest applause in the convention hall at the swanky Bayerischer Hof Hotel, where European leaders have expressed unease with U.S. foreign policy under President Donald Trump. Some allies regard the administration’s policies as bellicose.

Germany’s defense and foreign ministers said what is getting lost in foreign policy is the need for more development initiatives.

During his speech, McMaster emphasized the need for strong alliances, but also said institutions that the West has come to rely on are failing in their mission and need to be reformed. He said some of “the worst offenders” are sitting on the U.N.’s human right.

“We must actively cooperate to protect, reform and strengthen these intuitions so they honor their original aims,” McMaster said.

German Defense Minister Ursula von der Leyen, said Friday that the U.N. needs to be strengthened. “It is a point of concern to us that some of our partners continue to roll back spending on diplomacy, international aid and the United Nations,” von der Leyen said.

It wasn’t just traditional allies in the West that took shots at the U.S.

Turkish Prime Minister Binali Yıldırım accused to U.S. of supporting terrorism in Syria. While Kurdish fighters have been a key part of U.S. strategy in the battle against the Islamic State group, Turkey regards them as an extension of the PKK Kurdish terrorist group — Turkey’s decadesold enemy.

“They are one and the same,” Yıldırım said. “They are the same terrorist organization.”

Turkey’s incursion into Syria to fight Kurdish elements in Afrin has raised concerns that the U.S. and its NATO ally could eventually come to blows. In recent days, the U.S. and Turkey have held hig- level talks involving Defense Secretary Jim Mattis and Secretary of State Rex Tillerson. But differences remain.

“What we are doing in real terms is protecting the borders of NATO. Another NATO member (the U.S.), what they are doing, is they are cooperating with a terrorist organization … on the pretext of fighting against Daesh (ISIS), and we have a hard time understanding this,” Yıldırım said.

Despite these criticisms, leaders acknowledge the trans-Atlantic alliance remains indispensable.

German Foreign Minister Sigmar Gabriel said a rising China means Europe and the U.S. must develop a strategy for being an economic counterweight.

While the U.S. was the insurer of the “liberal world order,” “the U.S. is no longer by far the strongest power in the world,” Gabriel said.

“Powers will shift dramatically with the rise of China,” he said.China’s “New Silk Road” that adds up to a worldwide network of commercial infrastructure is “an attempt to put a Chinese mark on the world,” Gabriel said.

“We in the West are to be blamed that we don’t have a strategy to find a new balance,” he said. “Cooperation with the U.S. and Europe is important for maintaining the architecture of freedom.”

The running theme among European leaders from France and Germany was a need for Europe to become more independent of the U.S. A major area of discussion during talks was the need for the European Union to press forward with plans to get more involved in military matters, which has stoked concerns about competition with NATO.

But Polish Prime Minister Mateusz Morawiecki said the talk of a stronger EU military rings hollow considering that many European countries under invest in defense and are “free riders who live under Pax Americana.”

There was angst among some allies at the conference about the Trump administration's plan to develop new low-yield nuclear weapons. McMaster said the U.S. plans are designed to protect Europe.

The nuclear plan under Trump is aimed at countering Russia, which McMaster said maintains a military doctrine that involves the potential deployment of a low-yield nuclear weapon to blunt a broader crisis.

On the Russian doctrine of “escalate to de-escalate,” McMaster said, “we will not allow Russia to hold the nations of Europe hostage.”