Massive Army exercise in Europe is curtailed amid coronavirus angst 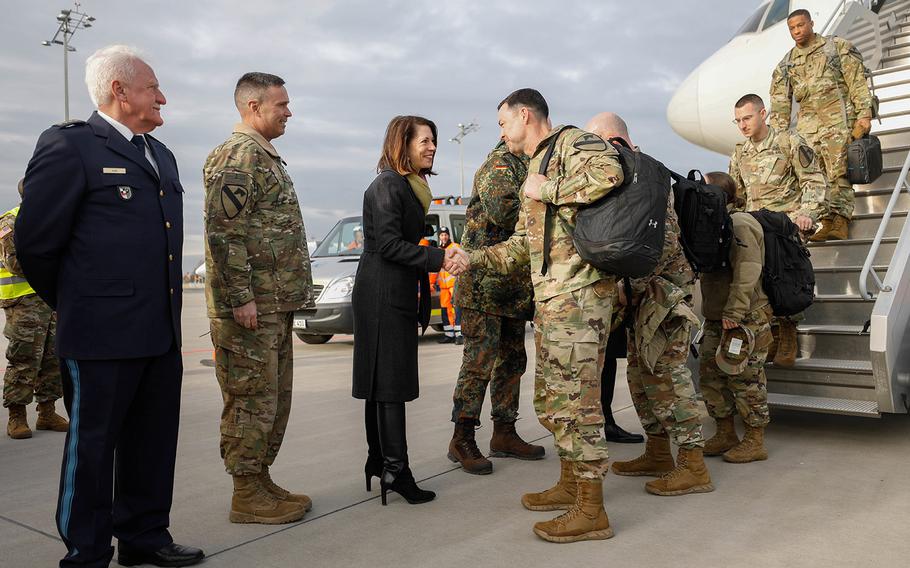 STUTTGART, Germany — The largest U.S. military exercise in Europe in a generation will be scaled back because of concerns about the coronavirus, marking a possible setback for the Army after the service spent years building up for the drill known as Defender-Europe 20.

U.S. European Command said Wednesday that the training, which initially called for sending 20,000 U.S.-based soldiers across the Atlantic Ocean, would be downsized.

“After careful review of the ongoing Defender-Europe 20 exercise activities and in light of the current coronavirus outbreak, we will modify the exercise by reducing the number of U.S. participants,” EUCOM said in a statement

The training will be adjusted, but the military will still work with allies to meet “our highest priority training objectives,” EUCOM said.

In all, more than 35,000 troops were originally slated to take part in Defender Europe, which is already underway and is slated to run until the end of June. Most of the major exercises, including paratroopers dropping into the Republic of Georgia and ground forces rehearsing the defense of territory in the vicinity of the Russian exclave of Kaliningrad, were to take place in April and May.

It was unclear Wednesday whether such large scale drills were still to take place or were among the activities curtailed. U.S. Army Europe said it is still working through the details of the adjustments.

“The decision to make the change is the right thing to do in light of the ongoing outbreak of the coronavirus. The health protection of our force, and that of our allies and partners, is a top priority,” USAREUR said.

For the military, Defender-Europe was designed to showcase the military’s ability to mobilize in large numbers to face off against “near-peer” adversaries. While Russia wasn’t overtly named as the motive for the drills, the idea was to demonstrate the capacity of allies to defend NATO’s eastern flank.

The exercise comes with a price tag of about $340 million. More so, about 15 of 27 planned air missions have been completed so far, bringing 3,500 soldiers to Europe, USAREUR said last week. Four of 10 transport vessels also have arrived, bringing with them 2,700 pieces of equipment, and more than 50 military convoys are underway in Germany and Poland.

EUCOM’s announcement that Defender would be reduced comes after a string of exercise cancellations. On Wednesday, the command also announced a large cold weather exercise underway in Norway was canceled. And last week, a major EUCOM air defense drill in Israel also was cancelled because of the coronavirus.

While EUOCM said the exercises were being curtailed rather than cancelled outright, the decision comes as Europe braces for an increase in coronavirus infections. Italy has been hard hit, and the U.S. military community there largely restricted because of country travel restrictions. Now places where Defender is focused are beginning to grapple with an uptick in coronavirus cases. Germany and Poland, the centerpieces of Defender Europe training, have begun cancelling events with large gatherings in hopes of preventing a swell in cases.

“We take the coronavirus outbreak seriously and are confident that by making this important decision we'll continue to do our part to prevent the further spread of the virus,” EUCOM said.