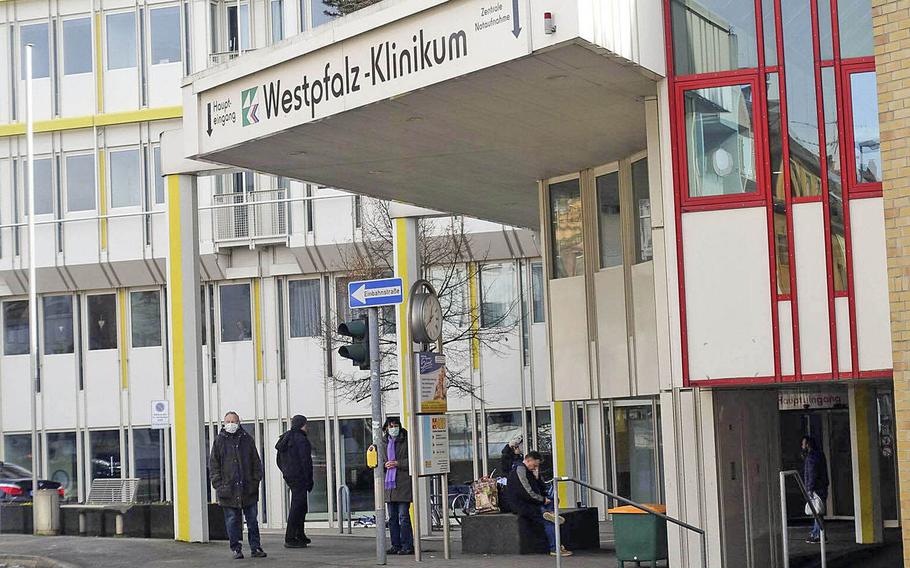 A German employee who works for the 21st Theater Sustainment Command in Kaiserslautern died at the Westpfalz Klinikum on Saturday from COVID-19, the command announced Monday. (Marcus Kloeckner/Stars and Stripes)

KAISERSLAUTERN, Germany — A longtime German employee of the 21st Theater Sustainment Command died of complications related to the coronavirus over the weekend, the command said Monday, marking the first publicly announced death from the virus in U.S. Army Europe.

His age was not provided by the command.

The man’s positive results came Friday after he was tested for the virus two days earlier, the 21st TSC statement said. He died Saturday at the Westpfalz Klinikum, a hospital in Kaiserslautern.

“Our hearts are heavy today losing one of our own,” Helmut Haufe, the support center’s general manager, said in a statement. “While he dedicated more than 30 years of his life in service to the U.S. Government, he was so much more — a husband and friend to many in the community. We mourn that we will no longer be able to share in his spirit for life.”

The Army is working to determine whom the employee had recent contact with and taking measures to ensure they are isolated to prevent further spread of the virus, the 21st TSC statement said.

The virus takes on average of five to six days, and as many as 14 days, to cause symptoms after infection, according to the World Health Organization.

“This is truly a tragic loss and our condolences go out to the family, friends, and co-workers of our employee,” Maj. Gen. Chris Mohan, the 21st TSC commander, said in a statement. “The 21st TSC and U.S. Army Europe remain committed to protecting our service members, their families, and our civilian co-workers.”

It’s unknown how many U.S. military personnel in Europe, including local national employees, have confirmed cases of the virus. Most bases and commands had been reporting positive cases through the weekend, until the Pentagon ordered military units to stop reporting numbers of confirmed infections.

Base leaders at Ramstein said Monday that their numbers would continue to be reflected in the totals included in the broader Kaiserslautern community, as reported by Germany.

As of Sunday evening, 115 people in the Kaiserslautern area were confirmed to be infected with the virus — 54 in the city and 61 in the surrounding county, local German officials said.